While inflation was still connected to factors like supply chain disruptions, Powell said, he no longer believed it was entirely “transitory,” opening the door to faster tapering of the Fed’s economic stimulus. Several outlets partially attributed Powell’s remarks to a drop in stock indexes on Tuesday, following several days of market volatility. Yellen said that pandemic-era stimulus and President Joe Biden’s Build Back Better bill addressed the “very substantial risk” of prolonged economic downturn while being “at most a small contributor” to inflation. Yellen again stressed the danger of not raising or suspending the debt ceiling before the extended Dec. 15 deadline; as of Wednesday, Congress had not yet struck a deal on the issue, but Senate leaders said legislation would come “soon.”

Coverage appeared to only be prominently displayed in business-focused outlets on Wednesday, with most other outlets focused on the Supreme Court’s abortion case. Coverage from the right tended to focus more on Powell’s comments, with some commentators saying he “got it wrong” or “helped cause the inflation he now admits is not merely ‘transitory.’” 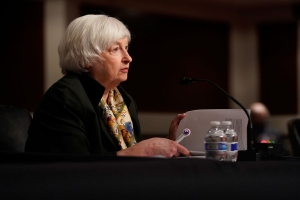 Yellen told the House Financial Services Committee that the stimulus package clearly boosted demand but said it was not a "fair assumption" to say it overshot the need and fueled current spikes in inflation.

"It's certainly true that the American Rescue Plan put money in people's pockets ... and contributed to strong demand in the... 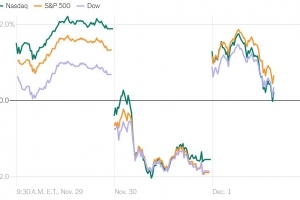 Just as a worrying new variant of the coronavirus has begun to spread, the Federal Reserve chair signaled on Tuesday that the central bank could reduce its support for the economy more quickly, sending a shudder through Wall Street and pushing the S&P 500 negative for November.

A sell-off already in progress accelerated after the chair, Jerome H. Powell, told a Senate committee that inflation was likely to persist well into next year and that the Fed would consider tapering off its purchases of government bonds “perhaps a few months sooner” than...

Read full story
Some content from this outlet may be limited or behind a paywall.
See full media bias rating for New York Times (News)
From the Right
835
Economic Policy
Powell admits Fed got it wrong on inflation, says they should stop calling it 'transitory'
Fox Business 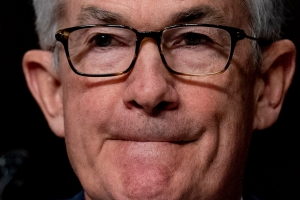 Federal Reserve Chairman Jerome Powell acknowledged Tuesday that he now expects high inflation to continue into the middle of 2022, stating that the government should no longer push what had been a recurring slogan of it being "transitory."

During a hearing before the Senate Banking Committee, Powell noted that when the Fed says "transitory," they do not mean it as just referring to how long inflation will last, as the average person might expect. Still, he said it is time to stop using the word.