A soccer match in Malang, Indonesia turned deadly after a clash between rival fans led riot police to fire tear gas in the stadium. Early reports state 125 people were killed and hundreds more injured. Most of the fatalities were the result of a stampede of people fleeing the stadium after the gas was fired, with many dying of suffocation or trampling.

The response of the police force, which many fans cited as the escalation that caused the deaths, has come under scrutiny from Indonesian President Joko Widodo and FIFA. Videos circulating on social media show police officers beating fans who had run onto the field after the game concluded. At a news conference on Sunday, East Java police chief Nico Afinta defended the police response to the fan brawl, stating “we have already done a preventive action before finally firing the tear gas as (fans) began to attack the police, acting anarchically and burning vehicles.” FIFA security regulations prohibit the use of tear gas in stadiums, but the league has no control over domestic games. In response to the incident, FIFA has requested a report from the Football Association of Indonesia. Indonesia is scheduled to host the FIFA Under-20 World Cup next year.

The incident was covered widely on Sunday. Outlets across the spectrum used the term “hooliganism” to describe Indonesian soccer fans. Initial reports put the death toll at 174, then later revised to 125. Some headlines listed the original number instead of the revised one.

At least 125 people are dead — most of them trampled in a stampede– after violent brawls erupted between opposing fans after a soccer match in Indonesia Sunday, marking one of the deadliest crowd calamities in sporting history.

Authorities initially said that 174 people had been killed in the chaos, but the death toll had been revised after officials learned that some victims had been counted twice, according to East Java Deputy Governor Emil Dardak.

Numerous fights broke out among rival fans at the Kanjuruhan Stadium in East Java province’s... 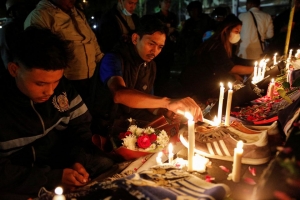 A stampede at a soccer stadium in Indonesia has killed at least 125 people and injured more than 320 after police sought to quell violence on the pitch, authorities said on Sunday, in one of the world's worst stadium disasters.

Officers fired tear gas in an attempt to disperse agitated supporters of the losing home side who had invaded the pitch after the final whistle in Malang, East Java, on Saturday night, the region's police chief Nico Afinta told reporters.

"It had gotten anarchic. They started attacking officers, they damaged... 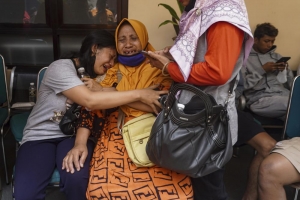 Police firing tear gas after an Indonesian soccer match in an attempt to stop violence triggered a disastrous crush of fans making a panicked, chaotic run for the exits, leaving at least 125 people dead, most of them trampled upon or suffocated.

It was among the deadliest disasters ever...