The United States Navy downed an Iranian drone near the Strait of Hormuz on Thursday morning, according to the Pentagon. President Donald Trump said Navy battleship USS Boxer destroyed the drone after it came within 1,000 yards of the ship and ignored multiple attempted radio calls.

Media outlets across the political spectrum highlighted recent tensions between the US and Iran. Some also pointed out that Iranian foreign minister Mohammad Javad Zarif denied knowledge of any downed drones this morning at a United Nations meeting. 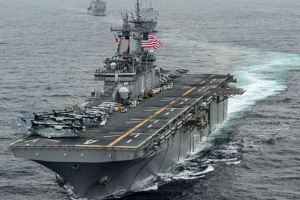 President Donald Trump said Thursday that the U.S. Navy has destroyed a drone controlled by Iran, calling the unmanned vehicle's approach of an American ship a 'provocative and hostile' act.

The conflict came in the Strait of Hormuz, the only shipping lane between the Persian Gulf and the open ocean. About one-fifth of the world's oil passes through it.

Trump said at the White House that the USS Boxer, a Wasp-class amphibious assault ship, 'took defensive action' after the drone strayed to within 1,000 yards.

'The drone was immediately destroyed,'... 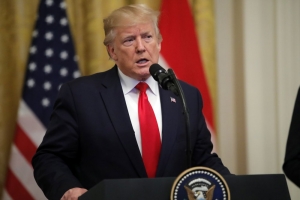 WASHINGTON (AP) — A U.S. warship on Thursday destroyed an Iranian drone in the Strait of Hormuz after it threatened the ship, President Donald Trump said. The incident marked a new escalation of tensions between the countries less than one month after Iran downed an American drone and Trump came close to retaliating with a military strike.

In remarks at the White House, Trump blamed Iran for a “provocative and hostile” action and said the U.S. responded in self-defense. 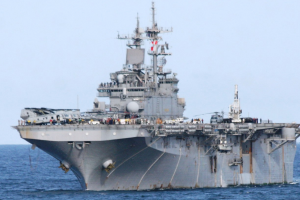 President Donald Trump on Thursday said that a U.S. Navy ship "destroyed" an Iranian drone over the Strait of Hormuz — the latest in a series of tense incidents between Washington and Tehran.

Trump told reporters at the White House on Thursday that the USS Boxer — a U.S. Navy amphibious assault ship — “took defensive action” against the Iranian drone that had “closed into a very, very near distance, approximately 1,000 yards” and ignored “multiple calls to stand down.”

The drone was “threatening safety of the ship and the...