The U.S. Senate passed the $1.9 trillion COVID-19 relief package early Saturday morning, after a 27-hour marathon overnight session. Senators voted 50-49, with every Republican voting against the bill, and with one Republican absent. The package kept $1,400 in direct payments for Americans under a certain income threshold and $350 billion to help state and local governments reopen, but scaled back unemployment benefits to $300 a week until early September, and cut a federal $15 minimum wage proposal amid pressure from moderate Democrats. On Saturday morning, President Joe Biden told reporters the package was "one more giant step forward" on delivering on his promise for more pandemic relief. Republican lawmakers heavily criticized the bill; Senate Minority Leader Mitch McConnell said "the Senate has never spent $2 trillion in a more haphazard way or through a less rigorous process." The legislation will be sent to the House for approval before it reaches Biden's desk.⁣
⁣
The story received wide coverage from across the political spectrum. Left-rated outlets tended to provide analysis of various items on the bill. Coverage from some center- and right-rated outlets highlighted the tension between moderate and progressive Democrats, as well as the criticism the bill received from Republican lawmakers.⁣

3/6/21: This story has been updated for clarity on stimulus payment caps at 2:30 pm PST 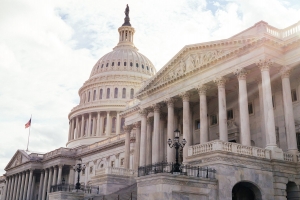 The Senate voted 50-49 to pass Democrats’ $1.9 trillion coronavirus relief package on Saturday, after a marathon session of voting on various amendments.

The bill was passed via budget reconciliation rules, which allow a simple majority to approve legislation in place of a filibuster-proof 60-vote threshold. The Biden administration had been pushing to pass the legislation before the week of March 14, when pandemic-related federal unemployment assistance is scheduled to expire.

Read full story
Some content from this outlet may be limited or behind a paywall.
See full media bias rating for National Review
From the Left
13320
Coronavirus
Senate Approves $1.9 Trillion COVID Relief Bill Without Any Republican Support
Slate 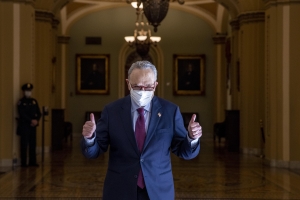 The Senate ended a 27-hour marathon overnight session Saturday by narrowly passing a $1.9 trillion COVID-19 relief package. Senators voted 50-49 along party lines with one Republican—Sen. Dan Sullivan of Alaska—absent. The approval got Democrats one step closer to fulfilling one of the biggest early priorities for President Joe Biden. Now the bill must go back to the House of Representatives. Although a small group of moderate Democrats pushed some changes in the final bill that angered progressives that isn’t expected to lead to a rejection of the measure in...

Read full story
Some content from this outlet may be limited or behind a paywall.
See full media bias rating for Slate
From the Center
13320
Coronavirus
Senate passes Biden’s COVID relief bill along party lines, sending legislation with $1,400 stimulus checks to House
USA TODAY 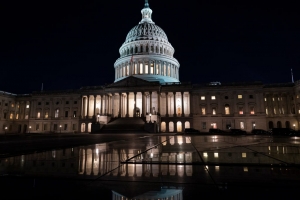 The Democratic-controlled Senate Saturday overcame Republican roadblocks and a debate that lasted beyond 24 hours to pass President Joe Biden's $1.9 trillion COVID-19 relief package which would provide millions of Americans with $1,400 direct payments, billions of dollars for vaccine distribution, and funds to help reopen schools and colleges.

The chamber passed the bill following a session that began around 9 a.m. Friday and ended at approximately 12:30 p.m. on Saturday, aft a "vote-a-rama" of proposed changes from both parties. The final vote was 50-49 with all Republicans voting against...

How the Pandemic Did, and Didn't, Change Where Americans Move

The pandemic raised the possibility that more workers could move anywhere, potentially scrambling the map of booming and declining places in the American...

Signs of Economic Hope Are Growing, Some With Superlatives

The American economic recovery is gathering steam, renewing confidence that a vibrant revival awaits as the pandemic recedes. After months of false starts,...

Family grocery bills are on the rise due to pandemic disruptions, with prices up by 2.6 percent from January 2020 — but unless shoppers are taking notes, it...

American Airlines plans to resume hiring pilots this fall, the carrier told aviators on Tuesday, as a rebound in demand prompts airlines to rethinking their...

Stocks are at all-time highs and the U.S. economy is booming. So why is everyone so freaked out?
ANALYSIS

Peter Andersen, a Boston-based money manager, started 2021 feeling upbeat. “I think this is going to be one of the historic recoveries, up there with the...

Unemployment claims declined to the lowest level since the pandemic struck last spring, adding to signs the U.S. economic revival is picking up speed....

Top Federal Reserve policymakers on Tuesday underscored their concern that Black and Hispanic people are sharply underrepresented in the economics field, which...

The number of Americans filing first-time jobless claims last week fell to the lowest level since the onset of the COVID-19 pandemic, according to the Labor...

Everything Is Infrastructure
OPINION

Biden's $1.5 Trillion Budget Request Would Fund All Nails Needed for the Coffin of Fiscal...
OPINION

Despite the record amounts of money the federal government has spent over the last year responding to the pandemic—and the record deficits it's racked up in...

Economists had forecast a decline to 680,000 from the previous week’s 719,000. This is the second consecutive week in which initial jobless claims moved up in...