President Trump on Saturday pulled out of the G7 summit agreement hours after the White House announced they would sign it. Trump tweeted that Canadian Prime Minister Justin Trudeau had been "meek and mild" during meetings and was "dishonest" in the final press conference, in which Mr. Trudeau said that Canada will institute retaliatory tariffs and “will not be pushed around” by the U.S. 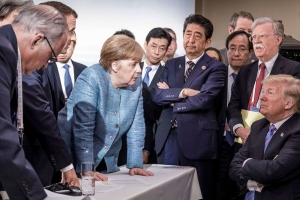 President Trump alienated the United States’ closest allies at the Group of Seven summit in Canada with his aggressive trade declarations and surprising suggestion that Russia be readmitted to the exclusive club of major economic powers — and then, after departing early, went on Twitter to blow up the agreement forged at the meeting.

President Donald Trump said Saturday the U.S. wouldn’t endorse the final communiqué of the Group of Seven industrial nations summit and threatened to impose auto tariffs in a statement on Twitter in which he insulted the Canadian prime minister.

President Trump lashed out at Canadian Prime Minister Justin Trudeau for being “dishonest” and “weak” and informed U.S. officials not to affirm the communique signed by the other G-7 members.

Indonesian rescuers pulled out body parts, pieces of clothing and scraps of metal from the Java Sea early on Sunday morning, a day after a Boeing 737-500 with...

EU’s ‘Climate Leader’ Explains Why 2020 Has Left Him Optimistic

The author of one of the most ambitious climate plans in the European Union says 2020 was a turning point that’s left him optimistic about the future of the...

The COVID-19 vaccine developed by the University of Oxford and AstraZeneca wasn’t the first to be OK’d by regulators in the U.K.—health officials authorized...

Transatlantic alliance due for a reset. But what about China?
ANALYSIS

As tweets go, certainly by the standards of the outgoing Trump administration, it was downright benign, the cyber equivalent of a tap on the shoulder. Yet it...

The US Centers for Disease Control and Prevention will begin requiring a negative COVID-19 test from international travelers. Robert R. Redfield, the CDC...

German Chancellor Angela Merkel said she believes Twitter and other social media companies' decision to ban President Donald Trump from their platforms is "...

The United Kingdom is set to approve a COVID-19 vaccine that drugmakers say is effective in fighting the new variant of the coronavirus spreading around the...

Brexit came down to the wire but it arrived Thursday, with a new trade deal between the United Kingdom and European Union. Arguments about whether this is a...