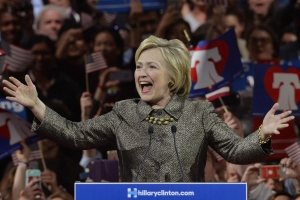 Celebrating another strong night of primary victories, an ebullient Hillary Clinton sought to paper over the schisms that her rivalry with Senator Bernie Sanders has exposed in the ranks of the Democratic Party insisting that “there is much more that unites us than divides us”. 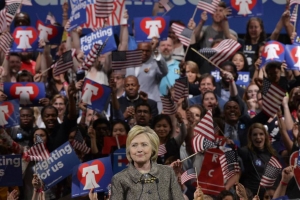 Hillary Clinton swept to primary victories over rival Sen. Bernie Sanders in Pennsylvania, Maryland and Connecticut Tuesday night, winning the three largest prizes of the evening and capturing Delaware and Connecticut in a showing that makes her the all-but-certain Democratic presidential nominee.

Pulling Away From Bernie Sanders, Hillary Clinton Is Turning to the Fall
New York Times (News)

After months of trying to sideline an unexpectedly deft and well-financed liberal opponent, Hillary Clinton on Tuesday won a series of primaries that freed her to present herself as the de facto victor of the Democratic nominating fight, and gave her the impetus to shift focus decisively toward the November election.