US left Bagram Airbase at night with no notice, Afghan commander says

World, US Military, Afghanistan, Foreign Policy
Save for Later
From The Center 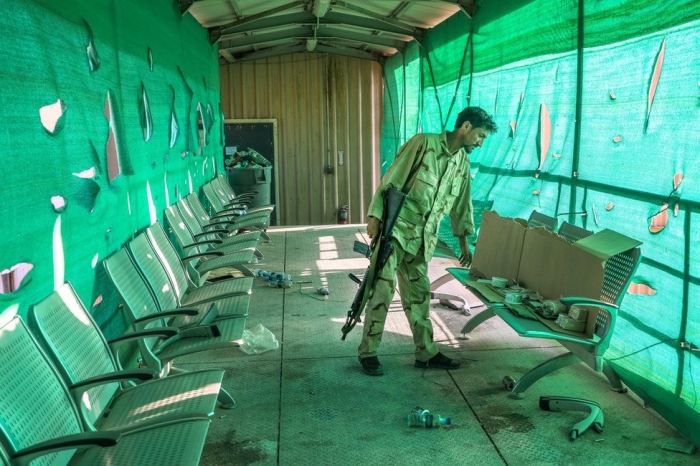 The US military left Bagram Airfield - its key base in Afghanistan - in the dead of night without notifying the Afghans, the base's new commander said.

General Asadullah Kohistani told the BBC that the US left Bagram at 03:00 local time on Friday, and that the Afghan military found out hours later.

Bagram also contains a prison, and there are reportedly up to 5,000 Taliban prisoners left in the facility.

The Taliban have been advancing rapidly in Afghanistan as US troops withdraw.

Go ad-free! Support AllSides.
About these ads
More news about US Military
https://www.bbc.com/news/world-asia-57682290

Pentagon acknowledges Aug. 29 drone strike in Afghanistan was a tragic mistake that killed 10...

The Pentagon acknowledged on Friday that a U.S. drone strike in Afghanistan on Aug. 29 that officials said was necessary to prevent an attack on American...

President Biden said Wednesday that he has “great confidence” in Gen. Mark A. Milley, the chairman of the Joint Chiefs of Staff, after a new book revealed that...

Top general was so fearful Trump might spark war that he made secret calls to his Chinese...

Twice in the final months of the Trump administration, the country’s top military officer was so fearful that the president’s actions might spark a war with...

Gen. Mark Milley, the chairman of the Joint Chiefs of Staff, placed roadblocks in front of former President Donald Trump’s ability to launch a nuclear strike...

The Biden administration has asked 18 members of military service advisory boards, including 11 officials appointed by former President Trump, to resign or be...

Is It True That Military Members Have to Be Vaccinated but White House Employees Don’t?
FACT CHECK

A viral Instagram post, based on a video from Charlie Kirk, claims: “The White House doesn’t mandate the vaccine for its employees but is making active...

If the China Story Is True, Milley Has to Go
OPINION

Iagree with our editorial that General Mark Milley should be aggressively investigated and, if the Washington Post reporting is...

The top military official in the United States promised to give his Chinese counterpart advance notice if former President Donald Trump decided to...

US evacuates 4 more Americans from Afghanistan by overland route

On Monday, in what is the first known evacuation of American citizens since the complete withdrawal of US troops from Taliban-controlled Afghanistan, four...

Money Down The Toilet In Afghanistan
OPINION

This sign of American decadence and stupidity in Afghanistan cannot be improved on. The Spectator columnist Cockburn reports on America’s...