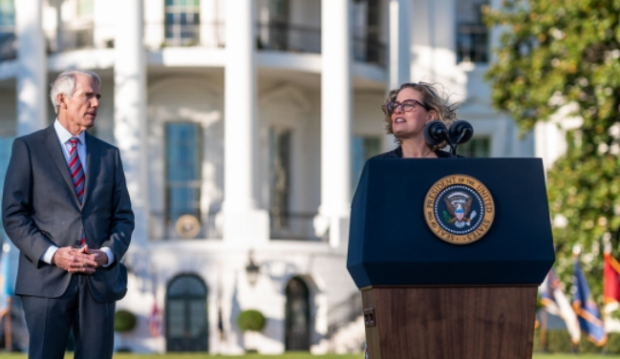 Is Kyrsten Sinema a visionary or an opportunist? Is she laying the groundwork for a new era of collaborative politics, or is she desperately scrambling to find a path for re-election?

The answer is probably all-of-the-above. When Sinema announced last week that she was leaving the Democratic Party to register as an independent, there’s no question that her own political self-interest – and survival – was a driving force behind her decision. Along with her colleague Joe Manchin of West Virginia, Sinema has emerged as a vocal leader of the small band of centrist Senate Democrats. This has made her either a necessary counterbalance or a frustrating holdout against the more progressive voices in her party.

But her penchant for individualism and iconoclasm has caused her poll numbers among Arizona Democrats to plummet  and it’s difficult to see how she would have won a party primary to retain her Senate seat two years from now. Seeking re-election as an independent will be a challenging path as well, but almost certainly offers her a better opportunity to stay in office.

Sinema’s upcoming balancing act carries immense ramifications beyond Arizona’s borders. In the short term, Senate Democrats were already facing an uphill battle to retain their majority in the 2024 elections. The prospect of Sinema and a Democratic opponent cutting into each other’s support greatly increases the chances of a Republican victory, especially if avowed non-Trumpian former governor Doug Ducey decides to enter the race. Senate Majority Leader Chuck Schumer will have to decide whether to support an incumbent ally (Sinema will continue as a member of the Democratic caucus, like fellow independents Bernie Sanders and Angus King) or move party resources behind a Democratic challenger.

Sinema’s decision becomes even more interesting in the context of the rapidly growing number of Americans who are unhappy with both of the two major parties. The number of self-described independent voters as skyrocketed across the country in recent years, and it’s easy to see how many of them could become intrigued by the Arizona Senator’s new standing. The most plausible path for Sinema’s re-election would come as a result of support from a precarious coalition of non-woke Democrats and non-Trump Republicans joining with her fellow non-aligned independent voters. That example could potentially be imitated by similar partnerships in other states, where other voters who have become wary of the dominance of the ideological extremes might be receptive to a more rational alternative.

Since Ross Perot’s presidential campaign thirty years ago, a generation of centrists and reformers have dreamed of the emergence of a viable third party. Their wishes have not yet been granted, largely because of the structural advantages enjoyed by the two parties that help them undermine potential challenges and the ideological flexibility that allows them to craft emerging policy alternatives. But the increased polarization of American politics has created a larger vacuum between the deep red and blue extremes that dominate the national dialogue.

The odds are against it. In addition to the complications outlined in the preceding paragraph, perhaps the most daunting obstacle is the ingrained habits of the country’s voters, who have become accustomed to intuitively responding to the ‘D’ or ‘R’ after a candidate’s name on the ballot. Helping them to understand what is signified by an ‘I’ will be a formidable communications challenge for even a lavishly funded campaign.

Sinema’s potential success – and that of her potential imitators – will therefore rely heavily on the willingness of large-scale donors to open their checkbooks and provide her with a considerable financial advantage over party-backed foes. Those wealthy contributors tend to gravitate toward the political center, but it’s an open question over whether they will resist the entreaties of Schumer and Mitch McConnell and abandon their long-standing party loyalties.

The other wild card in this mix is how young voters will react to this new option. Millennials and Gen Z-ers are even more likely to reject existing binary choices than the rest of the electorate. Unlike their parents and grandparents, who grew up with three television networks and five buttons on the car radio – and two political parties – these young people are accustomed to having an unlimited number of entertainment and information alternatives at their disposal at all times. The question is whether a third option will appeal to them enough to help upend the existing political order.

It seems like an unlikely starting place for a revolution. But few successful revolts throughout our history have begun in expected ways.