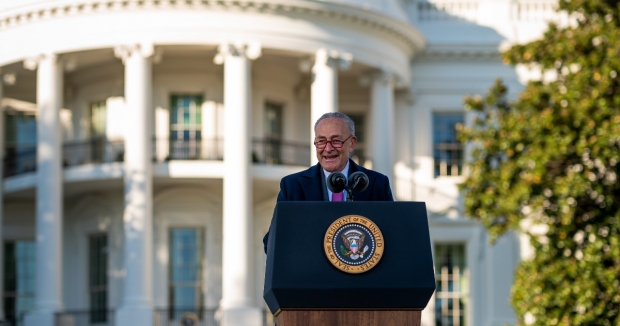 The preferred cartoon analogy for a hapless and easily fooled political figure is the image of Charlie Brown preparing to kick a football before Lucy pulls the ball away at the last minute. But for Senate Majority Leader Chuck Schumer, who has yet again careened into a solid brick wall of solid opposition from within his own party, the better comparison might be Wile E. Coyote, the infamous protagonist from the Roadrunner series.

Unlike Lucy, the Roadrunner never pretended to have any goals other than his (her?) true aspirations, but the coyote never seemed to understand that pursuing the same objective in the same way was not going to lead to a different outcome.

The same case could be made by Senators Joe Manchin and Kyrsten Sinema, who have been remarkably consistent in telling Schumer and President Joe Biden what types of legislation they will not support. But time after time, Schumer has spent the last several months somehow expecting Manchin and Sinema to do something other than drop the political equivalent of an anvil on his head.

Wile E. Schumer is likely to meet a similar end this week, when barring an unlikely and unprecedented turn of events, his efforts to pass Biden’s voting reform legislation will disappear in a cloud of dust at the bottom of the congressional canyon. The difference between the senator and the coyote, though, is that Schumer has a superior to whom he answers. And every time Schumer ends up lying on the ground with stars circling over his head, the president of the United States ends up lying there with him.

After Biden and Schumer learned that they would not be able to convince Manchin to support the president’s Build Back Better climate change and social spending legislation, they then shifted their focus to two voting reform bills to which Manchin had also announced his opposition. Unlike Build Back Better, Sinema does support Biden’s voting package. Yet she is just as intractable in her opposition to suspending the Senate filibuster on this issue as any other, and Schumer’s expectation that she might change her mind are leading him – and Biden – down yet another blind alley.

Schumer’s defenders might argue that he is merely implementing the wishes of a politically maladroit White House. Yet more effective legislative leaders like Nancy Pelosi, Tom Daschle, and Mitch McConnell have possessed both the knowledge of their own caucuses and the self-confidence to pass on realistic guidance to their president to help him steer clear of unnecessary disaster and embarrassment. Schumer seems to lack at least one of those qualities.

What makes the strategy to pursue an unwinnable fight on voting reform even more puzzling is that just the type of bipartisan victory that Biden adores is sitting within Schumer’s reach – in the same policy area. For weeks, Senators of both parties have been talking about reforming the Electoral Count Act, an opaque artifact from the late 19th century that was designed to provide guidance on how election results should be certified. A legislative fix that clarified the ECA could prevent a repeat of the horrors the nation experienced in the weeks after the 2000 election, when Donald Trump and his allies attempted to take advantage of loopholes and ambiguities in the Act to overturn Biden’s victory.

Trump’s critics have been warning of a repeat of the 2020 debacle for more than a year. A repair of the ECA would protect against that possibility, by dramatically raising the threshold for constitutional challenges and eliminating any confusion of the purely ceremonial nature of the vice president’s role in the vote-counting process. In other words, it would actually address the threat that Schumer and many others have been warning about.

By contrast, Biden’s current voting legislation does not focus on these types of post-election remedies but rather includes a variety of measures designed to reform voting processes that take place before elections. Some of these ideas are laudable, some less so, but all are controversial, none are passable, and none would impact the post-election confusion that led to the January 6 Capitol riots last year.

Once they have been defeated again this week, Schumer and Biden will turn to the Electoral Count compromise that has been sitting there for them for quite some time. The question is why Schumer decided to run head-first into one more wall before taking a win that was there for him all along.