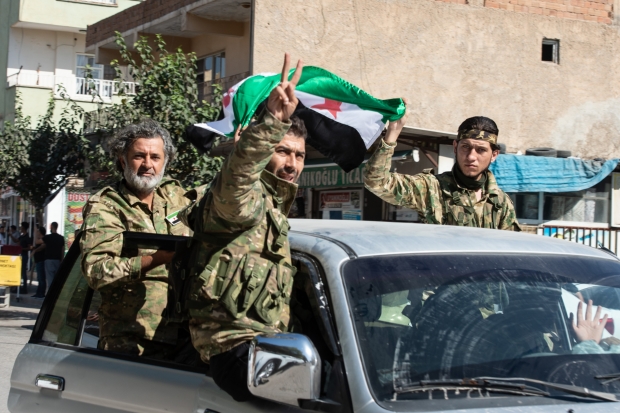 Tracking impeachment: The White House wrote a letter to the House of Representatives on Tuesday, calling the impeachment inquiry into president Donald Trump "unconstitutional" and refusing to comply with it. Former Vice President Joe Biden publicly called for Trump to be impeached at a New Hampshire campaign event on Wednesday.

Turkish ground troops began an offensive against Kurdish fighters in northeastern Syria this week as President Donald Trump decided to pull 50 U.S. troops from the region.

U.S. forces joined the Kurds and Syrian Democratic Forces (SDF) in the region to fight terrorism back in 2014. Trump has publicly defended his decision to pull back, warning Turkish President Recep Tayyip Erdogan of repercussions if his forces "wipe out" the Kurds.

The decision to move U.S. troops out of the area has been met with criticism from all sides of the political spectrum. Both supporters and critics of the decision focused on the supposedly small number of troops who were removed from the region.

From The Blog: Leave Comedy Alone. As passionate attacks on offensive speech and sweeping defenses of free expression follow comedy into the national spotlight, AllSides' Henry Brechter argues that we're taking humor — and ourselves — a bit too seriously.

"The long-time intelligence official said Trump's strategy could be described as "reverse gear" foreign policy. "Make the decision in a tweet or with a tiny group of advisers, throw it out the door, let people—including experienced foreign policy hands—react, then flip-flop if a critical mass of objections appears.""

"Trump's Syria withdrawal prompted criticism from across the political spectrum. The president has defended his actions, suggesting there is no longer a need for U.S. troops to be stationed in northeastern Syria. The Kurdish-led Syrian Democratic Forces, now fighting the invading Turkish army and its proxies, bore the brunt of the Western-backed campaign against the Islamic State militant group (ISIS). At least 12,000 SDF fighters were killed in the fighting."

"By Thursday morning, Turkey had conducted 181 airstrikes in the area, its Defense Ministry said. The Turks also used cranes to remove parts of a concrete border wall, allowing Turkish troops and military vehicles to enter Kurdish-held territory in northern Syria."

"The fighting, which began on Wednesday, marks a new stage in an eight-year-old Syrian civil war that began in 2011 as a wave of protests against President Bashar al-Assad of Syria, but which has since escalated into a complex military conflict involving foreign armies and local militias formed of a wide range of actors including former regime officers, Islamist extremists — and Kurdish nationalists."

"It is undeniable that the Kurdish forces’ relationship with the United States has turned the Rojava project into something more than an attempt at direct democracy and Kurdish self-rule. Until 2015, the YPG was concerned mainly with keeping other militant groups out of Kurdish areas. After US special forces intervened to keep ISIS from taking the Kurdish city of Kobanî, the Pentagon began a formal alliance with the YPG, supplying them with weapons and planning joint operations involving coalition airstrikes. The problem was that by partnering with the YPG, the United States was strengthening the enemy of a NATO ally."

"Information about the rising death toll came as Turkey's state-run news agency said Turkey-allied Syrian opposition fighters have "cleared of terror" two villages across the border in Syria — meaning there are no more Syrian Kurdish fighters in those villages. Turkey has long threatened to attack the Kurdish fighters whom Ankara considers terrorists allied with a Kurdish insurgency in Turkey."

"The military operation was launched this week after President Trump made a heavily criticized decision to pull back U.S. troops in the area, paving the way for an assault."

"President Donald Trump said Wednesday he would “wipe out” Turkish President Recep Tayyip Erdogan’s economy if Turkey’s military operation in Syria eliminates the Kurdish population. The president was expanding on his administration’s Sunday decision to pull the remaining U.S. troops out of northern Syria during a Wednesday White House press conference."

"Trump said Turkey and Syria have “been fighting each other for centuries” and the U.S. was “put into this battle — interjected. It was supposed to be a 30-day period, and we’ve been there for many, many years. We’re speaking to both sides. We’ve told President Erdogan how we feel. We’re getting out of the endless wars.”"

"There are no easy answers in Syria. While the ISIS caliphate is in ruins, ISIS itself is still potent and active in both Syria and Iraq. The Syrian Civil War grinds on, and the conflict between the Turks and the Kurds has festered for decades. American forces are in a perilous place, but their presence not only helps maintain momentum in the fight against ISIS, it also deters further genocidal bloodshed in northern Syria. The United States should have an exit strategy, but one that neither squanders our tactical gains against ISIS nor exposes our allies to unacceptable retribution."

U.S. soldier in Syria: 'I am ashamed for the first time in my career'

"“Turkey is not doing what it agreed to. It’s horrible,” the soldier added. “We met every single security agreement. The Kurds met every single agreement [with the Turks]. There was no threat to the Turks — none — from this side of the border.”"

"Turkey launched an offensive against Kurdish groups Wednesday in northern Syria after President Trump announced that U.S. troops would withdraw from the area in anticipation of the operation, removing the chief deterrent to Ankara's offensive. Trump sparked a firestorm in Washington over the decision, saying he does not want to fight “endless wars.”"

"Turkey’s President Recep Tayyip Erdogan threatened Europe with a flood of refugees on Thursday if the continent’s leaders call the Turkish invasion of Syria an “occupation.” “We will open the gates and send 3.6 million refugees your way,” Erdogan said while speaking to officials from his ruling AK Party, according to Reuters."

"Ground fighting since 2014 against the extremist group was spearheaded by Kurdish forces that made up the bulk of the Syrian Democratic Forces, a U.S.-backed organization now tasked with governance of the area and containment of resurgent IS fighters and overcrowded IS prisons. In particular instances, when asked for help in the anti-IS fight, Turkey refused to help the Kurdish forces, which it sees as allies to dissident Kurds in his country."

"Residents of border areas within Syria scrambled in panic as they tried to escape on foot and in cars, pickup trucks and motorcycle rickshaws piled with mattresses and belongings, and the U.N. refugee agency said tens of thousands of people were on the move. It was wrenchingly familiar for many who only a few years ago had fled the militants of the Islamic State group."

"A Kurdish-led group and Syrian activists said that despite the bombardment, Turkish troops had not made much progress on several fronts they had opened. But their claims could not be independently verified, and the situation was difficult to assess."