DeGeneres defended her friendship with Bush Tuesday on "The Ellen DeGeneres Show", saying that kindness should help people overcome their differences.

From the Right
2916
Polarization
Ellen DeGeneres Refuses to Be Shamed for Watching Football with George W. Bush
Reason 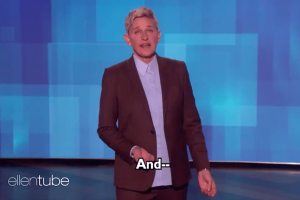 On Sunday, Ellen DeGeneres attended a Dallas Cowboys football game. It was noteworthy because of whom she was seated next to: former President George W. Bush. The pair could be seen in pictures and a video clip enjoying the afternoon together. (Their respective partners, Arrested Development actress Portia di Rossi and former First Lady Laura Bush, were there too.)

In 2019, everything must be political. And so the news that DeGeneres could make it through an entire football game seated next to the odiously conservative Bush and actually have a...

A slice of social media lost its collective mind over the weekend after a photo of Ellen DeGeneres at Sunday’s NFL game between the Packers and the Cowboys surfaced online.

The problem? The self-proclaimed “gay Hollywood liberal” was sitting next to former President George W. Bush.

Some Twitter users vehemently criticized her for sharing the Republican’s company, calling him a “war criminal.” But DeGeneres was not having it.

“Here’s the thing: I’m friends with George Bush,” she told her studio audience Monday at a taping for Tuesday’s “The Ellen DeGeneres... 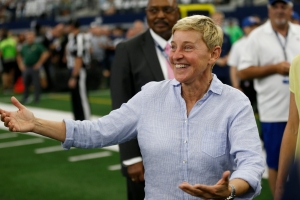 The unlikely duo had many fans throwing a flag on the play. "Ellen, this isn’t just a simple difference of opinion. George Bush, his administration, and his colleagues actively discriminated and worked against the LGBT community," one Twitter user wrote, while another added, "Really, really low standards there Ellen, and pretty pathetic."

DeGeneres made light of the situation on...

Hydroxychloroquine for COVID-19 prevention? How to separate science from partisanship
OPINION

A Rasmussen Reports survey of 1,000 American adults conducted in April found that 53 percent of Republicans were willing to take anti-malarial...

Could America split up?
OPINION

All week I've been haunted by a brief few seconds of video posted on Twitter late Sunday night by a student journalist in Eugene, Oregon. Two men face off at a...

Together, You Can Redeem the Soul of Our Nation
OPINION

While my time here has now come to an end, I want you to know that in the last days and hours of my life you inspired me. You filled me with hope about the...

Trump Is Determined to Split the Country in Two
OPINION

New offensives against major cities from President Donald Trump and GOP governors are pushing at the central geographic fault line between the Republican and...

A trial investigating the drug hydroxychloroquine as a preventative treatment against Covid-19 may never find out if it's effective, say scientists involved...

Republicans, Democrats agree on one thing: Doubt about fair election

(Reuters) - Americans across the political spectrum have widespread concerns that November’s U.S. election will be marred by fraud, interference or efforts to...

7 ideas to reduce political polarization. And save America from itself.
OPINION

Most Americans say social media companies have too much power, influence in politics

A majority of Americans think social media companies have too much power and influence in politics, and roughly half think major technology companies should be...

Americans have changed their behavior in ways that would have been unthinkable even a few months ago. Masks are an essential accessory. Social distancing is...

I’ve always said that our goals inform the paths we choose. You can tell a lot about a person — or, a political movement — by how they choose to persuade the...

To Curb Polarization, Everyone Must Accept a Possibility of Temporary Loss
ANALYSIS

Early in 2016, the political scientists Christopher H. Achen and Larry M. Bartels published Democracy for Realists. There they argue that American elections...