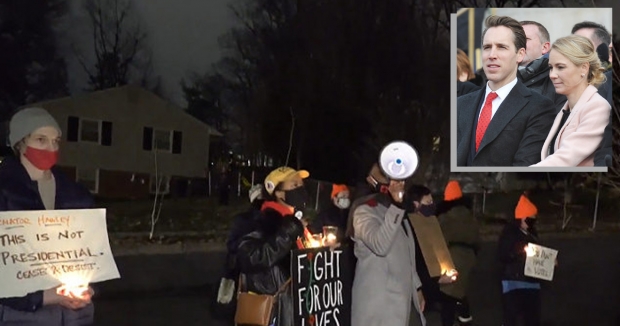 On Tuesday morning, Sen. Josh Hawley (R-MO) and The Daily Wire (Right bias) both accused the Washington Post (Lean Left bias) of media bias for its report on a protest that occurred Monday night outside Hawley’s home.

In addition to displaying media bias by omission and slant, the Washington Post illustrates that people increasingly have very different definitions of what the word "peaceful" means.

.@washingtonpost this morning printing outright lies from the Antifa group who now describe themselves as sweet angels. BS. You screamed through bullhorns, shouted down my wife when she asked you to leave, vandalized property, pounded on our door, and terrorized neighbors

The group that organized the event, Shutdown DC, called the event a "candlelight vigil" and Hawley a "snowflake" for his objections to their actions. Meanwhile, other groups, such as Reagan Battalion, called the event "an attempt to terrorize @HawleyMO’s family, his wife & kids, and neighbors."

The demonstrators said they went to Hawley’s home — where he has a newborn child — because the senator said he would object when Congress convenes Wednesday to certify the Electoral College vote; others have also vowed to join him.

Let’s break down the incident, how the Washington Post displayed media bias in its reporting on it, and how people increasingly differ on what "peaceful" really means.

The Incident: What We Know

Protesters posted a 50-minute livestream video of the incident, which you can view here. In the video, a group of about 15 protesters approach Hawley’s house at night. They begin yelling and chanting into megaphones; a woman and child appear at Hawley’s door. A visibly upset neighbor approaches the group. "Why are you disturbing our neighborhood and scaring our kids?" he asks. While protesters continue to chant and shout into a megaphone, four protesters approach Hawley’s front door. They appear to be holding lit candles. (The group claims they left a copy of the Constitution.) At one point, a protester says into the megaphone, "I don’t know if he’s going to come out tonight. Maybe if we come back tomorrow morning, early, he’ll come out. Maybe if we come back tomorrow night he’ll come out and talk to us. Maybe if we come back every morning he’ll come out and talk to us."

The St. Louis Post-Dispatch (an outlet not rated by AllSides) reported that a spokesman for the Town of Vienna Police Department said of the event, "people were peaceful." Protesters were reportedly cited for violating a Virginia code about picketing in front of a house, a town ordinance about making noise in front of a home, and a littering code.

In its piece, The Washington Post displays media bias by omission and slant: the reporter interviews Shutdown DC organizers at length, but not Hawley, his neighbors, nor the woman and child who appear at the front door. Slant is when reporters only tell part of a story. A balanced article would have included perspectives other than the organizers’.

How were the neighbors feeling about the incident and why? How did their children feel? What did they see and hear? These perspectives were not included by the Washington Post.

We Disagree Deeply on What "Peaceful" Means

Journalists and others often qualify a protest event as "peaceful" when no property was damaged and no one was physically hurt. Some say that as long as protesters are legally exercising their free speech and freedom of assembly rights, things were "peaceful."

Yet others note that while shouting, gathering, and leaving things at someone’s doorstep is technically non-violent, it’s not necessarily "peaceful," either. The whole point of protest is to be disruptive. There are very real reasons why people (including Hawley) would find Shutdown DC’s tactics intimidating and terrorizing. When protesters take action in spaces that society typically reserves as places for people to rest, recharge, enjoy family time, and recover from the day undisturbed — residential neighborhoods and private homes — it’s anything but "peaceful." And that’s kind of the point of a protest, anyway — to disturb the peace.

The Daily Wire said as much:

The protest may not have risen to the level of an Antifa riot, with Molotov cocktails thrown and windows broken, but given how often they have turned out that way, and the fact that Hawley was not home, but his wife and newborn were, The Post shouldn’t have tried to score political points by excusing the protesters’ behavior. They didn’t simply stand quietly outside Hawley’s home with candles, several used megaphones to shout at the home, argue with neighbors asking them to be quiet, and even went up to the Hawley’s front door. They may not have knocked on the door as they claim, but they did ring the doorbell. Those actions, late at night, could be considered frightening to a new mother, especially one who likely paid attention to the political riots this summer.

Take a look at some of the media coverage on this incident. Media outlets on the left and in the center emphasized the police and activists’ claim the event was "peaceful" in their headlines: 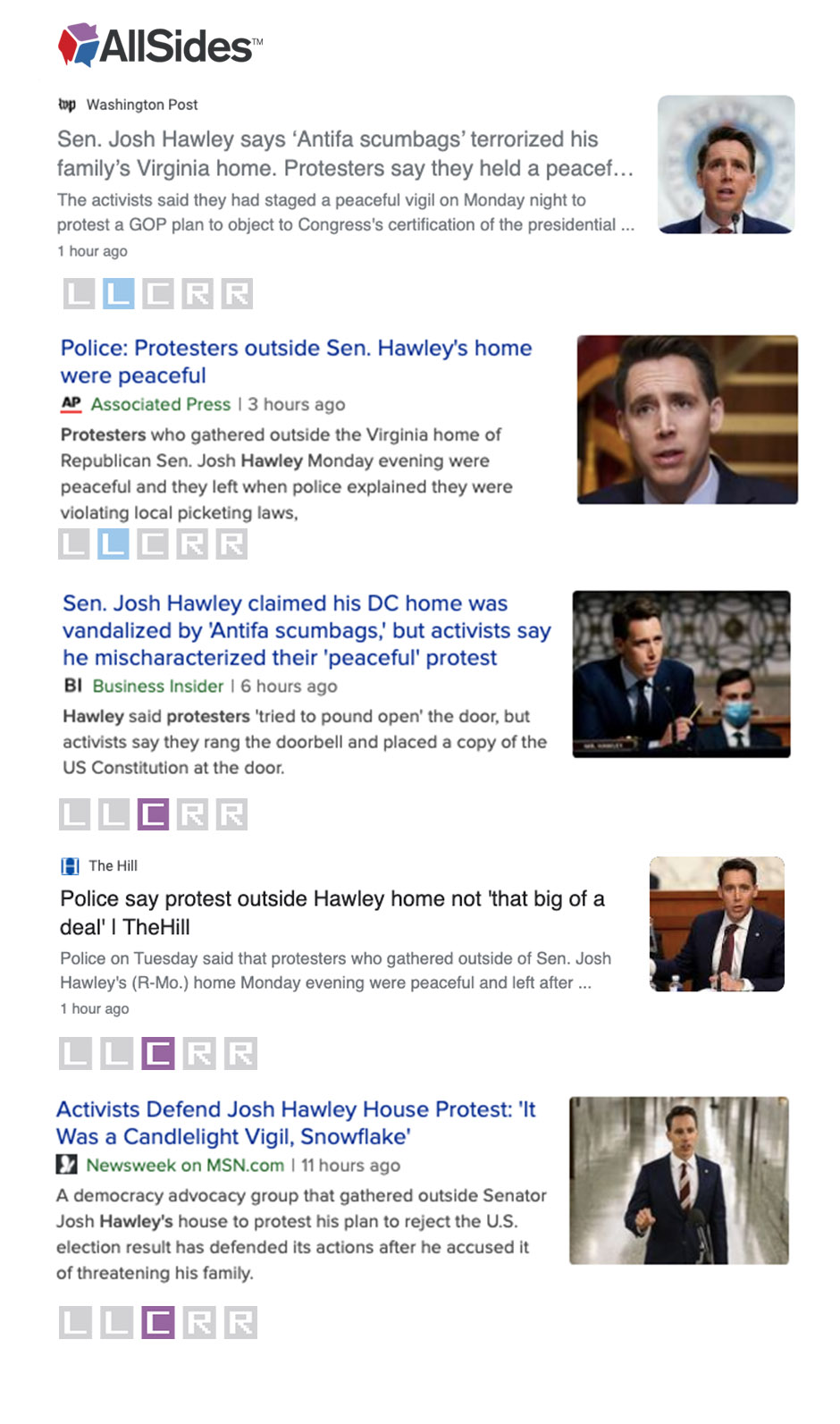 Meanwhile, other media outlets focused on Hawley’s claims of terrorization, or framed the story more neutrally by simply stating there was a protest outside the senator’s home and there were conflicting narratives: 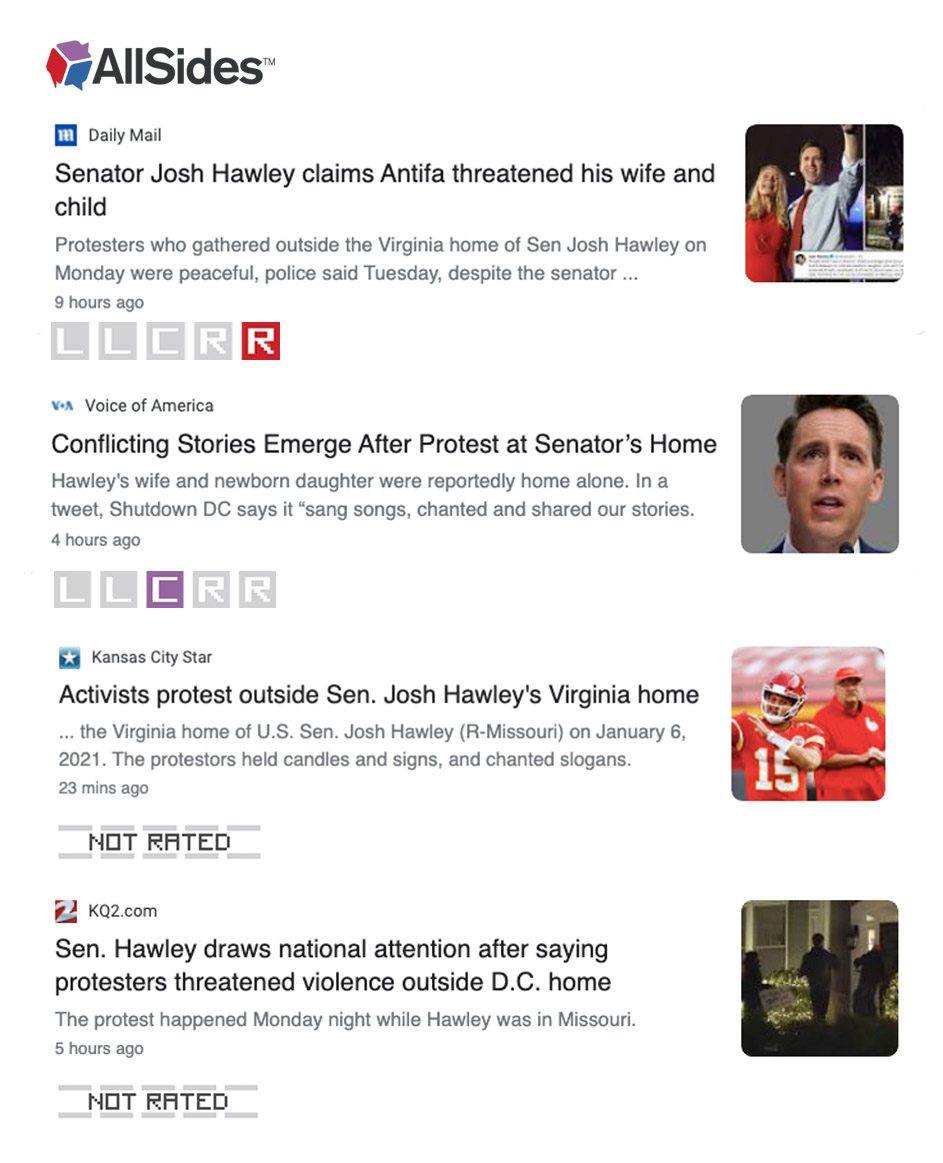 The Fight Over What’s "Peaceful"

The argument over whether or not this incident could be characterized as "peaceful" is just the latest in a long string of similar incidents we saw in 2020.

Over the summer, AllSides found media bias in coverage of protests in London, which BBC News (Center bias, though close to Lean Left) characterized as "largely peaceful." We found there was plenty of violence documented on video at the event.

There was also the incident in which St. Louis protesters marched to the mayor’s house, which led homeowners Patricia and Mark McCloskey to step outside their front door holding guns. Many left media outlets characterized the protesters as "peaceful," yet omitted the fact that they were trespassing on private property.

In the last nine months in the United States, we saw people target public figures’ homes numerous times for political purposes — vandalizing them, erecting guillotines outside them, or shooting fireworks into their apartment complex. Other people looted stores and vandalized police cruisers and monuments. Still others burned pig heads in the street. Hawley’s neighbors and wife are likely aware of this. Because a pattern of vandalization and arson has been established by some in the U.S. since this summer, many are understandably intimidated when protesters show up at their houses.

Protesters can be both not violent and not peaceful at the same time. The absence of overt violence or property damage does not mean an event was peaceful; it can still be disruptive and scary. When media outlets solely quote people who claim protests in residential neighborhoods are "peaceful" and fail to interview the targets or their neighbors, they’re committing the worst kind of media bias — misdirecting your attention and obscuring your view.

Media exists in part to hold bad behavior to account. Biased media often does a poor job of this in order to protect their side.