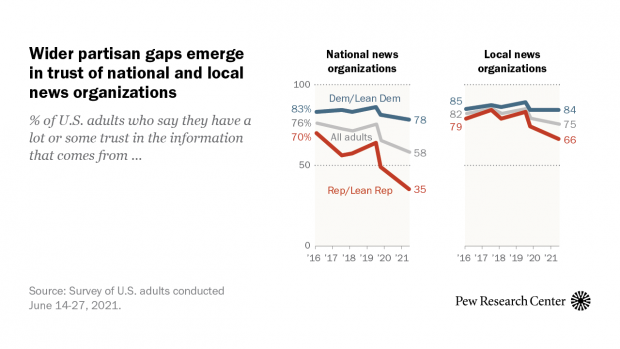 In just five years, the percentage of Republicans with at least some trust in national news organizations has been cut in half – dropping from 70% in 2016 to 35% this year. (Pew Research Center)

At AllSides, we often say filter bubbles — the digital chambers in which people only see info that confirms their priors — are one of the main issues standing between the polarized public and a more civil society. But does it go deeper than that?

AllSides CEO John Gable recently read and shared an article about this question with the rest of our team. The Aug. 24 article, published by Psychology Today (rated Center), is titled, “Are We All Living in A Bubble?” The subhead was ominous, saying: “No, the situation is actually much worse.”

Philosophy professor Bence Nanay, Ph.D. argues in the article that “social groups are divided by ‘inverting filters,’ which invert the truth value of information that comes through from other groups.” In simpler terms: “studies have shown that confronting members of a social group with information that contradicts their beliefs actually strengthens these beliefs.”

The AllSides team engages in constant open dialogue between diverse perspectives. Because our team contains people from across the political spectrum, this often leads us into deep conversation — sometimes frustrating, but always insightful. Nanay’s article prompted one of those talks.

The team’s conversation quickly shifted from filter bubbles to trust, and how to build trust between the AllSides audience and perspectives they (aka you) might be adverse to. Here is that chat (which occurred over Slack), edited for brevity:

I just read it, thanks John. So what's the solution here? How do we convince people not only to notice other perspectives, but to give them a fair shake?

I think Nanay makes a key distinction — that it's not that opposing information doesn't get in, it's that when it does, we reject it. (Sidenote, I'm not 100% convinced that opposing information always gets in. Some anecdotal examples: that blog on the Candace Owens tweet I published which showed Twitter showing us different information based on who we are; and during the BLM protests last summer, a lot of my left-wing friends had not seen the same videos I had seen online of violent rioting.)

Anyway, I read an article in a summer 2018 edition of Scientific American detailing a study that found that in order for people to change their beliefs, you actually have to ask them to make an argument for the other side. They have to construct it on their own and make a good faith attempt to say what the other side would say. What would a conservative say about X? What would a liberal say about X? Basically, getting inside the mind of the other side and doing this as an exercise.

I have experienced this first hand in my own life.  I used to be very left-wing and now I'm not. Part of the reason why is because in a previous job, I was a PR director for progressive petition campaigns. To be better in my role interacting with the press, I would challenge myself to answer questions that a conservative reporter might ask (or questions that someone who doesn't agree with the campaign might ask), and write down my responses.

By doing this exercise month after month, I actually changed my views on a lot of things. (of course, I never was actually asked these tough questions by reporters — when they called me, they all already agreed with me. This led to my realization that the media is largely biased, and here I am today.)

This makes me wonder if, instead of bridging events where we just get people talking to the other side, we do an event where we ask people to pretend they are on the opposite side and construct an argument of what the other side might say. A little more in depth and complicated, but this might be the way to actually get them to better understand one another.

I see this as ultimately boiling down to an issue of trust. Harvard Business Review published a good article on "Rethinking Trust" in their June 2009 issue. The author, Roderick M. Kramer, proposes seven rules for "tempering trust" -- how to be smarter about how and where we trust. I believe AllSides could eventually build tools to put some of those rules into practice. For example...

(Kramer’s Rule #1: Know Yourself) = AllSides could offer a self-assessment tool where each reader can take a survey to identify whether s/he trusts too much or is predisposed to be more skeptical.

(Kramer’s Rule #4: Send Strong Signals) = AllSides does this already via our bias ratings, but we could enhance that through some type of (potentially AI-enabled?) rating of the frequency of the various bias types we see appearing in a new sources' content.

(Kramer’s Rule #5: Recognize the Other Person's Dilemma) = AllSides already offers some version of Julie's idea.  Options could include role playing the other side when one participates in an AllSides Talks event and/or a series of AllSides blogs where our own staff takes the stance opposite their own when writing a blog --- and of course, we highlight that process in the feature.

(Kramer’s Rule #6: Look at Roles as Well as People) = This rule looks at the notion of institutional trust and trust in experts as a proxy for having to figure out if you trust an individual.  I wonder if an AllSides blog on whether & how this has shifted recently in American society might be valuable.

(Kramer’s Rule #7: Remain Vigilant) =  An AllSides blog, award, or maybe even a feature that celebrates instances where a source or individual changes his/her mind or says "You know, I was wrong about that.  You were right.  I hadn't thought of it that way before."

(Extra note from Stephanie: My initial inclination was that these types of internal discussions should remain internal.  My AllSides teammates — many younger than me and "native speakers" in the world of social media — have convinced me otherwise.)

For me, this brings me back to tribalism and "Us vs Them" dynamics. In more jargony terms, Affective Polarization. Humans have always had and will always have in-groups and out-groups. Having a good reputation within our In-Group often feels like a life or death situation. This makes sense, as historically being rejected by your community was effectively a death sentence. In some places it still is.

This means that if the tribe we identify with thinks one thing, it feels quite literally dangerous to believe a different thing. If we disagree with the groupthink, we do so quietly or risk consequences. This is deeply ingrained in us, and AllSides is not going to be able to overcome this by simply presenting alternate viewpoints.

That said, I don't think trying to overcome it is the right approach. Trying to get humans past “Us vs Them” thinking is a losing battle, but it's much more feasible to reframe who the "Us" is.

For example if the "Us" is "People who don't like being manipulated by media bias," then the "Them" becomes "mainstream media" or, with a more nuanced take, "the funding structure in which media outlets rely on clickbait and division in order to survive."

But if the "Us" is "Problem-solving voters who want effective policy regardless of party," then the "Them" becomes "Politicians who use divisive rhetoric instead of working together to find solutions." In both cases the Left / Right identity becomes less salient.

These identities still require an enemy, but I think we will make more progress as a movement if we intentionally select an enemy rather than pretend we don't have any.

Right now I fear that much of our audience sees the "Enemy" as "Mainstream media". This may be useful short-term for funding and traffic, as it's an easy villain to rally against. But I think it will work against us in the long run as it too easily plays into the narrative that nothing can be trusted, there can be no shared objective truth, and so forth. That way lies conspiracy theories and a total breakdown of societal trust. Free society cannot function in that environment.

Holding media accountable and encouraging transparency is absolutely necessary, but framing them as the villain is something else entirely.

Stephanie, I see value in every idea you offered, particularly the idea for a blog series from AllSides where staff members write from a POV they disagree with.

Samantha, you made excellent points. I agree that focusing more on the "us" against divisive/unproductive politics vs just against mainstream media is probably the right move for long-term solutions. I think I'll look for more opportunities to focus our news content on instances of political hypocrisy, inconsistency or unnecessary divisiveness from both sides on a single issue, with the goal of showing people that this is an issue no matter who you vote for.

As far as the idea that pointing out bad media as the "Enemy" plays into the narrative that nothing can be trusted, I have a few thoughts there.

Many media institutions have lost credibility for a number of good reasons, and one of those reasons is because they are clearly biased, playing partisan politics, and have largely abandoned journalistic principles of objectivity, fairness, etc. The success of AllSides shows that people do not actually want this, they truly want all sides, a fair shake at all angles — not advocacy journalism.

My suggestion about how to deal with the “anti-media” concern. Let’s avoid stereotypes.

We should point out that there is a lot of media (on both sides) that have not only slid away from objectivity but in many cases proactively reject it to advance their own objectives. That is not trustworthy and a problem we see in the news media today. But not all news media has done this.

If instead we just attack “mainstream media”, that is a stereotype. The Wall Street Journal is a mainstream media source that still upholds the best journalistic principles.

Let’s criticize more explicitly and exactly, not in generic stereotypes. Besides, thinking and talking in stereotypes seems to promote the very one-sided, non-nuanced, tribal thinking we want to avoid.

Have feedback or thoughts on this discussion? Email us!

This conversation was edited for brevity by Managing Editor Henry A. Brechter (Center bias).