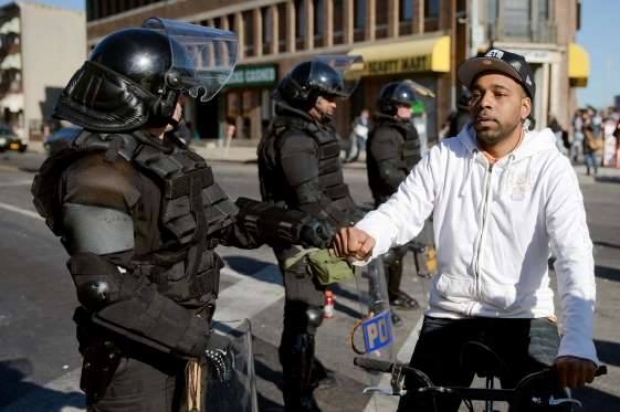 The issue of police brutality doesn’t have to be a subject that divides us.

As discussed in parts I, II and III of this four-part series, we don’t have to choose between supporting police officers and defending abused minorities. Not only is it possible to talk about police brutality without picking sides, it’s absolutely essential.

Evidence shows that, while the majority of police officers perform their job justly and conscientiously, police brutality is widespread and racial minorities bear the brunt of the abuse. But while race is certainly relevant, getting bogged down by particular statistics and arguing over who’s more to blame tends to distract us from our ultimate goal: finding solutions.

In order to seek resolutions, both sides must acknowledge factors that contribute to the rise of mistreatment by police:

These issues have been fueled, in part by:

These issues have compounded and reached the boiling point. How do we bridge the chasm between law enforcement and the public, particularly in the minority community?

Listening to one another is the first step towards regaining trust. Here are some steps in the right direction.

As Newsweek has described, “America has been quietly arming its police for battle.” Back in 1990, faced with a bloated military and what was perceived as a worsening drug crisis, the National Defense Authorization Act permitted the Department of Defense to transfer arms, ammunition and armored vehicles to police. Specifics on these procurements are not matters of public record.

An ACLU report found that, “policing has become unnecessarily and dangerously militarized, in large part through federal programs that have armed state and local law enforcement agencies with the weapons and tactics of war, with almost no public discussion or oversight…Analysis shows that the militarization of American policing is evident in the training that police officers receive, which encourages them to adopt a “warrior” mentality and think of the people they are supposed to serve as enemies.” For example, police units “are forcing their way into people’s homes in the middle of the night, often deploying explosive devices…simply to serve a search warrant on the suspicion that someone may be in possession of a small amount of drugs.”

In June 2014, Rep. Alan Grayson (D-Fla.) introduced an amendment to the NDAA to prohibit the Department of Defense from gifting excess equipment, such as drones, armored vehicles, grenade launchers, silencers, and bombs to local police departments. As Grayson said to the House of Representatives before the vote, “Those weapons have no place in our streets, regardless of who may be deploying them.”

As the ACLU says, “neighborhoods are not war zones, and our police officers should not be treating us like wartime enemies.” Policy must change at both the federal and local level for the police to win the trust of the public.

The problem of discord between the police and the public has finally reached the attention of the federal government.

In July of 2016 Congress created a bipartisan group to examine the issue. "It's clear that more must be done to end excessive use of force, strengthen police accountability, prevent violent attacks on law enforcement and improve the relationship between police officers and the communities they are sworn to protect and serve, "says joint leaders Bob Goodlatte (R-Va.) and John Conyers (D-Mich.)

In a formal statement they write, “It seems as though there are two factions forming: one pro-police and one pro-racial justice. As Members of Congress, we strongly reject this notion of division… Just days before his murder, Montrell Jackson, an African-American  police officer, summed up these issues  in a Facebook post: ‘In uniform I get nasty hateful looks and out of uniform some consider me a threat…These are trying times.’ The group promises to “candidly discuss the issues fueling the current state of distrust between some of the public and law enforcement.”

However, most of the meaningful work can’t be done at the federal level.

For example, when the Department of Justice sued the Los Angeles Police Department for pervasive misconduct in 2000, the LAPD was forced to adhere to reforms under supervision of federal courts. As a Harvard University study concluded, the effect of the federal oversight was to “erode morale… sapping the confidence and spirit that effective policing requires.” This initially led to an even higher crime rate, until Los Angeles hired new police chief William Bratton. Bratton brought in a policing regime that “discouraged the use of force even as it ramped up enforcement.” Over the next decade, not only did crime decline, but officer morale rose. Force incidents declined by almost 30%, fewer than at any point in the previous decade. Public satisfaction rose, with 83% of Los Angeles residents saying that the police did a good or excellent job.

When police departments can prove that it’s possible to reduce crime, increase police morale and lower the incidence of police brutality— all at the same time—the public has more reason to put their faith in the system.

More accountability for police who engage in brutality

As the Libertarian party states, there can be no peace without justice.

When witnesses are unwilling to cooperate with police, criminals evade justice. When police are not charged with crimes for brutality, it’s officers who evade justice.

The police have a duty to protect themselves and those around them, and are sometimes required to do so without the support of the community. But no matter what the circumstances, every time a police officer kills they are effectively playing judge and jury. We all have the right to be presumed innocent until proven guilty in a court of law.

Policemen are often able to hide behind the doctrine of qualified immunity to avoid being charged for brutality. According to the FBI, “this shield of immunity is…designed to protect all but the plainly incompetent or those who knowingly violate the law.” When suits are successfully brought against officers, police departments generally pay out settlements, but the officers themselves receive no punishment.

As an article in The Nation describes, indictments of policemen are nearly impossible. The Supreme Court has ruled that a police officer can use deadly force only if he “has probable cause to believe that the suspect poses a significant threat of death or serious physical injury to the officer or others.” But courts generally prohibit second-guessing of the officer’s decision, and wide latitude is granted to the officer’s account of the situation, even if evidence proves it to be mistaken.

The White House has advocated the use of dash cams and body cameras to document police behavior. But this has little usefulness if police continue to be immune from repercussions.

Police need protection from being charged for reasonable engagement in the line of duty. But in order for the public to trust the system, officers who engage in misconduct or unjustified force must be prosecuted in the same manner as any citizen who commits a violent crime.

Studies show that police officers are more likely to erroneously assume that a black suspect is armed, and more likely to use force on blacks. However, even while confronting racism, it must be acknowledged that blacks are six times more likely to commit murder, and much more likely to commit any type of violent crime than non-blacks. Regardless of the reasons for these statistics, it makes sense that fear, suspicion and overreaction are natural byproducts.

The best way to rid police of the “black male fear factor” is to help officers and communities get to know one another, says Constance Rice, civil rights attorney and founder of the Advancement Project.

Police relations consultant Dr. Ellen Scrivner says such things as body cameras and enhanced training help, but she believes the real answer is building trust where there is none – which takes hard work on both sides.

Community outreach programs such as Hero911 seek to build relationships between police and the public through school events and local meetings. The goal of these organizations is to build trust within the community, motivate citizens to report crime and foster understanding.

Basketball superstar Michael Jordan, who lost his father to murder, contributed $1 million to both the Institute for Community-Police Relations and the NAACP Legal Defense Fund “in the hope that we can come together as Americans through peaceful dialogue and education.” Jordan says, “we need to find solutions that ensure people of color receive fair and equal treatment AND that police officers – who put their lives on the line every day to protect us all – are respected and supported.”

On one hand, it’s important for the community to understand that the job of a police officer is fraught with danger and sometimes involve terrifying situations that must be dealt with in a blink of an eye. For example, resisting arrest greatly increases one’s chances of being engaged in police violence. However, as a Mother Jones article points out, some blacks run from police or resist arrest not because they’re guilty, but because they fear prejudice at the hands of the law enforcement system. Each side needs to understand the other’s fears before they can work together.

Acknowledge the failures of the wars on drugs and poverty

Despite billions of dollars, the government’s 50 year War on Poverty and War on Drugs have been abysmal failures, leading to severe repercussions that were not anticipated.

Aggressive enforcement of the War on Drugs has lost its public mandate, says the ACLU, as 67% of Americans think the government should focus more on treatment than on policing and prosecuting drug users. They believe the use of hyper-aggressive tools and tactics in the war on drugs “results in tragedy for civilians and police officers, escalates the risk of needless violence, destroys property, and undermines individual liberties.”

There’s no question that the underground drug culture and financial deprivation that plague minority communities create hotbeds of crime. The unintended consequence of the war on drugs has been a thriving black market of illegal substances and violent gang warfare to protect the dominion of dealers.  When the most successful men in a community are gang leaders and drug lords, it makes sense that young boys aspire to follow in their footsteps.

If progressives and conservatives alike can acknowledge that these long-term policies have not worked, we have the best chance to find new, more successful alternatives.

Bias is the enemy of logical introspection. It leads us to dig in our heels when discussing an issue instead of considering all points of view.

It’s impossible to avoid encountering biased stories in the mainstream and social media. But because these sources tend to mold our opinions, it’s important that we recognize their bias.  For example, the Democratic Party displayed bias when they invited the mothers of police violence victims to their national convention, but didn’t extend a similar invitation to the mothers of police officers slain in the line of duty. And the media creates bias when violent protests get the lion’s share of media attention though, as the Libertarian party points out, “the vast majority of black communities have been exercising their right to protest peacefully and admirably.”