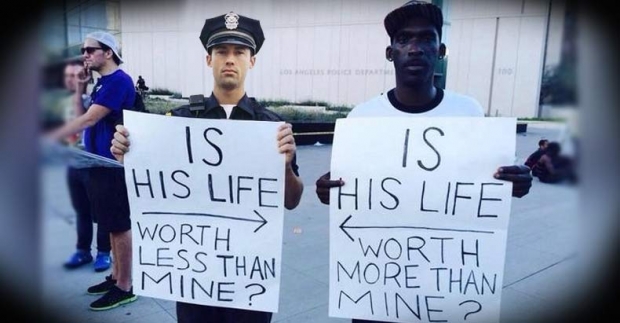 Lately the media has seemed inundated with reports of alleged police brutality. Now, the recent murders of policemen in Dallas and Baton Rouge add another wrinkle to this grave issue. Demonstrations against police racism vie against rallies to support slain officers.

As with many contentious topics, the issues of police brutality and racism have people drawing sides. A typical argument about police bias might go as follows:

“Police racism causes blacks, both the innocent and guilty, to be treated unfairly and with aggression.”

“Blacks are targeted by police because they commit more violent crimes.”

“Police work hard for the community. They put their lives at risk to arrest dangerous offenders.”

“Some communities don’t trust the police. They feel reason to fear the cops more than the criminals.”

“Many communities make policing harder by not cooperating with officers.”

Which of these resonate with you?

In fact, all of these statements have value. Acknowledging each doesn’t diminish any of the others.  In fact, finding a resolution to this issue is impossible without accepting multiple truths.

This three-part series, which expands upon my Christian Science Monitor article published earlier this week, will investigate the truth and the bias of each side of these arguments.

We need to be cognizant that the information we get – whether from experts, online searches, our friends, or the media – often comes with bias.

Even with the best intentions, bias can impact the way we see things. Studies show that people are willing to disregard problematic facts that challenge their political ideology. Bias may influence how a reporter covers the news. Even in science, evidence that doesn’t fit our conclusion is sometimes ignored.

But one-sided analysis doesn’t lead us to the truth. We must remain open-minded to truly see the whole picture.

Are police racist, or do they simply target the most likely violent offenders?

According to the FBI, African Americans perpetrated almost 40% of violent crimes in 2013 (the most recent data available) though they are just 13%of the population.

As Heather MacDonald points out in the Wall Street Journal, “A concentration of criminal violence in minority communities means that officers will be disproportionately confronting armed and often resisting suspects in those communities, raising officers’ own risk of using lethal force.”

What’s the most appropriate way to interpret the facts? Depends who you ask

The hunt for objective statistics on police bias is a dizzying task. Depending on the source of information and the way it’s interpreted, it’s possible to confirm just about any premise one seeks to find.

For example, white people make up roughly 62% of the U.S. population. They are about 49% of those killed by police officers. African Americans account for 13% of the population and are 24% of those fatally shot and killed by the police.

Using this exact same data, two media sources made two seemingly opposing points. An article in the left-leaning Washington Post concluded that “black Americans are 2.5 times as likely as white Americans to be shot and killed by police officers.” A story on the conservative Wire website emphasized that “cops killed nearly twice as many whites as blacks in 2015.”

Justin Nix, an assistant professor of criminology at the University of Louisville, says research suggests police exhibit “shooter bias,” perceiving blacks to be a greater threat than non-blacks. Research subjects were found to be more likely to misinterpret a weapon if they were first shown a picture of a black face. ”We’re taking in so much information,” Nix explained, “we use mental short cuts to try to make sense of the world around us.”

Is this bias justified? It depends how you interpret the data. Between 2004 and 2013, U.S. police officers were killed by 289 white and 242 black assailants. In sheer numbers, more policemen were killed by whites. But proportional to their percentage of the population, blacks murder cops much more frequently.

It’s important to note that bias against blacks isn’t just restricted to white officers. A March 2015 Justice Department report on the Philadelphia Police found that black and Hispanic officers were much more likely than white officers to shoot blacks based on the misperception that they were armed.

Besides shooting deaths, biashas been evident in other ways. A recent study by Harvard economist Roland Fryer, Jr. analyzed police interactions with blacks, whites and Hispanics in ten cities. Fryer found that "blacks and Hispanics are more than fifty percent more likely to experience some form of force, such as being grabbed, pushed into a wall or onto the ground, or handcuffed, with police than whites."

North Carolina was the first U.S. state to mandate police-stop data collection in 2002. Based on a University of North Carolina study analyzing over 18 million traffic stops, the disparity between blacks and whites has risen over time.  In 2002, black men were 70% more likely to be searched than white men. By 2013, this difference was over 140%. (Interestingly, black women and white women were about equally likely to be searched, cited, or arrested during traffic stops.)

Citing “probable cause” (i.e. “reasonably reliable information to suspect there is a fair probability that a person has committed a crime, or that a search will reveal contraband or evidence”), North Carolina officers were 250% more likely to search black men than white men in 2013, despite that police were consistently more likely to find contraband with white males than with black males.

Factors lead to fear and suspicion

Facts show that blacks perpetrate violent crime, including the murder of police officers, at a much higher rate than whites. These statistics are often downplayed by progressive organizations and news sources. Data also supports that racial bias exists in the police force, both subconsciously and consciously. The conservative media tends to omit this evidence in discussion about police brutality.

Fear and suspicion has resulted in paranoia on both sides.

"We can conclude that blacks in North Carolina appear to have good reasons to be mistrustful of the police, and that these trends appear to be growing over time," concludes North Carolina researchers.

The National Institute of Justice has reached the same conclusion. They add, “Researchers have been working to figure out how much [racial] disparity is because of discrimination and how much is due to other factors, but untangling these other factors is challenging.”

When we are willing to reassess our assumptions and approach these issues with frank discussion, the more likely we are to work together towards the best resolution.