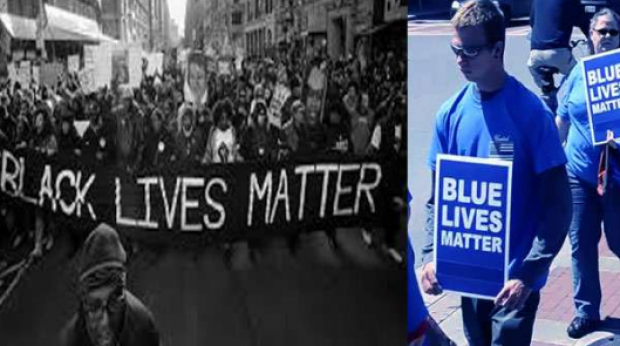 As discussed in Part I and Part II of this series, police brutality and racism have people drawing sides. Often the sources from which we choose to gather information, whether it’s the media or our community, comes with a bias that prevents us from seeing the big picture. Many of us tend to focus on one aspect of the problem without considering, or sometimes even being aware of, opposing points.

Opinions on police are strongly divided along partisan and color lines. According to a Reuters poll, 53% of Democrats but only 19% of Republicans believe the police target minorities unfairly.  According to the National Institute of Justice, research shows “that race is a consistent predictor of attitudes toward the police.” Sixty-nine percent of African-Americans and 54% of Latinos believe police officers treatment of minorities is unfair. But just 29% of whites agree.

A typical argument about police bias might go as follows:

“Minority communities are unappreciative of police, and often make officers’ jobs harder by being uncooperative.”

“Many minority communities feel they have good reason not to trust the police. Some fear cops as much as criminals.”

Each side has valid reasons for their grievances. Partisan organizations often try to pin blame, but Dr. Ellen Scrivner, an executive fellow for the Police Foundation and a former Justice Department official, believes the problems between police and the public are mutual. “People don’t trust the police, and the police don’t trust the people.” Suspicion on both sides leads to a dysfunctional relationship between law enforcement and the communities they serve. This distrust often thwarts justice being served, which hurts us all.

Confidence in police is at its lowest in 22 years, according to Gallup. As stated earlier in this series, poor, urban communities, where innocent people are most vulnerable to crime, are in vital need of a police force they can trust. But these communities are the least likely to have faith in police.

On the other hand, police officers often feel their difficult job is undervalued. “I’m not sure most people fully understand what police encounter on a day to day basis,” says Scrivner, noting the danger officers regularly face. While there has been much uproar about the homicides of civilians by police, the Washington Post found that 90% of those shot and killed by policemen in 2015 and 2016 were armed with a weapon and attempting to attack the officer or someone else.

What has created so much animosity between the people and the police?

Understanding the underlying causes for distrust on both sides is the best route towards bringing us together towards solutions.

Supporters of police often complain that officers can’t adequately do their job due to uncooperative communities. For example, in Baltimore, the rate at which police solved homicide cases plummeted to about 30% in 2015. Police identified hundreds of shooting suspects but say they were unable to pin charges on most without the assistance of victims and witnesses. “People are literally getting away with murder," says the State of Maryland's Attorney Marilyn J. Mosby.

More than 90% of these homicide victims were black. Many victims were gunned down in broad daylight. Some were innocent bystanders struck indiscriminately. Nearly two dozen were children, many of them toddlers.

Why wouldn’t people help police catch perpetrators of these crimes?

Mosby calls Baltimore the "home of witness intimidation." She says residents are too scared of repercussions by gang members of to assist police in tackling crime.

Witnesses of crime, trying to protect themselves and their loved ones, behave in the way that seems most safe. But the result is that the police are unable to adequately do their job through no fault of their own.  And when killers remain on the street, the public sees this as a sign of police ineffectiveness.  This gives witnesses yet another reason not to put their neck out and cooperate with investigations. Meanwhile the police lose trust in the community they’re trying to serve.

The militarization of police leads to fear of law enforcement

In many communities, the days of the kindly neighborhood police officer are gone. What happened? According to Radley Balko, author of The Rise of Warrior Cop, America’s relentless declarations of “war” against vague enemies such as crime, drugs, and terror have fueled a military kind of mentality among police.

Balko contends that the distinction between cop and soldier has blurred. He says that in the past few decades a “creeping battlefield mentality has isolated and alienated American police officers.” Instead of serving the community, the community becomes an enemy of war. Our cops now get military training and use equipment designed for war. SWAT teams are vastly overused, particularly in low-income black communities where the drug trade is widespread.

Unlike the issue of police racism, views on police militarization are not strikingly divided along color or partisan lines. For years, polls show that the majority of Americans believe the use of military weapons by local police departments has gone too far. Most blacks, Hispanics and whites agree: the trend is disturbing.

Left-leaning Mother Jones points out that outfitting America's cops has become big business fueled by the federal government. The Department of Defense has given $5.1 billion worth of equipment to state and local police departments since 1997, with things like grenade launchers and armored personnel carriers. Since 2002, Homeland Security has handed out grants for military equipment worth $41 billion. This money is supposedly earmarked for counterterrorism, but the DHS specifies that the equipment can be used for any law-enforcement purpose, from shutting down protests to serving warrants and executing home searches.

The right-leaning Cato organization says that state and local police departments are encouraged by the federal government to “increasingly accept the military as a model for their behavior and outlook.” Cato believes “confusing the police function with the military function can lead to dangerous and unintended consequences.”

The left-leaning ACLU estimates there are 45,000 SWAT raids every year. That’s 124 forced police break-ins every single day. They found that found that almost 80% of SWAT raids are to search homes, usually for drugs, disproportionately in communities of color.

As the right-leaning Foundation for Economic Education explains, SWAT teams were originally developed to handle rare and violent events, such as bank heists and hostage situations. But now they’re increasingly deployed to handle non-violent and routine law enforcement functions such as serving warrants. FEE says this results in the very opposite of what SWAT teams were originally meant to do: they actually create volatile and dangerous conditions instead of diffusing them.

When police are trained to think and act like soldiers fighting a war, is it surprising that many people are frightened of them?

Police militarization, and the police brutality it leads to, are problems that progressives and conservatives alike would like to see fixed. But while candidates haggle over the polarizing details of police issues, there is nary a word from politicians on either side about such solutions as reining in the military build-up of local police forces.

Though it’s most pronounced in poor, urban communities, the fear and lack of trust between the people and the police is a problem that concern us all.

In my final installment: remedies.