Inflation remains high despite falling prices of key goods, and rising housing costs are a main reason why.

Annual inflation eased to 8.3% in August from 8.5% in July, according to the Labor Department. But while prices of gasoline and used cars fell and rising food costs slowed slightly, the cost of shelter continued to rise. Housing costs, including rents and home prices, rose 0.7% in August from the previous month and 6.2% from a year before. Housing costs also make up for a growing share of the overall inflation rate: 25% of August’s rate, up from roughly 20% in February. And while rents and mortgage rates remain high, homebuilder sentiment, construction and home purchases remain low. Thirty-year mortgage rates passed 6% for the first time since 2008 last week, and building permit applications in August fell 10% from July and 14.4% from last year.

Sources across the spectrum cover ongoing housing market issues and how they connect to high inflation. Reports from left to right highlighted how rising housing costs made up a significant part of August's inflation report. Some voices, such as the writers of one Insider article, focused on how it "seems unlikely that Congress will step in anytime soon to provide housing relief for Americans." Coverage from right-rated sources often focused more on comparing current costs with prior years to illustrate inflation's intensity, and on voices who label the current housing crisis a market recession. 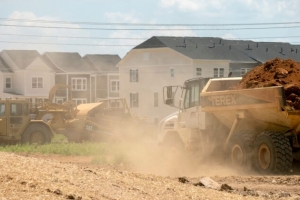 Homebuilder pessimism has deepened as confidence in the U.S. housing market continues its downward spiral amid skyrocketing mortgage rates and inflation.

Home construction businesses blame rising rates for the decline in sentiment, by making housing less affordable for first-time buyers at a time when single-family home prices are at an all-time high.

Supply shortages and rising costs for building materials have led also led to the increase in housing prices by increasing construction costs.

Builder sentiment fell for the ninth consecutive month this September, by 3 points to 46, according to the...

Last year, Americans could buy a house or rent relatively cheaply due to rock-bottom interest rates and pandemic-era deals meant to fill empty apartments. But that was only a brief reprieve from a housing market crisis brewing in the US for decades.

Soaring housing and rent prices made up a large portion of the increases in the latest inflation report released on Tuesday. Data from the Bureau of Labor Statistics shows that housing costs increased 0.7% in August after rising 0.5% the month prior. Americans are now paying 6.2% more for shelter than they...

Rents and other shelter costs are emerging as a major driver of overall consumer inflation, keeping it high at a time when many other sources are starting to ease.

Economists expect housing inflation to strengthen further before cooling off in the coming months, but are unsure of when relief will appear. This creates another challenge for the Federal Reserve as it raises interest rates to reduce price pressures.

Overall annual inflation eased to 8.3% in August from 8.5% in July, according to the Labor Department’s consumer-price index. That reflected declines from the month before in prices for items such...

News and Information about Housing and Homelessness
Go ad-free! Support AllSides.
About these ads
AllSides partners with Citizen Connect to help people connect across divides.