On his inaugural trip to Asia as President, U.S. President Joe Biden visted a Samsung semiconductor manufacturing plant in South Korea that is considered a model for a new $17 billion factory that Samsung plans to build in Taylor, Texas.  During the course of the five day trip, Biden will be conveying a message of diplomatic and economic commitment with an eye on China and Russia's war on Ukraine.

Samsung employs more than 20,000 Americans in Texas and California. Newly inaugurated South Korean President Yoon Suk Yeol said that semiconductor chips produced by Samsung will be essential for artificial intelligence and self-driving vehicles and are essential for any country's compettiveness.  He also urged Biden to provide incentives for U.S. and South Korean businesses to invest in each other's countries.

Meanwhile, Biden is calling for passage of a bill in Congress meant to boost U.S. competitiveness against China. House and Senate negotiators are working to finalize this bill, which the Biden administration hopes will ultimately strengthen supply chains, lower costs to consumers, and boost competitiveness against Chilna.  The bill, which was approved by the House in February, would funnel significant funds into U.S. research and development projects. 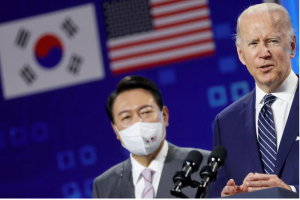 President Biden touched down in South Korea on Friday in the first visit to Asia of his presidency, kicking off a five-day tour designed to underscore his administration’s diplomatic and economic commitment to the region in the face of a rising China.

Biden’s first remarks here nodded to a top domestic priority for the administration, calling for passage of a sweeping bill in Congress meant to boost U.S. competitiveness against China that House and Senate negotiators are scrambling to finalize. 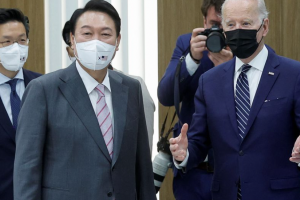 Joe Biden's first stop on his inaugural trip to Asia as U.S. president on Friday was a massive Samsung Electronics (005930.KS) semiconductor plant, underscoring a message of economic security with an eye on China and the war in Ukraine.

Biden landed at the U.S. military's Osan Air Base in Pyeongtaek, south of Seoul, and immediately drove to Samsung's nearby factory, the largest semiconductor plant in the world. There he greeted South Korean President Yoon Suk-yeol, a relative newcomer to politics, for the first time in person. read more

Advanced chips for functions such... 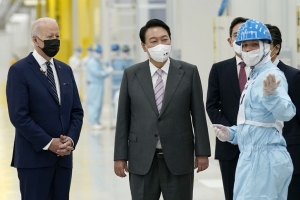 President Biden pledged Friday to bring the U.S.-South Korea relationship to “greater heights” as he kicked off an East Asia swing at a semiconductor manufacturer owned by Samsung, a company investing billions in the U.S.

Mr. Biden said Samsung’s construction of a new plant in Texas is emblematic of a technology alliance that will help both countries remain competitive in an ever-changing world. He also said it will help their nations become less reliant on countries that “don’t share our values.”

“These little chips, only a few nanometers thick, are the key to propelling us into humanity’s technological development,” Mr. Biden said after...