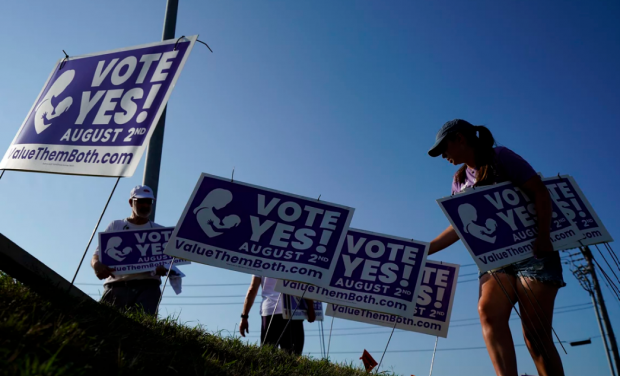 The biggest contest in this year’s midterm elections is not between Joe Biden and Donald Trump, or between either man and their growing number of detractors within their respective parties. It’s not a faceoff between Nancy Pelosi and Kevin McCarthy or between Mitch McConnell and Chuck Schumer. Rather, the most important political battle this fall will be between inflation and abortion.

Earlier this year, it didn’t appear likely that the Democrats could find an issue sufficiently compelling to compete with the angst that voters were feeling about rapidly rising prices for food, gas and housing. But then the U.S. Supreme Court stepped in, and their decision to overturn Roe vs Wade and effectively eliminate federal protection for abortions presented a potential opportunity for pro-choice Democrats to redirect the public’s attention.

And so the battle was joined. For the past two months, the two parties have traded confident predictions that their preferred issues will drive voters’ decisions on Election Day. While it’s clear that reproductive rights have become a much more relevant issue to many Americans since the Court’s decision, it has seemed like the GOP”s focus on inflation would be the more potent political force of the two.

Then came Kansas. Last week, voters of the Jayhawk state went to the polls to decide on an anti-abortion statewide ballot measure. The referendum was defeated by an overwhelming margin, fueled by massive voter turnout not only in more centrist suburbs but in the state’s deeply conservative rural areas. Now both national parties are scrambling to interpret the unexpected results and to determine how a post-Roe electorate will vote in November.

The importance of abortion rights as a motivator for voting has increased significantly in the months since Justice Samuel Alito’s preliminary draft opinion leaked. Even more encouraging to Democrats is the growing saliency of the issue not only among their own party’s base but among independent voters as well. So the results from Kansas have left party activists giddy with excitement and anticipation that they have found the silver bullet that will allow them to maintain their congressional majorities.

But that’s a deceptively simple solution to a much more complex political challenge. Unlike the Kansas vote, which was a straight up-or-down decision on the legality of abortion, candidate elections involve several moving parts and individual policy options, each of which the voters must weigh as they cast their ballots. Pro-life Republicans won’t be required to run their campaigns on the basis of their opposition to abortion. They can and will instead highlight their positions on not only inflation and economic policy, but immigration, crime and other issues where swing voters find the Democrats wanting.

The inflation argument is still especially potent. Gasoline prices have been dropping for several weeks, but prices for food, housing and other necessities are still extremely high. Even in the face of encouraging economic data, consumer confidence continues to drop. Rising concerns about public safety and ongoing problems at the U.S.-Mexico border all but guarantee that Republican candidates will continue to pound on these issues throughout the fall campaign.

Which means that the lopsided Kansas results will not automatically translate into similar wins for Democratic House and Senate candidates. But it does appear that because voters are prioritizing abortion rights to a greater degree since the Court’s decision, Democrats have an opportunity to use the issue to turn out what would otherwise be an extremely demotivated Democratic base. Progressives have never been all that enthusiastic about Joe Biden, and even Congress’ recent progress on climate change legislation doesn’t erase their disappointment of the lack of action on voting rights, criminal justice reform, immigration and their other priorities. But abortion rights might.

The generic congressional ballot now shows that Democrats have pulled even or slightly ahead, and uneven performances by several Republican Senate candidates makes the GOP’s ability to win back that chamber less certain. Abortion doesn’t solve all of the Democrats’ problems, but it creates a pathway to success that was much harder to see just a few weeks ago.