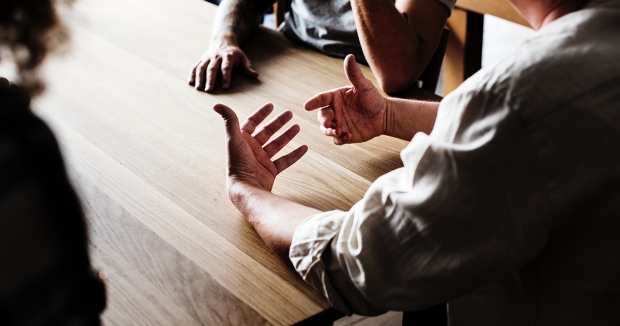 Suppose you are talking to another person who has very different political viewpoints. Everything seems to be going fine. Then, you say a word or phrase that unintentionally alienates the other person. Suddenly, the conversation feels derailed. What may have been pleasant can quickly become tense.

How can we avoid stepping on verbal landmines? And on the flip side, how can we use words with purpose to better reach out to those with different political views?

The following list, an excerpt from a longer booklet, builds on the AllSides Red Blue Dictionary. It lists many terms, words and phrases that one should be cautious with around political opposites, as well as words or approaches that could work better.

The list below provides substantial guidance for conservatives talking to liberals. It includes an overview of terms that can be problematic and those that are usually acceptable.

The list below is long, but actually misses a key element to civil discourse: sharing personal stories about why these topics are important. Personal stories, much more than facts, build comprehension and connection, and the bond can facilitate the desire for collaboration.

Other options for what to say include homeless, poor, unemployed, etc.; recognition that policies can have different impacts on different groups of people or those with different incomes; agree to disagree about how much government should assist those who have less.

Try expressing a belief in equal justice under law, equality of opportunity, The Bill of Rights, and the idea that all US citizens deserve the same rights.

Try mentioning any Second Amendment restrictions seen as appropriate (e.g., talking about “firearms” just for “law-abiding” or “those without mental illness”); In general: Expressing support for the Bill of Rights and many of its aspects.

Try potentially sharing view that decisions should be made at the lowest level of government possible, even if the liberal disagrees. In general: Expressing support for the Bill of Rights and many of its aspects.

Try acknowledging current large liberal/conservative differences; shared dislike of Congressional gridlock; shared beliefs in bipartisan or non-partisan solutions; trying to focus on what we share (e.g., a shared love of children, community, and country); if both believe, God and faith.

Try likely keeping it in the context of a personal relationship and asking liberals if they are comfortable with “Merry Christmas."

If believe, can acknowledge that markets do sometimes have undesirable outcomes; can try to get agreement on markets and capitalism in general, with different levels of government involvement in the process.

Try expressing a shared desire for children to receive a good education for our country’s future; love for the children; expressing support for public schools.

Try talking directly about climate change can be frustrating, but there can be shared beliefs in more general environmental goals, such as the importance of clean air and clean water to protect health.

Try agreement that some white and non-white Americans struggle; may be some agreement on certain class- or economics-based preferences, too.

Try simply using terms like civil servants or government employees; There can be common concerns about internet privacy and other technological issues that are not currently extremely partisan, rather than trying to decide what is a conspiracy theory or not.

Try expressing that it is one’s feeling that the federal government does not have the right ability to provide health care for all.

Try emphasizing that while individual choices are important, they are not the only important factor; if believe it, saying that while a future of self-sufficiency for all is ideal, there may be some need for assistance, at least when times get tough; sharing beliefs that racism, sexism, etc. are bad and, if believed, that there is a role for government to counteract them so people have a greater chance for economic success.

Try likely not bringing it up, but many liberals would instead agree with general statements like "our immigration system has problems."

If not dismissive of them, traditional media outlets, Big 3 TV stations; recalling when Walter Cronkite could hold the country’s attention.

There can be an agreement to disagree about the correct size of government, if there is no agreement on this topic.

Try a shared belief in a respectful police force; a society that can have both protests and order.

Try talking about how police are supposed to play an important role in keeping communities safe, and maybe acknowledging that some police behaviors have not been ideal.

In this case, it may be best to agree to disagree with certain types of punishments; there can be a shared belief that some rules are important.

Try simply toning down the sentiments and eliminating the use of the word “great,” and talking about a strong connection to the country and one’s patriotism.

This depends on the views of the liberal: as the religiosity of the liberal increases, more of these words become acceptable. conservatives can use them to explain their worldview, if the liberal wants to learn about it.

While somewhat different topics, there can be shared agreement on the First Amendment’s Freedom of Religion; additionally, it can be possible to discuss values that many religions share and that a liberal would also be comfortable with, such as care for the poor, or the Golden Rule about treating others as one would like to be treated.

Try focusing on a shared goal of reducing unintended pregnancies.

Try likely skipping this perspective; even if still an opponent of gay marriage, speaking highly of love and family.

Depending on the views of the conservative and liberal, it can be to express a shared belief that certain romantic acts are best (or only) should be done in the context of a committed and loving relationship.

Try likely not bringing it up, but many liberals would agree with loosely related statements like “terrorism is a problem” or “there are violent extremists around the world."

Agree to disagree about how much government should assist those who have less.

Really difficult, but could try to have agreement that an institution such as the UN has had difficulty with its effectiveness at times.

Honestly, probably try not bringing it up; if one believes in evolution, then expressing that view can be a point of agreement.

James D. Coan is a depolarization strategist and founder of Red Blue Together, which has shared stories of friends and those in close relationships across political divides, and a co-director of the Better Angels Media Initiative. He currently works as a management consultant and energy researcher. Coan previously worked at a think tank, where he often blended psychology and public policy. He began writing this after attending a Better Angels Maryland Alliance meeting. He has a Center bias.