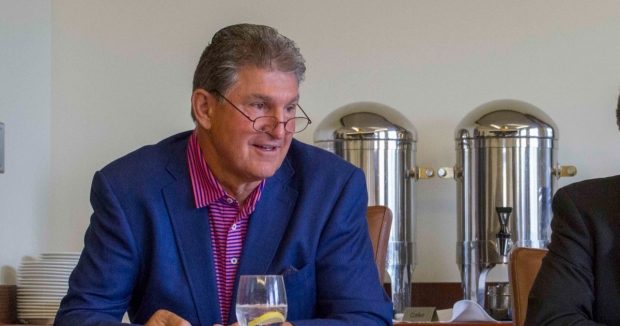 A Senate that’s split evenly between 50 members of each party can be a recipe for either compromise or chaos.

It’s inevitable that a moderate Senator who doesn’t always vote with his colleagues is going to attract an immense amount of anger and criticism from party loyalists. And tensions run especially high in the president’s own party, since the vice president’s ability to cast a tie-breaking vote is only relevant if every single member falls into line.

Joe Manchin knows this all too well. The West Virginia Senator has been reluctant to fall into line on several of President Biden’s legislative priorities, most notably in the debate over voting rights, and progressives have castigated him for his refusal to support their bill on what they see as a top priority.

Representative Mondaire Jones of New York was particularly harsh, saying that “Manchin would rather preserve Jim Crow”. His Empire State colleague Jamaal Bowman also weighed in, saying “Joe Manchin has become the new Mitch McConnell.” Several other voices from the left have weighed in as well, calling Manchin a traitor, a sellout and worse. Manchin’s fellow Democratic Senators have been more circumspect, but it’s clear that their patience is wearing thin too.

Intellectually, most of them know that Manchin represents a state that voted for Donald Trump by a forty point margin last November. The more politically astute Democrats also recognize that no other member of their party could possibly hold that seat, and realize that a Senator who votes with their caucus three-quarters of the time is a much better option than one who consistently votes Republican and who would support McConnell for Majority Leader rather than Chuck Schumer.

But the emotional intensity of their desires to move forward on climate change, gun control, immigration and many other issues is often overwhelming. And the realization that, coupled with a Democratic President and a Democratic majority in the House of Representatives, a unified 50 seat Senate caucus could move legislative mountains, is overwhelming. So they vent on Manchin at every opportunity, hoping that enough public pressure will turn him into a different type of Democrat than he has been for the last several decades.

The challenge is actually greater than just Manchin. On almost every priority issue on which he has withheld their support (and on the question of eliminating the filibuster as well), there are other, quieter Senate Democrats who have their own reservations on many of these bills and are perfectly happy to let Manchin take the heat for them. Which means that getting Manchin out of the way would not be the magic solution that many progressives believe.

The dynamic of a centrist Senator resisting the pull of his own party’s strongest partisans is nothing new. Twenty years ago, when Republicans controlled both the White House and the House of Representatives, another 50-50 Senate split was just as vexing for them as it is for Democrats today. Back in 2001, frustrated conservatives turned their ire on moderate GOP Senator Jim Jeffords (VT), who over the years had strayed from party orthodoxy on many high profile Republican priorities. That year, Jeffords’ disagreements with President George W. Bush over tax cuts and special education funding had forced Bush to scale back the size of his signature tax cut.

It was clear that Jeffords (who represented a state that votes almost as heavily Democratic as West Virginia leans Republican) could jeopardize other key aspects of Bush’s policy agenda as well. And angry conservatives were unsparing in their criticism of Jeffords for his disloyalty.

At a certain point, Jeffords decided that he’d had enough of those attacks from his putative allies. So when he announced that he was switching his party registration from Republican to Democrat, and flipping the Senate majority to the Democrats as well, bedlam broke loose on Capitol Hill. In addition to the ongoing criticism from conservatives, the final step for Jeffords came when the Democrats offered him a key committee chairmanship if he did switch. It’s not hard to imagine McConnell exploring similar options with Manchin right now.

Manchin recently unveiled a scaled down voting rights bill that he said that he could support. It’s not nearly as sweeping as the Democrats’ current proposal, but it represents a significant step forward. Let’s see if the committed progressives who represent their party’s base decide that working with Manchin on a potential compromise makes more sense than chasing him away.