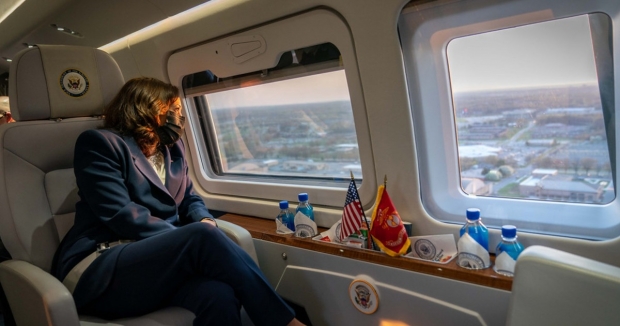 Kamala Harris has always understood the power of a good sound bite.

During a Democratic primary debate last year, she captured headlines by putting Joe Biden on the defensive during an exchange over mandatory school busing, when she personalized her argument by saying “And that little girl was me.”

Within no time, her campaign was selling T-shirts with that slogan on her website.

Two years earlier, Harris similarly stole the show during Supreme Court nominee Brett Kavanaugh’s confirmation hearings. During a fairly conventional discussion of abortion law, Harris asked the nominee if he could “think of any laws that give government the power to make decisions about the male body?”

Kavanaugh struggled through a series of non-answers and once again, Harris owned the headlines.

But this past week, while attempting to navigate the perilous path of immigration policy during her first overseas trip, Harris unintentionally served up a series of equally compelling sound bites that were much less helpful. On her first day abroad, at a stop in Guatemala designed to address the root causes of the dramatic increase in cross-border immigration flow, Harris delivered a stark warning to would-be migrants.

Then she elaborated: “You will be turned back.”

It’s difficult to deliver a message that’s more clear and to the point – or more harsh – to those hoping to escape the threats they face throughout the region. And Harris was strongly criticized by immigrant rights advocates, religious organizations, progressive activists and Democratic officeholders both in Washington and her home state of California. In many ways, the hits she took were unfair. Many administration officials, including Biden himself, have offered similar warnings over the past several months as they have attempted to straddle a self-contradictory policy that both welcomes immigrants and turns them away.

Biden inherited a miserable situation from his predecessor, who not only did his best to shut down almost every avenue for both legal and illegal immigration, but expended immense effort to dismantle this country’s apparatus for processing those who do cross the border. Biden’s long-term goal is a more sympathetic one, but his immediate challenge is to prevent the humanitarian and political disaster that would result from a continuing migrant flood at the border.

But the context in which Harris delivered this severe message was much different, as it took place during a trip to Latin America that was designed to recognize the root causes of poverty, crime, corruption and violence that drive so many desperate families and individuals to attempt the dangerous trip to this country. Saying those words in Washington, D.C. makes the speaker sound both unfeeling but realistic. Delivering that same statement in Guatemala – in the heart of the crime and corruption that fuels such desperation — just made the vice president sound mean.

As many of Harris’ progressive allies pointed out, her message was not only discouraging but factually incorrect. While the Biden Administration does not allow every undocumented immigrant who makes it into this country to stay, they have appropriately reversed Trump’s refugee policy and have restored America’s historical protocols that permit those seeking asylum to remain here until their appeals can be heard. So while the phrase “You will be turned back” was compelling, for many potential migrants, it was also false.

Harris began her day by angering those on the political left. But by evening she had also managed to provoke conservatives too. In an interview with NBC’s Lester Holt, Harris offered up another memorable sound bite in response to Holt’s questions about not traveling to the U.S.-Mexico border. First, Harris asserted that she had been to the border. Then after Holt corrected her, Harris proclaimed “And I haven’t been to Europe”.

Harris’ goal was to remind the audience that she had been in this job for just a few months and that she would travel much more broadly in the years ahead. But instead, it sounded as if she were attempting to make a joke out of a deeply serious subject. And when she followed that unfortunate sound bite with another, things got even worse.

Attempting to dismiss the relevance of Holt’s question, Harris then said “I don't understand the point that you're making.”

Which is a sound bite that will show up in Republican advertising for years to come. Harris’ visit was designed to highlight the Biden Administration’s agenda for long-term solutions to deep-rooted challenges. But instead, her sound bites will provide the lasting memories and definition for her trip.