Vice President Kamala Harris received criticism from fellow Democrats and human rights groups after she told potential migrants "do not come" at a press conference with the president of Guatemala during her first international trip since taking office. On Tuesday, when NBC's Lester Holt asked Harris, who was tasked by President Joe Biden with handling immigration, why she hasn't visited the border yet, Harris said, "At some point, you know, we are going to the border," Harris. "We've been to the border." When Holt replied that she hadn't been to the border, the vice president said, "and I haven't been to Europe...I don't understand the point that you're making...I'm not discounting the importance of the border." Rep. Alexandria Ocasio-Cortez (D-N.Y.) tweeted Monday, "First, seeking asylum at any US border is a 100% legal method of arrival. Second...We can’t help set someone’s house on fire and then blame them for fleeing." Harris has said that she will tackle the flow of migrants at the border by addressing the "root causes" in Central American countries, such as lack of economic opportunity.

Voices from the right tended to contrast Harris' recent remarks with her past stances on immigration during her presidential campaign, and highlighted criticism from Democratic lawmakers. Some left- and center-analysts suggest that Harris is playing to voters by taking a centrist approach with her attempt to quell traffic at the border. Some left-rated outlets also highlighted quotes from asylum seekers.

From the Center
317
Immigration
Harris, Ocasio-Cortez and the Democratic divide on immigration
The Hill 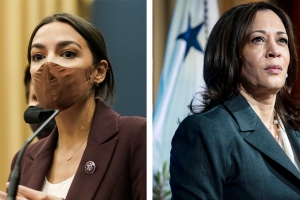 Two of the biggest names in the Democratic Party have split over one of the most vexing issues facing President Biden.

Vice President Harris, on her first international trip since taking office, issued a stark warning to would-be migrants from Guatemala on Monday. “Do not come, do not come,” she said at a news conference.

Rep. Alexandria Ocasio-Cortez (D-N.Y.) swiftly branded Harris’s comments “disappointing” and pointed out that seeking asylum at the U.S. border is “a 100% legal method of arrival.”

The congresswoman from New York went on to link migration to past... 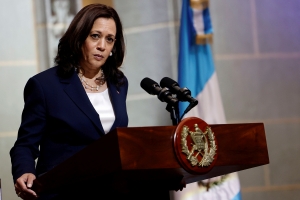 Kamala Harris was not happy about being publicly associated with the Mexican border, and after her disastrous interview with NBC’s Lester Holt and her flailing trip to Mexico and Guatemala, we can see why she would be generally leery of public-facing responsibilities. The entire excursion was a fiasco in just about every possible way, even down to her plane having to turn around and return to Andrews Air Force Base half an hour into its flight. Harris may be comfortable as a partisan attack dog and a historic symbol, but everyone involved will...

Read full story
Some content from this outlet may be limited or behind a paywall.
See full media bias rating for National Review
From the Left
317
Immigration
‘Do not come’: Kamala Harris’ three words to Guatemalans stir debate and backlash
Los Angeles Times 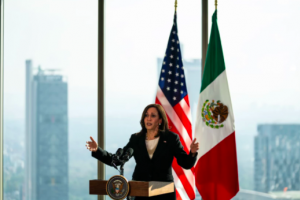 But when Vice President Kamala Harris gave a high-profile speech Monday in Guatemala, in which she told would-be immigrants from Central America “do not come” to the United States, her words instantly provoked ripples of anger and concern among immigrant rights groups and progressives.

Crisis at the border: How it happened and what is being done

When President Joe Biden took office in January, there was an expectation that changes to policies on the southern border would help reverse the...

U.S. to allow more parents to petition for their children to immigrate legally from Central America

The Biden administration on Tuesday made tens of thousands of Central American immigrants in the U.S. eligible to petition for their children to come to the...