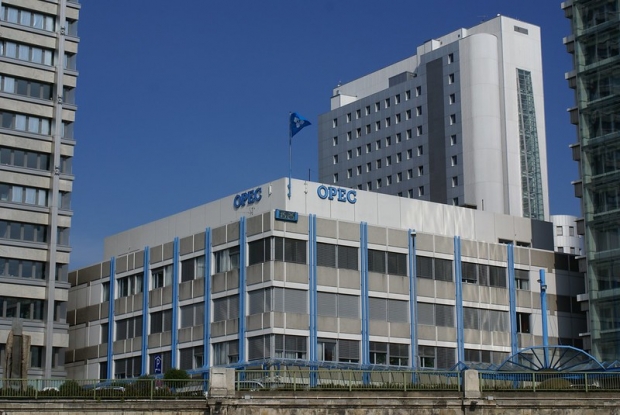 The OPEC headquarters in Vienna. (alex.ch/Flickr)

When Joe Biden traveled to Saudi Arabia this past summer, he didn’t exactly grovel. But he swallowed a lot of pride.

During the 2020 presidential campaign, Biden had promised to make the Saudi government into an international “pariah” and promised to cut off arms shipments to the country if they did not improve their approach to human rights. Biden’s administration released classified documents that held Saudi Arabia’s de facto leader, Crown Prince Mohammed Bin Salman (MBS) responsible for the grisly murder of Washington Post columnist Jamal Khashoggi in 2018, and Biden himself refused to speak with the crown prince for months after taking office, communicating only with his father, King Salman bin Abdulaziz, the country’s ailing and titular head of state.

But the war in Ukraine put new pressures on the United States, and Biden was forced to compromise on his principles in hopes that deprioritizing his objections to the prince’s conduct might help secure new energy resources for the U.S. and its European allies. It was a painful episode, visually underscored by the awkward fist bump that the two men shared when first meeting. But given Europe’s dependence on Russian oil, and the skyrocketing cost of gasoline in this country, Saudi Arabia’s massive energy resources had suddenly become much more important.

But then the Saudis and their colleagues in the Organization of the Petroleum Exporting Countries (OPEC) announced last week that they were drastically reducing their production targets, which will result in a considerable rise in world oil prices at the worst possible time for Biden. As winter approaches, Europeans will forced to undergo difficult cutbacks in their own energy usage. And just weeks before the critical midterm elections in this country, domestic gasoline prices are rising again.

The ramifications in U.S. political could be dire for the president and his allies. For months, the two parties have argued back and forth over the relative potency of inflation and abortion as seminal issues for American voters. When the Supreme Court overturned Roe vs Wade this past summer, followed by a sustained decrease in gasoline prices, Democratic candidates across the country began to achieve clear gains in their races. But inflation has returned with a vengeance, and OPEC’s decision reinforces the import of the Republicans’ most valuable talking point and provides GOP candidates with a measurable boost heading into the campaign’s home stretch.

But the international geopolitical ramifications are far greater. While Russia is not a formal member of the core OPEC group, it has formed a close alliance with the cartel in recent years. As a part of what’s referred to as “OPEC+”, Vladmir Putin has formed a close working relationship with most of the nations’ leaders, but none closer than his friendship with MBS. At a gathering of international leaders only weeks after Biden had released the intelligence implicating the crown prince in Khashoggi’s murder, when most of the attendees kept their distance from MBS, Putin greeted him with an enthusiastic high-five and warm handshake. That personal warmth is paying great dividends.

In effect, Saudi Arabia and the other OPEC nations have now allied themselves with Russia against the U.S. and Europe. Biden’s efforts to prevent the Saudis from strengthening their relationship with China, which was one of the key goals of his summer trip, is now in peril too. The initial White House reaction to OPEC’s decision was extremely combative, which does not suggest any serious efforts at reproachment anytime soon. Democrats in Congress have been even more aggressive in their calls for retribution toward Saudi Arabia, but there are practical limits to such threats given the critical role that the Saudis play in the Middle Eastern coalition against Iran.

Saudi Arabia’s leaders were fully aware of the problems they would be causing for Biden. (Some observers believe that the Saudis would rather have Donald Trump back in the White House, which was an added motivation to weaken Biden so close to the midterms). But they proceeded anyway, which tells us that Biden’s attempts at fence-mending have made little impact.

The international landscape is now even more challenging for Biden, but he’ll be even less able to take on those challenges if his party suffers sizable losses in November. So he’s hoping that abortion and Putin – and Trump – will be enough to convince swing voters to overlook how much they are paying to fill their gas tanks.