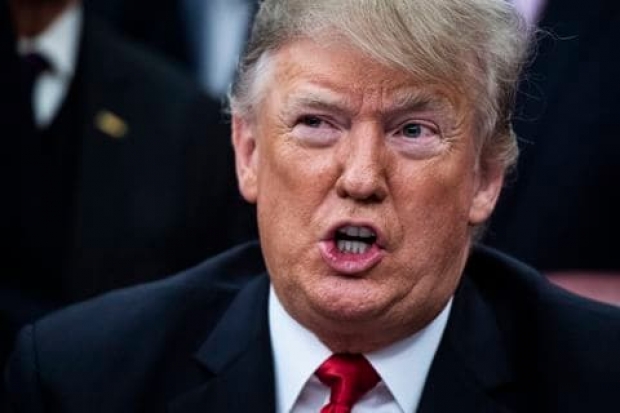 The partial government shutdown had no end in sight on Thursday as President Trump and Democrats remained at an impasse over funding for Trump's border wall.
Both sides of the aisle have depicted the shutdown as needless and preventable. Some have accused Democrats of being obstructionist and weak on border security, while others have blamed Trump for upending Washington operations by refusing to sign a spending bill.
Check out some other big stories this week: Trump Makes Surprise Visit to Iraq, Defends Syria Policy; Second Migrant Child Dies At U.S. Border; and Supreme Court Denies Trump Bid to Enforce Asylum Ban.
Snippets from the Left
Trump’s shutdown stunt is an act of needless stupidity
Washington Post Editorial Board
"'IT’S ACTUALLY part of what you do when you sign up for any public service position.' So said Rep. Mark Meadows (R-N.C.) when asked about the hundreds of thousands of federal workers who will have to work without pay or be furloughed without pay over the holidays in a partial government shutdown. You won’t get any argument from us about the willingness of those who go into public service to make sacrifices. But they do so hoping to accomplish some good for their fellow citizens, not to be pawns in pointless political gamesmanship.
...
That seemed to be of little matter to Mr. Trump, who last week boasted he would be 'proud' to shut down the government, glad to 'take the mantle. I will be the one to shut it down.' He changed his tune on Friday in trying to shift the blame to Democrats for not going along with his demand for money to build a border wall he once promised would be financed by Mexico.
...
Any doubt that it is politics — not principle — driving Mr. Trump was erased when he flip-flopped this week on the stopgap spending bill. He signaled he would sign on to a measure, passed by both House and Senate, without wall funding, but then buckled to criticism from the conservative media. Instead of standing up to him — and doing their job of keeping the government running — House Speaker Paul D. Ryan (R-Wis.) and Senate Majority Leader Mitch McConnell (R-Ky.) — went along, once again enabling the worst instincts of a bad president."
Snippets from the Center
Congress meets briefly, takes no steps to end shutdown
Reuters
"Both chambers of the U.S. Congress convened for only a few minutes late on Thursday, but took no steps to end a partial federal government shutdown before adjourning until next week.
Showing little sense of urgency over the shutdown, now in its sixth day, the Senate and the House of Representatives did nothing to restore funding for the roughly 20 percent of the government affected.
...
The shutdown was triggered by Republican President Donald Trump’s demand, largely opposed by Democrats and some lawmakers within his own party, that U.S. taxpayers provide $5 billion for a wall he wants to build along the U.S.-Mexico border.
...
The shutdown has had only a limited impact so far, partly due to holiday vacations being underway for the 800,000 or so federal workers affected, though that could change soon."
Snippets from the Right
The unnecessary partial government shutdown
Washington Times
"Oddly, the Democrats once supported border security — and not that long ago. None other than Hillary Clinton boasted in 2015 that 'I voted numerous times when I was a senator to spend money to build a barrier to try to prevent illegal immigrants from coming in. And I do think you have to control your borders.' Now they sing a rather different tune. Mr. Schumer and Ms. Pelosi are adamant that they won’t spend a cent on the wall. Ms. Pelosi has even called the wall 'immoral.'
...
The Democrats are also shrewd enough to realize that blocking the wall will kneecap the president’s re-election chances. Mr. Trump’s central campaign promise, after all, was that 'big beautiful wall.' Should they stymie his building of it, they’ll deny the president a powerful re-election plank; and they’ll also be able to argue, not unconvincingly, that Mr. Trump has not kept his promises.
...
In the end, then, we suspect the Democrats will probably want to make a deal; perhaps a bit less than $5 billion to save face, but at least something. Throughout the 2016 presidential campaign, Mr. Trump promised to 'build a wall and make Mexico pay for it.' There was never much chance he’d get Mexico to chip in. He might have better luck with a new slogan now: 'Build a wall and make the Democrats pay for it.' They just might."
Discover more on this topic on AllSides.
Immigration, Government Shutdown, Border Wall, Donald Trump, Democrats, Story Of The Week, News