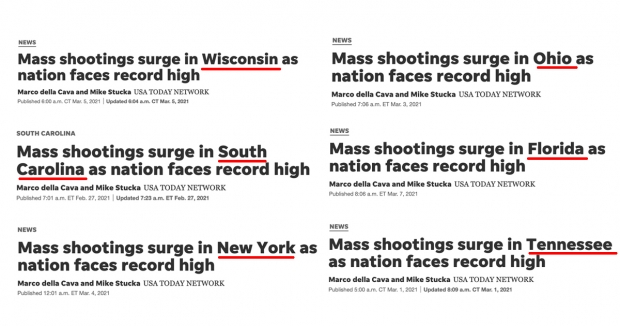 On Thursday, some Twitter users pointed out a seemingly strange phenomenon: Googling “mass shooting surge” returned the exact same headline and article from seemingly different sources, with various locations plugged in to appeal to different states: 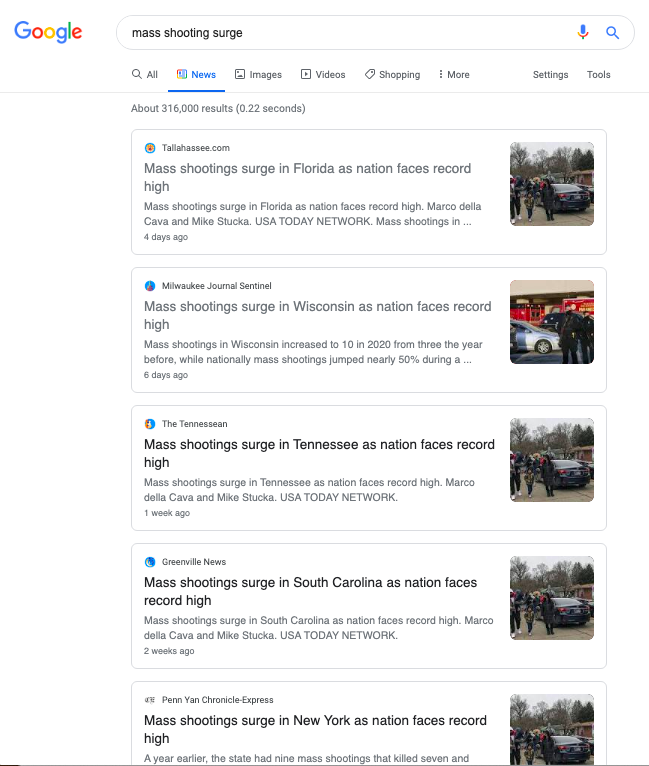 Upon closer inspection, the articles illustrate how content from media conglomerates masquerades as local journalism.

The articles are all from the USA Today Network (Center bias) and target Ohio, New York, South Carolina, Tennessee, Wisconsin, and Florida.

Those living in the locales where these articles appeared may think they are reading local journalism written by local reporters, when in reality, these articles are from a national journalism company, USA Today Network, a media conglomerate that owns over 300 local digital properties in 46 states.

The articles each follow the exact same formula. The first two paragraphs have different numbers plugged in for each locale. Compare the first few paragraphs of some of these articles below: The formula for the first few paragraphs generally appears to be this:

Each article follows nearly this same formula before going on to identical copy that includes interviews with people from organizations such as Everytown for Gun Safety, Gun Violence Archive, The Police Executive Research Forum, the National Urban League, Alliance of Concerned Men, and professors at Princeton and Northeastern.

The plug-and-play nature of the article comes into focus when we consider the larger trend of conglomerate journalism — national media companies buying up local or family-owned properties.

Keeping an Eye on Conglomerate Journalism

Instead of our journalism being bottom-up, it’s increasingly coming to us top-down. Those who think they are getting reporting on a key issue from journalists who are invested in their local communities may actually be receiving content from a major corporation with national or even global financial and political ties and interests. The somewhat obvious downside of news conglomeration is that it makes potential partisan interests and media bias hidden from us.

Conglomerate journalism isn’t new. You may remember a few years ago when a video of local news anchors reading the exact same segment went viral after Deadspin’s Timothy Burke noticed they were all affiliates of Sinclair Broadcasting Group, which owns 193 local TV affiliates and has been accused of conservative bias. This, plus the plug-and-play nature of the articles from USA Today Network highlight how conglomeration can reflect in news media content.

Other news outlets may plan to take a similar route. The New York Times (Lean Left bias) in 2003 stated that its “long-term strategy is to operate the leading news and advertising media in each of the markets in which we compete—both nationally and locally.”

The Knight Foundation, a national foundation that invests in journalism, notes that “roughly half of all newspapers in the country changed ownership over the past 15 years, some multiple times. Since 2014, most of the 1,200 papers sold have been either family-owned enterprises or small private regional chains. The most active purchasers of newspapers in recent years have been New Media/GateHouse [which merged with Gannett in 2019], Adams Publishing and AIM Media. Over the past four years, these three chains have purchased nearly a third of the papers that were sold.”

“The consolidation of the newspaper industry, which places the ownership of many media properties into the hands of a few large corporations, shifts editorial and business decisions to people without a strong stake in the local communities where their papers are located,” the foundation states.

The news media changeover from local ownership to national ownership highlights the globalism versus localism debate, and reminds us that in a democratic republic, everyone wants to sway your opinion toward policies that favor them and their causes. News media is power, and those at the top can reach even more people if they purchase local properties. It gives them more control over the stories, sentiments and perspectives we see. Like all media, some may do a good job of curbing bias, while others don’t.

We have to be on the lookout for bias from stories that come to us top-down from national media conglomerates, and should scan it for the 11 Types of Media Bias. When AllSides analyzed the USA Today piece, we found it wasn’t overly biased. In light of the nuance that’s actually contained within the article, the headline is very sensationalist. And it does quote more people from left-wing and purportedly nonpartisan organizations — no right-wing organizations — which is a type of media bias by omission and bias by viewpoint placement. (AllSides doesn’t rate nonprofits, but Everytown for Gun Safety is a well-known liberal gun control group; the others claim to be nonpartisan, though AllSides hasn’t assessed them for bias).

Some on the AllSides team pointed out that the timing of the piece could be related to recent moves by Democrats to enact gun control measures. Yet the piece also hits on many points that are sometimes overlooked in the media when it comes to violence and even COVID-19, which should be praised.

To highlight bias by viewpoint placement, the piece early on quotes someone who says that “COVID-19 highlighted long-standing healthcare, education, housing and employment inequities in the nation's communities of color and only policy changes that improve living conditions will lead to shooting reductions.” This seems biased toward the Biden administration’s equity agenda, and omits the voices of those who would not agree that policy changes to ramp up public services would reduce gun violence; such voices claim that the roots of such violence lie in things like fatherlessness and gang culture that we’d be better off addressing.

However, much later in the article, the piece does at least reference gangs, noting that “overall, the types of gun-related violence that took place over the past 12 months often involved family members and gang members, experts note.” Someone else writing the piece who doesn’t favor equity legislation may have positioned that point closer toward the beginning of the article. Remember that bias by viewpoint placement is when a story only features viewpoints from sources and commentators on one side, or includes them near the top of the story/in the first few paragraphs; it does not include viewpoints from the other side, or buries them at the end of a story.

Of course, a journalist can’t possibly capture everything in one piece, and some information will always have to be privileged over others. Journalists should do their best to give a balanced view, and readers should learn to spot bias.

Some on the AllSides team were impressed to see the piece did mention an element that often goes overlooked in discussing violence in 2020 — that mask-wearing as a result of the COVID-19 pandemic “played a role in ratcheting up tensions that often led to violence.” It’s well studied that wearing masks minimizes social responsibility and is linked to destructive behavior and rule-breaking, yet this is not a perspective we see a lot in articles that discuss the pandemic and/or violence, so the piece deserves credit for showcasing perspectives often ignored.

It also quotes a professor of law, criminology and public policy who points out nuance in the data, noting that “you read that there were more than 600 mass shootings last year and you immediately think, 600 El Pasos [referring to the 2019 shooting at an El Paso, Texas, Walmart where 23 were killed and 23 others injured]. That’s not what this is.” The article notes Fox said that mass shootings, when compared to mass killings, typically have a lower death count and often involve individuals who know each other and have a pre-existing conflict.

It’s always worth being aware of whether a piece is coming from a local writer or a national media conglomerate, and checking it for the 11 Types of Media Bias. Doing so can help us to gain perspective, understand what may be missing, or spot hidden agendas.