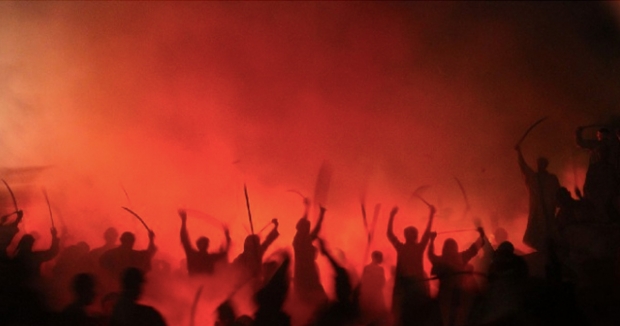 This piece is from a writer rated Center.

Life, Liberty, and Hypocrisy for All

The shocking events of Jan 6, 2021 make for fun media analysis. In one day, the conservatives media became sympathetic to rioters and antagonistic to Capitol Hill police. Coincidentally, the liberal media suddenly valued law enforcement, and was furious that protesters were raiding a federal building that wasn’t the Portland Courthouse.

This swift narrative reversal was one of many in 2020/21. Whether it’s the efficacy of masks, the harm of mass gatherings, or the integrity of elections, we as a nation have continuously flip-flopped this year. Of course, while our two media wings can change their minds within weeks or days, they can never hold the same positions at the same time.

Thankfully these media turnabouts are educational, finally putting to bed the idea of impartial news. We now know that all media is biased and that all outlets use a few classic tricks to advance their specific belief system. In this article I’ll use data collected from mediacloud.org to show how these tricks work¹.

It’s pretty easy to tell a given article’s bias just by looking at the words in the title. Let’s look at two of the biggest news terms in the past year — ‘riots’ and ‘protests’. In particular we’ll look at how often these words are used in headlines from various sources.

The Y axis of the above charts show how many articles were published with the words “Riot” or “Protest” in the headline. The X-axis shows the political slant of the publishing organization.

As we can see, right-wing outlets were much more likely to talk about ‘riots’ in the headline while left-wing media was all over “protest” stories. To figure out where these news organizations fit on the political spectrum, I used the extremely valuable media bias ratings from AllSides.com. This data surveys thousands of readers and leads to fairly obvious conclusions — ie. Fox News is “far right” and CNN is “far left”.

Of course, this doesn’t tell the whole story since it only looks at the headline. If we check the timing of stories that contain the words ‘riot’ or ‘protest’ in article body, we see the broader media trend. It appears that most media labelled the events of summer 2020 as “protests”. Similarly the Capitol Hill event was unanimously termed a “riot” (or more recently an “insurrection” )

The headline game is a classic marketing move and it’s pretty easy to detect. However there are more subtle and powerful ways that the news manipulates us. Lets look closer at those riot/protest stories. If we dive into these stories, they mostly center around what one NPR pundit unironically called “our summer of racial reckoning”. We can see this by plotting stories with the word “racism” in them over time.

As expected, right-wing media was wary of discussing the racial issues that drove much of the violence.

This isn’t to say that left-wing media doesn’t have its own blind spots. How many of the articles that discuss racial injustice also acknowledge the rampant looting that occurred this summer? The answer is not many. If we look at articles with “Looting” in the headline, a different picture emerges.

The low bar on “right” wing media is mostly a function of how few outlets are moderately conservative. Otherwise, the issue was confined to center and far-right sources. Here’s a plot of the publication that talked about this topic the most.

Interestingly local news was less weary of the topic, especially in Chicago where looting was particularly bad.

These are just a few examples, but they raise some troubling questions. How many important stories aren’t covered just because they don’t fit into a dominant news narrative? It’s not simply a left-right issue either. For example, stories about foreign wars are barely covered in our national media. Here’s a bar chart on who published the most headlines with “Yemen” and “Syria” in 2020. As you can see, the number of articles is small and the main source is a wire service.

There are many ways the narrative wars are fought. We discussed two tactics— the names we use and how often we use them. These tricks amount mostly to setting up the battlefield. They allow the combatants to chose where they want to fight in the narrative landscape.

This last trick is the closest thing we have to actual combat. It involves trying to take the high ground. It’s the art of choosing what words you use around a topic. In my opinion, the best practioners of this art are Fox News and CNN. Let’s take a look at some common words and see how they are described in headlines from the two giants.

When it comes to talking about the “police”, Fox likes to play up left-wing efforts to ‘defund’ them. No doubt this riles their base who are generally supportive of law enforcement. They also like to mention places like Portland and Seattle where protests were particularly violent. CNN on the other hand emphasizes police “reforms”. They only write about “Minneapolis” and “Lousville” where police killings were flagrant. Each side covers the same stories, but chooses very different examples of what to describe.

How about our old friend ‘protest’ stories. How do the top media organizations in America cover them?

As is obvious by now, CNN loves to write about Black Lives Matter protests. For Fox News, the main cause of civil unrest is ‘coronavirus’ ‘lockdowns’. The divergence is even clearer when we look at “riot” headlines. Fox News describes both the events on Capitol Hill and those in Portland as “riots”. For CNN, Jan 6, 2021 was the only newsworthy riot in a year.

Finally let’s look at the topic of George Floyd. Both news sources stick to their knitting and focus on the role of President Trump in this story. However, CNN likes to emphasize race issues, while Fox likes to focus on the protests (or riots or ‘unrest’ or whatever) that resulted.

The last media tactic I want to talk about is timing. We’ve seen that outlets choose to cover things that suit their political agenda. This means that certain stories only make sense at certain times. For example, There were almost no stories about the “Proud Boys” in 2020 until they were brought up in a Presidential debate. After that, the group became a useful enemy for the liberal press during the election cycle. Similarly, Antifa stories spiked before November as the conservative press needed their own enemy to drive engagement.

In general each group is used as a bogeyman by the other side, especially for the extreme wings.

Luckily the many crises of the 21st century are shedding light on how this propaganda works. Whether it’s the big lie of Iraq WMDs or the confusing coverage of the Coronavirus, more and more of us are learning that the news is not an impartial arbiter of truth. Old Soviets knew to read Pravda and other official sources somewhat askance. By now Americans have learned the same lessons about Fox, CNN and the New York Times.

1 — all data collected from 04/01/2020. Code for this project is visible at https://github.com/taubergm/Protest_or_Riot_Media

Michael Tauberg is a Bay Area engineer. He uses data to study media and society. He has a Center bias.

Photo by Hasan Almasi on Unsplash