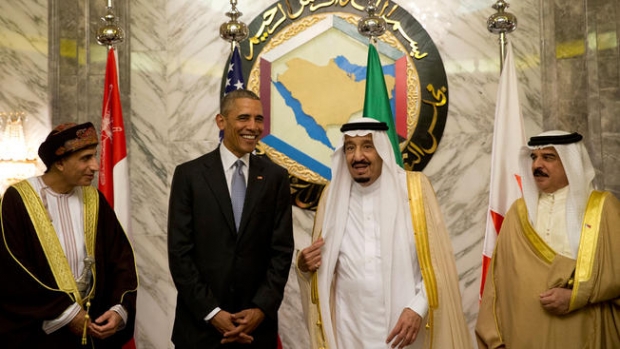 Saudi Arabia has told the U.S. that it will sell off 100’s of billions of dollars in American assets if Congress passes a bill that allows foreign governments to be sued for any role in 9/11 attacks. The threat has been hotly debated. Senators were warned there could be serious economic and diplomatic fallout if this law, Justice Against Sponsors of Terrorism Act (JASTA), is passed. In the wake of this tension, Obama visited Saudi Arabia this week. We’ve seen a lot of diversity in the coverage of this visit. For example, while Fox News published an opinion article by lawyers for 9/11 families and victims that supported JASTA, the Fox Opinion piece about Obama’s Saudi visit (shared below) doesn’t mention the 9/11 bill and focuses instead on issues of Saudi and Middle East security. For more contrast, see what we found from the Left and Center below as well.
See other news featured by AllSides such as Clinton, Trump Win Big in NY, Analysis of the New York Primary, GOP Delegate Race and the latest AllSides News.
Snippets from the Left Leaning
OPINION: The teachable moment of Saudi Arabia’s economic threat against the United States
Washington Post
“Global investors continue to shovel money into the United States; if the Saudis go, the experts say, others will take their place.…To elaborate a bit more, the current Saudi threat is way weaker than the implicit Chinese threat of seven years ago, because:
-Saudi Arabia holds fewer dollar assets than China;
-Saudi Arabia’s 2016 economy is far less imposing than China’s 2009 economy;
-The U.S. dollar is even more dominant now than it was in 2009;
-The U.S. economy — in particular the fiscal picture — is in far better shape now than in 2009;
-The array of alternatives to dollar-denominated assets look way worse now than in 2009;
The one difference in the Saudis’ favor is that the kingdom is a U.S. ally, while China is viewed as a rival. This helps explain the administration’s position on this issue (though I suspect its concern is about the precedent this bill would set if it became law).”
Snippets from the Right
OPINION: Mr. Obama, you should have stayed home. Your trip to Saudi Arabia, Europe signals weakness
Fox News
“Obama’s tin-eared comments about Saudi Arabia may be why Saudi King Salman was not there to greet him when the president’s plane landed in Riyadh Wednesday.  The King did greet other heads of state when they arrived, according to Reuters.
Given the way he has ignored Saudi security concerns and tilted toward Iran during his presidency, I assume the Saudis have written off Mr. Obama and recognize that most experts in Washington – Republican and Democrat – do not share his radical and disjointed foreign policy views.  The Saudis know their strong relationship with the United States will survive Barack Obama’s presidency.  But even if they do understand this, Saudi leaders also know that this president’s failed Middle East policies did enormous damage to Middle East security that they will have to live with for many years to come.
Aside from Obama’s Iran policy – which is making Iran a regional hegemon – Riyadh is worried about the Syria/Iraq situation and the absence of a serious U.S. strategy to defeat ISIS and restore stability to the region.”
Snippets from the Center
White House: 9/11 bill did not come up in Saudi discussion
Politico
“The White House has recently threatened to veto the bill, which it said would jeopardize already strained relations with the U.S.' strategic regional ally and put Americans at "significant risk" if other countries pass similar laws. Saudi officials warned that the country would sell off millions in American assets if the bill is signed into law…
‘My sense is that the Saudis are aware of the position that we’re taking on the legislation, so it’s not as if they needed to spend a lot of time addressing with us,’[Ben Rhodes] said. ‘So it wasn’t a subject at the bilat even as obviously there have been many statements about it over the last several days.’
At the center of the issue are 28 pages of the Joint Congressional Inquiry that remain classified and could shed light on the role of foreign governments in the plot that killed nearly 3,000 people in New York, Virginia and Pennsylvania.
‘The president has asked for this declassification review,’ Rhodes said. ‘We have been deferential to the [Office of the Director of National Intelligence] in leading that review, and when that's done, we'd expect there'll be some degree of declassification that provides some information.’”
Discover more on this topic on AllSides.
Barack Obama, Saudi Arabia