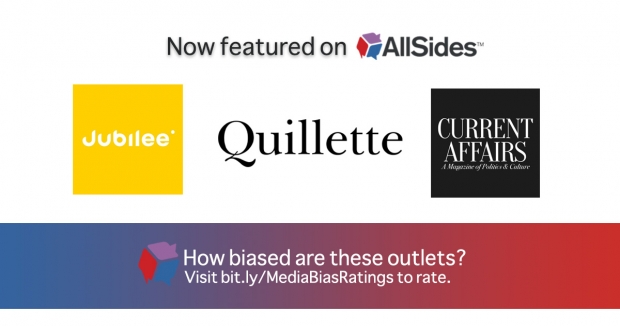 AllSides is continually evaluating media bias as our media landscape grows. We frequently add news sources to the site to help you get the most reliable data on media bias. In order to ensure our media bias ratings are accurate and up to date, we need the AllSides community to participate.

We just added three new media sources to the site, which we now invite you to rate on AllSides: Quillette, Jubilee Media, and Current Affairs Magazine. The more you participate, the better our ratings will be and the more news sources we can rate. We've also updated our media bias rating for IVN.

Quillette bills itself as a "platform for free thought."

"We respect ideas, even dangerous ones," the website reads. "We also believe that free expression and the free exchange of ideas help human societies flourish and progress. Quillette aims to provide a platform for this exchange."

In an interview, Quillette founder Claire Lehmann told The Australian that her publication is "independent, not polemical, not writing on behalf of vested interests and reasonably centrist."

However, AllSides' initial media bias rating of Quillette is Lean Right. With recent headlines that include, "On Toxic Femininity," "Political Moderates Are Lying," "Privilege Versus Paranoia," and "Why Women Don't Code," an initial independent editorial review of Quillette lead AllSides to determine its valuing of free speech — not "right" speech — and exploration of ideas challenging modern-day progressive ideas warrant it a Lean Right rating. Worth noting: some on the team thought Quillette deserved a Center or Lean Left rating. This is because Quillette features classically liberal arguments, but classically liberal ideas are now more commonly associated with the Right. Our confidence rating for Quillette's media bias rating is "Initial or Low." Agree or Disagree? Rate Quillette's media bias on AllSides now.

Jubilee's Middle Ground series, available on YouTube, warranted it inclusion on AllSides. The project features people with opposing political and religious views discussing these topics with one another.

With videos such as, "Pro-Choice and Pro-Life Supporters Search for Common Ground," "Pro-Gun versus Anti-Gun: Is There a Middle Ground?" "Can Trump Supporters and Immigrants See Eye to Eye?" and "Athiests and Christians Debate Truth and Belief," AllSides' initial media bias rating of Jubilee Media is Center. Rate Jubilee's media bias on AllSides now.

Current Affairs is a bimonthly print and online magazine and podcast that discusses political and cultural topics from a left-learning standpoint, according to Wikipedia.

Recent Current Affairs headlines include, "Abolishing ICE is Only the First Step," "The Incredible State-Level Single-Payer Plan That Everyone Should Be Talking About," and "There is Nothing Inherently Wrong with State Ownership." With its focus on perspectives favorable to socialism and social justice, our initial media bias rating of Current Affairs is Far Left. What do you think? Rate Current Affairs' media bias on AllSides now.

IVN bills itself as "an open news platform for independent-minded authors and readers."

IVN's stated mission is to provide "unfiltered political news and policy analysis across the political spectrum. Unlike traditional media, IVN actively encourages writers and readers of differing political tendencies to engage in a constructive dialogue."

IVN has been featured on the AllSides Media Bias Ratings for some time, however, we recently updated our confidence level in our media bias rating of the network as Center.

After using and watching IVN for a over a year, we moved our confidence level in its media bias rating as "Center" from "Initial or Low" to "Medium." This is because IVN has consistently published articles that represent an independent mindset rather than a partisan, left or right leaning. Still, IVN does have its own biases, and readers should recognize that "center" is not the same thing as neutral. IVN is not neutral in that it does often advocate for alternatives to the Democratic and Republican Party as well as reforms to change the status quo. More on IVN's media bias rating.