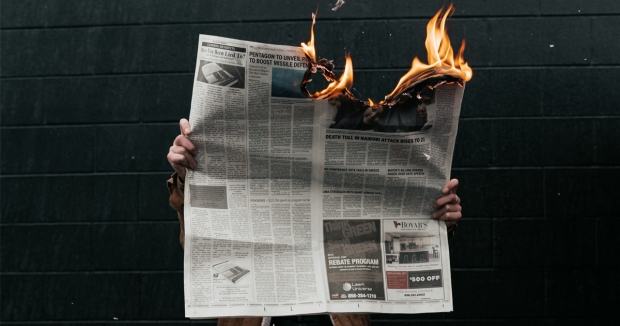 The recent story of a 12-year-old Virginia girl who falsely claimed classmates cut off her hair may reveal media bias on the part of the New York Times and other outlets.

A Sept. 27 Times story detailed allegations from Amari Allen, a black student at a Christian school in Virginia, who said that three white classmates pinned her down, insulted her, and cut off her dreadlocks on the school playground. Days later, the girl said she had lied about the incident. In their initial reporting, many media outlets noted that Vice President Mike Pence’s wife is a teacher at the school. 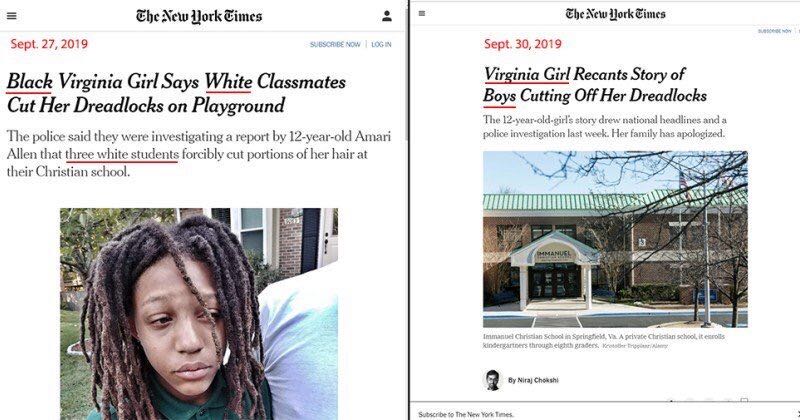 The change in the Times headlines was noted by Maxim Lott, Fox News writer and executive producer for Stossel TV, and Jerry Coyne, a blogger and biologist. Some criticized the paper for initially framing the incident as having racial motivations while others criticized them for failing to wait for facts to come out:

12 year olds make mistakes. It happens. The bigger error was national media immediately running with the story while the adults were still getting to the bottom of what happened.

This is not the first time the media ran with a story, framed it as racially motivated, then reported it turned out to be untrue. Back in January, many media outlets reported that 16-year old Covington Catholic student Nick Sandmann was harassing or mocking a Native American man in a viral video, but shortly after, more video emerged painting a different picture. Weeks later, many media outlets reported unquestioningly on what later turned out to be a hate crime hoax by actor Jussie Smollet.

These incidents raise serious concerns about modern-day journalistic ethics and practices. When should reporters run stories about allegations, and when should they hold off until investigations occur and facts become clearer? Further, how can we determine when race is relevant enough to include as an important detail of a story? What are our metrics for proving incidents are racially motivated versus incidents that simply involve people of different races?

In addition, some media outlets, such as NBC News and Newsweek, included the fact that Karen Pence works at the school in their headlines. Was this fact really relevant? Pence herself wasn’t involved in the incident at all. This may be my own bias showing, but I have to wonder if this fact was included because the incident was meant to reflect poorly on her and her husband.

Most right-leaning media outlets did not cover the initial allegations, but did cover the follow-up story that revealed it to be untrue. Outlets as prominent as The New York Times, NBC, Fox News, Newsweek, and others that covered this story have significant responsibility to their massive audiences to report factually and fairly. Stories like this may speak to the overall liberal lean of the media, and the conscious or subconscious effect a left bias may have on news reporting and curation.

Our 24/7, social-media fueled news cycle creates an environment in which media outlets, eager to be the first to break a story or suit their own narrative, don’t pause to dig deeper or wait for all the facts to come out. Or, motivated by their own bias, they rush to frame an incident as motivated by racial hatred despite a lack of evidence.

It is part of the media’s job is to hold bad actors to account, but both children and adults lie. Though the media salivates at the chance to post a juicy story, innocent people — often children — are increasingly being caught in the crosshairs, casualties of expediency. Next time, the adults in the room may want to take a time out.

This piece was reviewed by Henry Brechter, AllSides Daily News Editor. He has a Center bias.