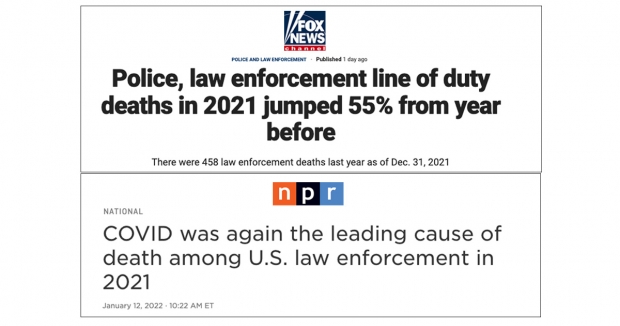 “Police, law enforcement line of duty deaths in 2021 jumped 55% from year before,” a Fox News headline declares. Meanwhile, NPR’s headline reads, “COVID was again the leading cause of death among U.S. law enforcement in 2021.”

When I first read Fox News’ headline, my first thought was that officers were dying from an increase in violence and animosity toward them, or from more dangerous policing situations overall. It wasn’t until I read NPR’s headline that I realized the report is counting COVID-19 deaths as line of duty deaths.

NLEOMF counts COVID-19 as a line of duty death, counting fatalities in which "officers have died due to direct exposure to the virus during the commission of their official duties." It’s unclear how NLEOMF determined that an officer caught COVID-19 in the line of duty rather than contracting it while off-duty.

"The NLEOMF emphasizes that this number is preliminary and expects it to keep growing,” NPR reports. “That's in part because there are some cases where it's not clear whether the officer contracted the virus on the job."

There are a few ways both news outlets show their biases in this story. Let’s start with Fox.

In the second paragraph, Fox News calls the number of deaths a “startling figure," which is an example of subjective qualifying adjectives. Qualifying adjectives are words that characterize or assign specific attributes to a noun — other examples include “sharp rise,” “troubling trend,” or “sinister warning.” When a journalist uses qualifying adjectives, they are suggesting a way for you to think about or interpret the issue, instead of just giving you the facts and letting you make judgment calls for yourself. You may agree that a rise is startling, or not. You may agree that a trend is troubling, or see it as a good thing. The point is that the use of adjectives is largely subjective, and represents a viewpoint.

Fox News’ focus on percentage increase, rather than raw numbers that often paint a more temperate picture, also arguably results in some alarmism/sensationalism.

NPR mentions in its story that many police unions are against vaccine mandates. This represents slant, which is a type of media bias when journalists highlight, focus on, or play up one particular angle or piece of information. In this case, NPR wants you to connect COVID-19 line of duty deaths with officers’ unwillingness to be forced to be vaccinated.

“COVID-19 vaccines and boosters offer protection against severe illness and death, even from the highly transmissible omicron variant,” NPR writes. “Yet police departments and unions in cities across the country — including New York City, Chicago, Los Angeles, Seattle and Phoenix — have pushed back against mandates requiring vaccines for public employees, filing lawsuits and threatening resignation.”

AllSides offers a balanced newsfeed so that you can compare news stories from the left, center, and right, spot bias and think for yourself. Fox News and NPR’s stories about line of duty deaths offer just another example of how we see bias play out in the press — sometimes obviously, and sometimes subtly.