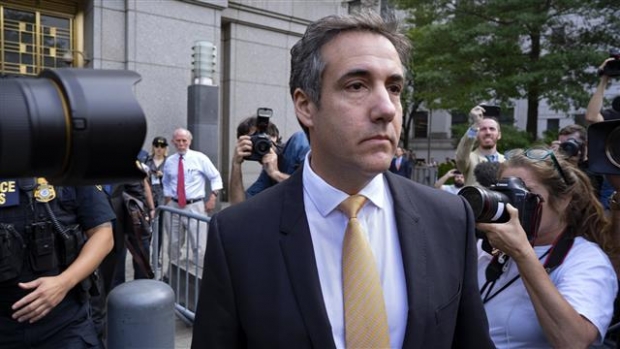 After President Trump's former campaign chairman Paul Manafort was convicted on eight counts of fraud and Trump's ex-lawyer Michael Cohen pleaded guilty to several criminal charges, media personalities are split as to how it will impact the president. Some argue that the developments implicate him as a co-conspirator, particularly after Cohen testified that then-candidate Trump ordered him to break campaign finance law, while others say the charges are not legally significant for the president and will certainly not warrant impeachment.
Check out some other big stories this week: 350 Newspapers Coordinate Editorials Critiquing Trump's Press Rhetoric, EPA Moves to Roll Back Obama-Era Regulations on Coal Power Plants, and David Hogg Plans to Run for Congress at 25, Expresses Support for Placing Age Limits on Politicians.
And take a look at our new blog post on bias by omission.
Snippets from the Center
Michael Cohen’s Plea Puts Trump Under Legal Scrutiny
Wall Street Journal
"Michael Cohen’s assertion that President Trump directed him to violate campaign-finance laws through payments to two women who claimed to have had affairs with Mr. Trump has thrust the president closer than ever to legal scrutiny.
...
The Manafort conviction was a victory for special counsel Robert Mueller, who is investigating Russian interference in the 2016 election and whether the Trump campaign colluded with the Kremlin, which both deny. The conviction may give Mr. Mueller’s investigation a momentum boost, though none of the charges against Mr. Manafort related to the central questions in the investigation.
...
Rick Hasen, a professor of law at the University of California at Irvine who has been critical of Mr. Trump, said the admission by Mr. Cohen that Mr. Trump knew about the payment could amount to an 'impeachable offense.'
...
Legal experts cautioned that a campaign-finance case against Mr. Trump would be difficult to build, both because of questions about whether a president can be indicted and the proof needed to convince a jury of a 'knowing and willful' violation of the law."
Snippets from the Left
Manafort’s verdict and Cohen’s plea gave Trump his worst day of the Russia investigation so far
Washington Post
"Trump maintains that he had nothing to do with anything unsavory or illegal; Cohen just pleaded guilty to doing those things because Trump told him to. Cohen has already released some tapes that appear to back up his version of events. Now he has testified that it happened.
...
After Manafort’s conviction, Trump zeroed in on the fact that Manafort’s convictions didn’t involve his work with Trump or the allegations that the campaign colluded with Russia to win the election. 'It doesn’t involve me. … It’s a very sad thing. … This has absolutely nothing to do' with Russian collusion, he told reporters.
But what Trump isn’t acknowledging is that, in many ways, this trial was all about Russian collusion.
...
The more legal pressure there is on Manafort, the more pressure he’ll face from Mueller to sign a plea deal. Any plea deal would probably offer Manafort a reduced jail sentence in exchange for sharing what he knows about Trump and Russia connections."
Snippets from the Right
Trump likely safe after Cohen guilty plea, but Mueller report will be fodder for foes
Fox News Opinion
"First, it is unlikely Cohen has any information to offer Special Counsel Robert Mueller about allegations that Trump or his presidential campaign colluded with Russia to help Trump defeat Democratic candidate Hillary Clinton in the presidential race two years ago. If Cohen did have such information, his guilty plea on the campaign finance violations and other charges would likely have been delayed.
And second, Cohen’s claim that he engaged in shady dealings by doing Trump’s bidding in coordinating the payments to the two women will figure in Mueller’s eventual report to Congress on the Russia investigation. The Mueller report is likely to be seized upon by Trump opponents as grist for their drive to impeach the president if Democrats win a majority of U.S. House seats in the November midterm election.
...
So the ultimate outcome of the Mueller probe may be a classic Pyrrhic victory for Trump – a victory that comes at a very steep cost. There will be little if any evidence of any collusion between the Trump campaign and Kremlin actors. But the further reputational damage the Mueller report will leave may hurt the president with some of his soft supporters and motivate his opponents to attack him with greater ferocity."
Discover more on this topic on AllSides.
Politics, Russia, Michael Cohen, Paul Manafort, Donald Trump, Robert Mueller, Story Of The Week, News