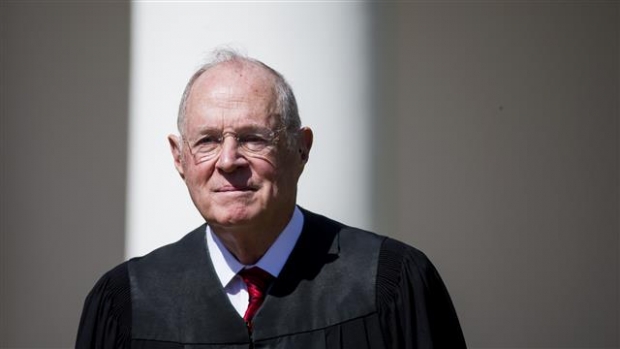 Justice Anthony Kennedy is set to retire from the Supreme Court after three decades of serving as a pivotal swing vote. Many on the Right celebrated the announcement, as President Trump will now have the opportunity to solidify the court's conservative bloc. Several outlets on the Left lamented the news, arguing that it will have repercussions for women and minorities.
Check out some other big stories this week: Supreme Court Rules Public Sector Unions Can't Force Members to Pay Dues, Supreme Court Upholds Trump Travel Ban, and Restaurant Refuses to Serve Sarah Sanders.
And take a look at our recent fact check article: What is Happening at the Border?
Snippets from the Center
Justice Anthony Kennedy Defined His Career at Center of Biggest Decisions
Wall Street Journal
"Anthony M. Kennedy, one of the Supreme Court’s most consequential modern-day justices and author of landmark rulings on gay rights, the death penalty and campaign finance, announced his retirement Wednesday, handing President Donald Trump a historic opportunity to reshape the court.
...
Justice Kennedy’s decision to step down is a seismic event in the nation’s capital, one certain to create an impassioned political battle over the Supreme Court.
The 81-year-old justice, a maverick conservative, spent much of his tenure situated at the ideological center of a court divided deeply into liberal and conservative camps on hot-button issues. His judicial leanings often left him in play for both sides, making him a pivotal figure in many of the court’s most important rulings.
Justice Kennedy’s departure gives Mr. Trump the chance to shift the court in a considerably more conservative direction—potentially for decades. More immediately, it sets the stage for what is likely to be the toughest fight over a court seat in recent memory, with congressional elections looming and liberals still angry over Republicans’ refusal to consider former President Barack Obama’s nominee for the most recent vacancy."
Snippets from the Left
Kennedy’s Retirement Will Have Huge Consequences for Minorities and Women
Mother Jones
"The retirement of Justice Anthony Kennedy could signal a dramatic turnaround in protections for minority groups. More than any Supreme Court retirement in decades, Kennedy’s exit could strike a mortal blow to abortion rights and other protections for groups that have been subject to discrimination.
For more than 40 years, abortion has been a constitutional right for women in the United States. That right has been repeatedly upheld because Kennedy, a Republican appointee, was uncomfortable with undoing the Supreme Court’s 1973 decision in Roe v. Wade—though he did limit it multiple times. But President Donald Trump will almost certainly nominate a justice hostile to abortion rights.
...
By no definition is Kennedy a liberal. He voted to strike down the Affordable Care Act and authored Citizens United, the 2010 decision that ushered in an era of enormous outside spending on elections...
Still, when it comes to abortion and racial discrimination, for years Kennedy provided intermittent relief from the aggressive vision of the court’s conservative justices. Without Kennedy, nothing is off the table now."
Snippets from the Right
Good Riddance, Justice Kennedy
National Review
"While it is true that Justice Anthony Kennedy was a disappointment to conservatives, the observation misses the point. Kennedy did not owe conservatives decisions that they liked. What all Americans deserved from him was the conscientious application of the law. That they did not get it is the true indictment of his time on the Supreme Court.
...
Most notoriously, he used an abortion case to opine that 'at the heart of liberty is the right to define one’s own concept of existence, of meaning, of the universe, and of the mystery of human life.' Nobody who ratified the Constitution or its relevant amendments thought in such terms. Nor would any of it be a legal defense against a parking ticket.
Kennedy’s lack of real guiding principles had the happy consequence that he sometimes voted for the right legal outcome — and even sometimes concurred in opinions that reached the right outcome for the right reasons. But we hope that his successor will have a much stronger sense of what fidelity to the law requires. And any plausible Trump nominee will be an improvement."
Discover more on this topic on AllSides.
Tags:
Supreme Court
Anthony Kennedy
Story of the Week
News