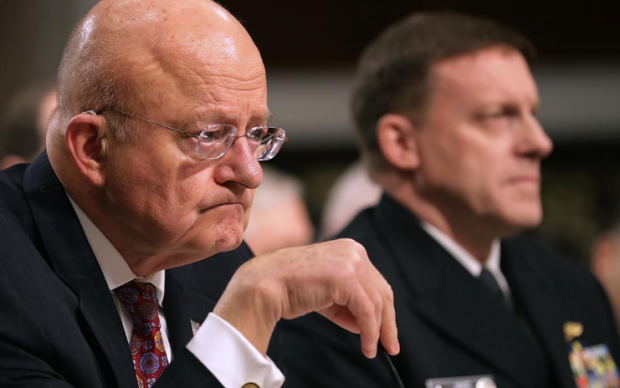 Though President-elect Trump has been telling people to "move on", the FBI and CIA are continuing to investigate if Russia had a role in hacking during the election. Obama was briefed today and Trump will be tomorrow. Trump has been outspoken in his feelings towards the intelligence community. Going forward, after Inauguration Day, it's unclear if continued investigations will take place or not.
From all of us at AllSides, we wish you a Happy New Year!
See other news featured by AllSides such as Obama Tries to Save Part of ACA, Trump Derides Intel Briefing, Congress Returns to DC and the latest AllSides News.
Snippets from the Left
Trump Aside, Intel Chief Insists Russia Meddled in Election
ABC News
"Brushing aside Donald Trump's dismissiveness, the nation's intelligence chief insisted Thursday that U.S. agencies are more confident than ever that Russia interfered in America's recent presidential election. And he called the former Cold War foe an 'existential threat' to the nation.
Did Russian hacking sway the results? Not likely, indicated James Clapper, the direction of national intelligence.
Asked about the possible effect of the disclosure of private information stolen by hackers, Clapper said, 'The intelligence community can't gauge the impact it had on the choices the electorate made.' But he also said Russian hacking 'did not change any vote tallies.'"
Snippets from the Right
What's inside? Obama gets report on Russia hacking, as Republicans spar on claims
Fox News
"The administration’s allegations of Russia-directed hacking of Democratic organizations during the 2016 U.S. elections – and punitive measures taken against Russian officials and agencies last week – continue to drive fierce debate in Washington, especially among Republicans.
Trump and his allies have cast doubt on the claims. The latest detail to raise questions is confirmation from the Democratic National Committee that the FBI did not examine their servers.
A spokesman confirmed to Fox News that 'the FBI never requested access to the DNC's computer servers,' though the DNC had several meetings with FBI and other officials during the investigation. BuzzFeed first reported the FBI did not inspect the servers before issuing their report."
Snippets from the Center
Clapper: Trump rhetoric on intel agencies alarming U.S. allies
Politico
"The president-elect on Friday will receive a briefing from Clapper, FBI Director James Comey and CIA Director John Brennan on an extensive report detailing Moscow's digital campaign to interfere with the 2016 presidential race.
The Obama administration has publicly accused the Kremlin of directing the computer attacks that hit the Democratic Party and Hillary Clinton campaign operatives. The digital thefts eventually led to a WikiLeaks dump of embarrassing internal emails that ousted top Democratic National Committee leaders and destabilized Clinton’s campaign in the final months.
President Barack Obama, who directed the intelligence community to create the report, is receiving his own briefing on Thursday."
Discover more on this topic on AllSides.
Story Of The Week, News, Russia, Hacking, CIA, FBI