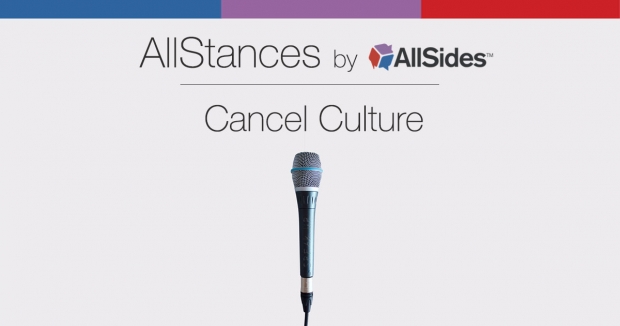 Is cancel culture a problem? Should there be social consequences for some views? Which views? Explore all perspectives and stances about cancel culture with AllStances™ by AllSides.

Cancel Culture Has Gone Too Far and Should End

People should not be fired, harassed, or mobbed for their views or speech.
See arguments »

Freedom of speech doesn't mean freedom from consequences. Some views are too harmful to allow in public.
See arguments »

Certain Views Should Warrant Cancellation — But Not Those Currently Being Canceled

There should be social consequences for some views, but not the ones currently deemed unacceptable.
See arguments »

Controversy has been raging in the United States around cancel culture, a practice in which institutions are pressured into sanctioning someone who has done or said something that is perceived to be offensive, objectionable, or harmful, either recently or in the past.

Being “canceled” takes many forms. Cancel culture most often involves someone being fired from a job or having their business ties cut, but it can also take the form of the boycotting of a brand, product, or person, the removal of advertising revenue, the removal of a TV show, book, or movie from streaming, broadcast or purchasing platforms, or career consequences such as “deplatforming,” such as disinviting speakers to events, preventing people from speaking at universities and conferences, or getting someone banned from social media.

Explore all stances and perspectives around cancel culture. Are we missing a stance or perspective? Email us!

Strong criticism doesn't amount to persecution or mean a threat to free speech.

Stance 2: Cancel Culture Has Gone Too Far and Should End

We can see clearly that cancel culture exists, and free speech is under attack. People should not be fired for their views; the answer to speech you don’t like is more speech.

There are already legal protections against truly harmful speech, such as yelling “fire” when there is none.

Freedom of speech doesn’t mean freedom from consequences. Some views are too harmful to allow in public.

Stance 4: Certain Views Should Warrant Cancellation — But Not Those That Are Currently Being Canceled

There should be social consequences for some views, but not the ones currently deemed unacceptable.

Cancel Culture, AllStances, Perspectives, Arguments, Pro Con, For And Against