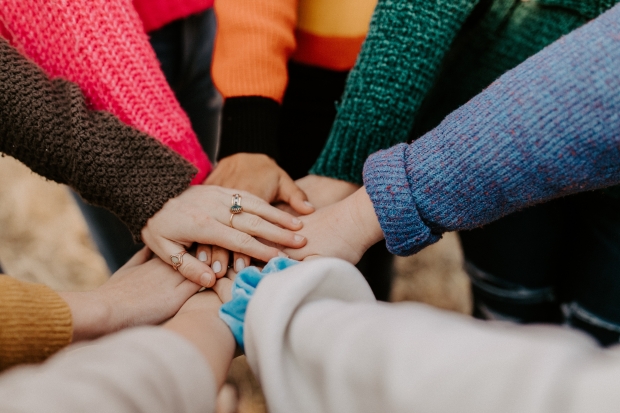 Political sides in the U.S. have the potential to see each other in highly negative ways. They can see each other as an out-group that is distant, stereotyped, lesser, and to be avoided, as I argued in my last article.

This article focuses on the corresponding solutions. Each of those negative perceptions has its own associated solution, with extensive support from social psychology. The solutions involve highlighting commonality between groups, uniqueness and elevation of the other side, and showing successful togetherness like collaboration and friendships. These words can be summarized with the mnemonic “on CUE Together.”

Being “on CUE Together” invokes Lincoln’s first inaugural address. Lincoln spoke of a “chorus of the Union.” We each have our own voices and be our own individuals, but we also can have a goal as a country to be harmonious and united enough to “sing” together.

Each of these “solution categories”– commonality, uniqueness, elevation, and togetherness – represents a broad messaging approach to improve emotions and attitudes toward the other political side. They can form the basis of many efforts to reduce polarization.

Revisiting the Hill and Valley Analogy to Identify Messaging Solutions

My last article provided an analogy of how the other political sides in the U.S. see each other. The sides are those who at least lean toward one or another political party, or those who support vs. oppose the current administration. Both “sides” account for 90% or more of American adults.

The analogy involves being on a hill and looking down on a distant out-group in a valley. That out-group would seem distant, they would be difficult to distinguish as individuals and thus stereotyped, they would be literally lower and potentially lesser, and they would often seem so far away and beneath the in-group that the default would be to avoid them.

On the surface, the situation seems fairly difficult to change. However, social psychology provides ideas for approaches that can bring the sides closer together.

First, some messages can give the people at the top of the hill the messaging equivalent of “binoculars.”

With binoculars, the other side is seemingly closer to us (commonality), and we can start seeing them as individuals rather than merely stereotypes (uniqueness).

Other messages can be the equivalent of the out-group from the valley walking up the hill onto a more equal plane (elevation). Finally, there are messages and stories that show positive interactions, especially once the groups feel closer together (togetherness).

This article is designed to identify the solution categories that can inform interventions to reduce polarization, often by improving emotions and attitudes toward the other side. However, there are ways to build from this article. Each solution category contains various sub-divisions of messages, which will be addressed in the next article. It is necessary to study how to best target, package, and convey various
messages. Finally, other messages outside this framework will likely be useful at addressing polarization, especially when the target audience feels disrespected or resentful.

Solution Categories 1 and 2: Commonality, and Uniqueness of Individuals on the Other Side

The first two messaging approaches would be the equivalent of handing people on the hill looking at the out-group “binoculars.” Currently, the out-group is seen as distant and as stereotypes. Yet with binoculars, the other group seems closer to us, and the individuality of the out-group members can become more apparent to us. These have strong support in the social psychology literatures

Commonality: Social psychology offers various means of bringing in-groups and out-groups together by emphasizing commonality. Emphasizing any overlapping identities is known as cross-categorization. Recognizing that we have shared overlapping identities is known as recategorization; original experiments on shared overarching (superordinate) identities essentially assumed that similarity of identity and experience would lead to us liking and feeling warmer about the other side. Similarity of
attitudes induces liking, a finding explored in Similarity / Attraction Theory, and these efforts should help to address the distortion known as “false polarization” or “misperceived polarization” when partisans assume the other side is more extreme and has more negative views about us than they actually do. Finally, there is also research on “shared human experiences.” For instance, thinking about similarities between favorite childhood memories or even painful childhood memories with members of
an out-group can lead to more uniting attitude change.

Uniqueness of individuals on the other side: Another way of bringing groups together is by seeing the other side more as individuals rather than members of their stereotyped group. Social psychology calls this method decategorization. Being given individuating information about multiple traits and identities of specific members of the other group leads to diminishing of stereotypical categories. The other side is now seen as more unique individuals. Research has shown improved emotions and attitudes toward out-groups when people become aware of these multiple identities. This is especially true among those who lack much “social identity complexity” and see a high degree of overlap between members of their various group identities.

Solution Category 3: Elevation of the Other Side
The next solution category involves ways of improving views of the other side so they are no longer “stupid or evil,” in the words of former American Enterprise Institute president Arthur Brooks. From the standpoint of the hill and valley analogy, it is more likely that having the out-group “walk” up the hill to a more elevated and equal plane will lead to depolarization. This approach will often involve highlighting positive individuals from the other side.

As 15 leading polarization researchers wrote in Science soon before the election, one of the most dangerous aspects of polarization is moralization, a tendency to view the other side as less moral.

Psychology shows that trying to prove to the in-group that they are as bad as the other side is unlikely to work; people do not respond well to persuasion that insults them. Instead, it can be more beneficial to “elevate” individuals from the other side who have shown good character or strong characteristics like intelligence. Jonathan Haidt has described a “moral emotion” of elevation in which people are moved by hearing stories of excellent human abilities or actions, such as charity or kindness. Ideally, these people will be seen as fairly typical and representative of their group, so the other side as a whole can be seen as frequently having these positive traits. These portrayals can be shown virtually to large audiences; social psychology researchers have identified the benefits of parasocial contact, seeing positive portrayals of the other side, such as on TV shows.

If the types of messaging above – commonality of groups, uniqueness of individuals, and elevation of the other side – are successful, then people are more likely to want to meet each other. The other side will seem closer and on a similar plane. Avoidance of the other side can become ambivalence or even interest in interacting with the other side. There is also room for messages to encourage this interaction, often by showing positive successes from collaboration, or various kinds of relationships such as friendships.

Psychology has a long history of showing that having shared or “superordinate” goals can lead to more collaboration between groups. There is also a long understanding of potential benefits of Contact Theory or the Contact Hypothesis, the finding that meeting across divides under certain conditions can improve emotions and attitudes toward the other side.

However, since Americans who support different parties often live in geographically distinct areas, in-person understanding of common goals or in-person contact can be challenging. Even contact over Zoom is time-consuming.

Luckily, superordinate goals are often relatively simple (e.g., two sides working together to accomplish a task), and social psychologists have shown that indirect contact can also be effective. They have identified benefits of vicarious contact, where people see others in their group having positive interactions with the other side. Thus, interventions using mass messaging should be able to highlight people across political divides successfully working together or having successful friendships and relationships.

The Mnemonic “On CUE Together” and Our “Chorus of the Union”

All of these various social psychology theories can be somewhat overwhelming. But hopefully the various mental tricks in this article can help.

Visually, the messaging strategies are first like giving someone binoculars to look at a group in a valley that seems far away and lacking individuality. With binoculars, they seem closer, and their individuality can become more apparent. Then the strategies involve having the other side walk up the valley toward a more equal plane. It is easier to interact with a group that already seems closer and more similar.

A mnemonic can also help: with the right approaches and messaging, America can be “on CUE Together.” Once again, this mnemonic stands for commonality of groups, uniqueness of individuals, elevation of the other side, and togetherness.

This mnemonic invokes Lincoln’s first inaugural address and its phrase “chorus of the union.” A chorus must begin on cue, together. In that speech, Lincoln’s last line was as follows:

“The mystic chords of memory, stretching from every battlefield and patriot grave to every living heart and hearthstone all over this broad land, will yet swell the chorus of the Union, when again touched, as surely they will be, by the better angels of our nature.” (emphasis added)

In a chorus, we each have our own voices and bring our own uniqueness, but we come together as one. This is much the same attitude as I expressed with my metaphor of America as a chili bowl, that America is made of identifiably unique ingredients, but also has a common sauce, a collective identity that brings it together in a singular dish.

A chorus ideally would be perfectly harmonious, but we know that many choruses also have their dissonance and problems. America is not going to be the Mormon Tabernacle Choir or the Brooklyn Tabernacle Choir. Yet we can have some shared goals and successes working together. There can be periods or at least glimmers of harmony. We can improve together. We can work together. And even the least talented of choruses can be trained to start on cue, together.

Besides, we do not want perfect harmony. We want there to be some dissonance and tension. We simply do not want the chorus to lose any sense of harmony and possibly even fall apart.

In the next article, I explore more details of each of these umbrella solution categories of “on CUE Together”: commonality of groups, uniqueness and elevation of the other side, and togetherness.