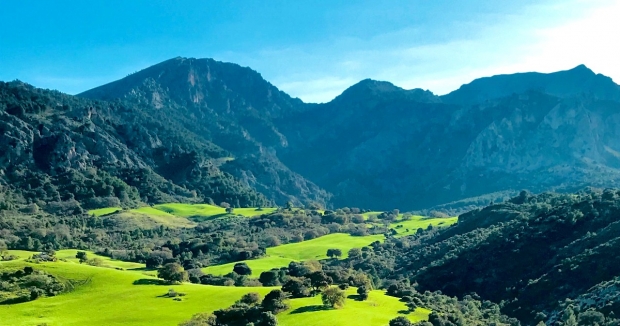 What happens if animosity grows toward those in the other political party? What are negative ways we can feel about any group that is not our own?

These are not just academic questions, but they are important to answer in order to figure out how to reduce political polarization.

This article draws from social psychology to argue that when emotions between groups worsen, one impact is that it is like our group is on a hill, watching another group in a deep valley. This kind of animosity is far from inevitable, but when it does happen, the other group in the valley far below is the “out-group.” The out-group seems distant, lacks individuality in a way that can lead to stereotyping, and literally seems lower and lesser than us. It often feels like too much of a burden to try to productively interact with them, and we often avoid them.

To summarize them quickly, the out-group in this case is distant, stereotyped, lesser, and to be avoided. [1]

The Hill and Valley Visual for Out-Groups: They are Distant, Stereotyped, Lesser, and to be Avoided

Psychologists have documented many negative emotions, attitudes, and dynamics between people seen as an in-group and an out-group.

These are not inevitable between any two groups. Two groups can be different but feel quite warmly toward each other.

Yet when emotions and attitudes worsen between two groups, similar tendencies emerge. It can be difficult to keep all the potential negativity toward out-groups in mind. I think it can be helpful to visualize a situation that can highlight certain emotions and attitudes toward the out-group. In general, it feels that there is greater distance between the groups, which can be visualized as a kind of horizontal
separation, and the other group seems lesser, which can be visualized as a vertical separation.

The horizontal and vertical separation can combine into a single image. Imagine being part of a group, looking down from the top of a hill toward a different group in a valley far below.

There are negative perceptions about the other side that can start to develop. They seem distant, we perceive them as stereotypes rather than individuals, and they are literally lower than us. Interaction seems tiring or difficult, and we can start avoiding those interactions.

Just before the election, 15 of the leading polarization researchers wrote an article in Science on political sectarianism in America. They highlighted three similar problems: othering, moralization, and aversion. Othering is very similar to distant and stereotyped. Moralization emphasizes the immorality of the other side; lesser also concerns their immorality, while including other deficiencies, such as seeing the other side as less intelligent. Finally, aversion is similar to avoiding, but also adds a negative emotional
component.

Future work should address feeling at the bottom of the hill. Yet this article will focus on feeling at the top of the hill, seemingly looking down at the other group that is distant, stereotyped, lesser, and to be avoided.

Defining In-group and Out-group in U.S. Politics: Mainly Political Parties, or Support for the President

In the context of politics, researchers care about when these emotions and attitudes worsen, a situation they have called affective polarization, which can be simplified to the increasing animosity between political groups.[3] Affective polarization in politics increases the likelihood of seeing the other side as an enemy, wanting to win at all costs, and putting our democratic republic and even physical safety at risk.

A related but slightly different in-group and out-group involves supporters of the current administration and those who oppose the administration. These groups also encompass the vast majority of American adults. Well over 90% of adults approved or disapproved of former Presidents Obama and Trump.

It is true that these groups are not fixed, and there could be other divisions such as liberals vs. conservatives. However, most Americans stay in their parties, or keep leaning toward them. An analysis around the time of the 2016 election showed that about 80% of adults never left their political party over a 15-month period, about half of those who left briefly returned to their original party. In terms of the administration, approval ratings for Obama and Trump have been remarkably stable, suggesting relatively few people changing their views on recent presidents.

Ideology does play a role in politics, but researchers increasingly find that the role is somewhat limited. Political Science professor Liliana Mason has studied this issue, as she has written in her book Uncivil Agreement. There is a surprisingly weak relationship between how conservative or liberal people say they are, and how conservative or liberal their political preferences actually are. As Ezra Klein summarized her work in Why We’re Polarized, people are loyal to the groups themselves, not necessarily the content of the ideology. We feel strongly about the groups we belong to, but most people do not endlessly delve into various policy topics to create a robust ideological worldview.

The Hill and Valley Visual is Highly Relevant to U.S. Political Polarization

The U.S. today is highly affectively polarized between political parties and those who support or oppose the president.

Each of the terms stemming from the hill and valley visual directly corresponds to what is seen with U.S. political polarization today. Each side sees itself on a hill, looking down at a distant, stereotyped, and lesser group that often should be avoided.

Distant: We overestimate differences between political parties in the U.S. today. We overestimate differences in terms of political beliefs, and incorrectly sense that those in the other political party feel worse about us than they actually do. Republicans and Democrats also tend to vastly overestimate the presence of distinctive sub-groups on the other side (e.g., black Democrats, wealthy Republicans). These
tendencies are either called false polarization or "misperceived polarization.” While they also overestimate many sub-groups on their own side, it is not by as much.

Lesser: Much of the field of moral psychology concerns a sense of righteousness that our group is more morally right, famously described in Jonathan Haidt’s book The Righteous Mind. Former president of the ideologically conservative American Enterprise Institute Arthur Brooks put feelings between Democrats and Republicans bluntly, saying that people view those in the other political party today as "stupid or evil.” In September 2019, Pew found that more than half of Republicans believed Democrats were immoral, and nearly half of Democrats said the same about Republicans. More than a third of each party considered the other side “unintelligent.” There is also a substantial moral component to the other potential in-group / out-group dynamic, support or opposition to the current administration. Right before the 2016 election, about three-in-five Democrats said they would have a “hard time” respecting someone supporting then-candidate Donald Trump. Two-in-five Republicans said the same about Hillary Clinton supporters.

Avoided: A key emotion that I am very concerned about with affective polarization is loathing, and we tend to avoid those we loathe or nearly loathe. Cross-partisan friendships exist, but they are not extremely common: In 2016, Pew found that only a third of Republicans and only about a fourth of Democrats had at least “some” friends who supported the other candidate. Unsurprisingly, those living near more people in their own party had fewer cross-partisan friendships.

On the whole, U.S. politics strongly corresponds to the hill and valley analogy. Partisans can see the other side in the valley as distant, stereotyped, and lesser, and tend to avoid each other.

Yet the rub is the vast majority of us are partisans. We generally support one party or another, or approve or disapprove of administrations and politicians.

The challenges presented here are problematic and difficult, but not insurmountable. Just as there are four issues between groups—with the other side seen as distant, stereotyped, lesser, and to be avoided—there are four main corresponding solutions. My next article will discuss them.

[1] For those who like mnemonics and computers, it is possible to think about a phrase “DSL – Avoid” to remember these words. In this case, DSL refers to “digital subscriber line,” a high-speed internet connection. Having strong communication and connection is important to depolarization. However, there are faster internet options that can allow for even smoother communication. Thus, one could remember “DSL – avoid it” for the out-group issues of “distant, stereotyped, lesser, and to be avoided.”
[2] A previous article of mine also attempted to answer a similar question. That article concluded that those in American political parties increasing feel emotions approaching or including loathing, resentment, and distrust. This article is most relevant to loathing, although it can also correspond to distrust. Loathing is a general emotion, and it is difficult to develop messaging that addresses a broad emotion like that. This article identifies more specific details about the emotions and attitudes between groups, eventually providing more clear-cut approaches for reversing political polarization.
[3] The definition of affective polarization from a technical standpoint is “the divide between the positive feelings of partisans toward the political party they identify with and their negative feelings toward the party they do not.” However, this can be hard to absorb quickly. Additionally, one way to mathematically reduce affective polarization worsening attitudes of partisans toward their own party – is unlikely to be particularly possible or helpful at maintaining stability of the country. These issues suggest that it is simpler to explain the problem in a one-sided way as increasing partisan animosity. Thus, the goal can either be described in negative terms (reducing partisan animosity), or as a positive (increasing positive feelings toward the other party).