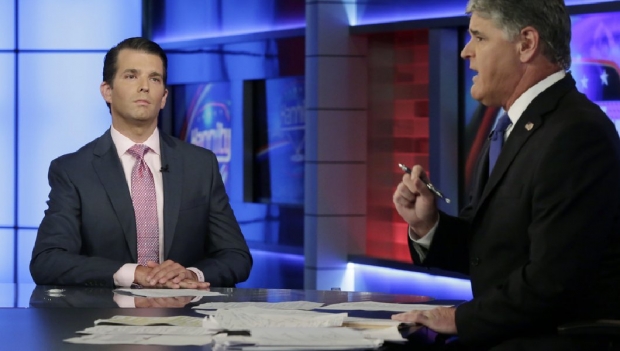 News broke this week that Donald Trump Jr. had contact with a Russian lawyer during the 2016 presidential election allegedly to receive opposition research on the Clinton campaign.Don Jr. released his email string to show the full extent of the communication and maintains that the "Russia hysteria" has been blown out of proportion by the press. It is unclear at the time what effect this will have on the ongoing Russia investigation, although there is talk of having Don appear before the Congressional Investigation Committee.
See more news on this story featured on AllSides such as NY Times Versus Donald Trump Jr., POTUS Defends His Son, Don Jr. Appears on Hannity and the latest AllSides News.
Snippets from the Left
Trump’s Son Met With Russian Lawyer After Being Promised Damaging Information on Clinton
New York Times
"The meeting — at Trump Tower on June 9, 2016, two weeks after Donald J. Trump clinched the Republican nomination — points to the central question in federal investigations of the Kremlin’s meddling in the presidential election: whether the Trump campaign colluded with the Russians. The accounts of the meeting represent the first public indication that at least some in the campaign were willing to accept Russian help.
While President Trump has been dogged by revelations of undisclosed meetings between his associates and the Russians, the episode at Trump Tower is the first such confirmed private meeting involving his inner circle during the campaign — as well as the first one known to have included his eldest son. It came at an inflection point in the campaign, when Donald Trump Jr., who served as an adviser and a surrogate, was ascendant and Mr. Manafort was consolidating power.
It is unclear whether the Russian lawyer, Natalia Veselnitskaya, actually produced the promised compromising information about Mrs. Clinton. But the people interviewed by The Times about the meeting said the expectation was that she would do so."
Snippets from the Right
Donald Trump Jr. says Russian lawyer claimed Clinton campaign collusion
Washington Times
"When the New York Times first reported the meeting Saturday, the younger Mr. Trump issued a statement saying the meeting was focused mainly on a discontinued program for U.S. adoptions of Russian children.
He issued a new statement Sunday, acknowledging the meeting was set up by an acquaintance he knew from the 2013 Miss Universe pageant in Moscow who said the lawyer might have information helpful to the Trump campaign.
The meeting in June 2016 with a lawyer with Kremlin ties, who was later identified as Natalia Veselnitskaya, was also attended by Mr. Trump’s son-in-law and top advisor Jared Kushner and Trump campaign chairman Paul J. Manafort.
The younger Mr. Trump said that during the meeting Ms. Vesenlantskaya claimed to have information that “individuals connected to Russia were funding the Democratic National Committee” and supporting Clinton.
'No details or supporting information was provided or even offered,' the younger Mr. Trump said in a statement. 'It quickly became clear that she had no meaningful information.'
...
Mark Corallo, a spokesman for Trump’s legal team, said the president was 'not aware of and did not attend the meeting.'"
Snippets from the Center
Trump Son Admits To Meeting Russian Lawyer With Offer Of 'Helpful' Info For Campaign
NPR
"In a statement provided to NPR by the Trump Organization, the younger Trump confirmed the meeting in June 2016, but claimed the lawyer provided no useful information and eventually turned the subject toward policies on Russian adoption that had been curtailed in response to U.S. sanctions:
'I was asked to have a meeting by an acquaintance I knew from the 2013 Miss Universe pageant with an individual who I was told might have information helpful to the campaign. I was not told her name prior to the meeting. I asked Jared and Paul to attend, but told them nothing of the substance. We had a meeting in June 2016. After pleasantries were exchanged, the woman stated that she had information that individuals connected to Russia were funding the Democratic National Committee and supporting Ms. Clinton. Her statements were vague, ambiguous and made no sense. No details or supporting information was provided or even offered. It quickly became clear that she had no meaningful information. She then changed subjects and began discussing the adoption of Russian children and mentioned the Magnitsky Act. It became clear to me that this was the true agenda all along and that the claims of potentially helpful information were a pretext for the meeting. I interrupted and advised her that my father was not an elected official, but rather a private citizen, and that her comments and concerns were better addressed if and when he held public office. The meeting lasted approximately 20 to 30 minutes. As it ended, my acquaintance apologized for taking up our time. That was the end of it and there was no further contact or follow-up of any kind. My father knew nothing of the meeting or these events.'"
Discover more on this topic on AllSides.
News, Story Of The Week, Donald Trump Jr., Russia, Emails