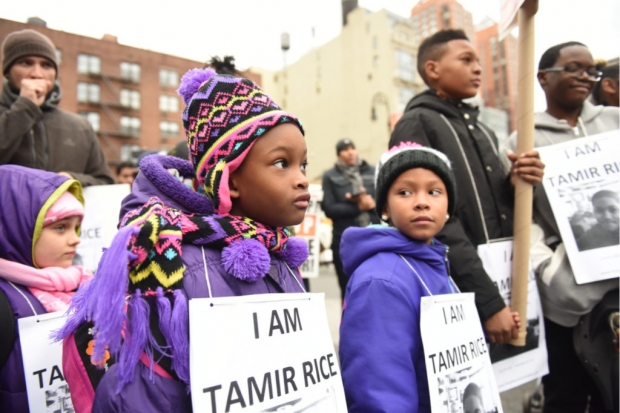 This past December, before the world changed but at a moment when most of the problems that led us here were in full view, I was invited to speak at an event organized by Bishop Omar Jawar of Dallas, Texas, in front of the black church community.

Dallas is a city that has known racial heartache. We’re all feeling something like this today. In these highlights I tried to give voice to the spirit of nonviolence by which we might redeem the heart of America – and build together across our troubled divides.

Many of us are looking at the reality of race relations in America today with new eyes. We are listening to those giving voice to the pain of the black experience with new ears. In a moment where every possible calamity has seemed to befall America at once, the familiar tragedy of the historic relationship between law enforcement and the black community has suddenly spilled forth among all other issues as the great moral reckoning of our moment. Who among us saw this coming? Yet all of American history has led us here.

Black lives matter. But black lives are American lives. Like all American peoples, the African-American journey is made up of not one story but many. Understanding the streams of these experiences can help us to understand the journey of a people whose aspirations lie at the heart of our path to a more perfect union.

I have lived a version of the black experience in America. And my life has been blessed. I have an African-American mother from Los Angeles, where I was raised and reside. My father is a white man from Tennessee. Our household was biracial. The suburban area we lived in (Culver City, CA) was multicultural. Race fully decorated my experience growing up black in America, but did not fully define it.

I trusted the institutions that surrounded me. Why? Because, white or otherwise, they seemed to made up of people who cared. Politicians, teachers, law enforcement – the America I knew as a boy was an America akin to the vision of this country that Martin Luther King, Jr. died for. An America where only character matters, where opportunities were equal, in which brother and sisterhood prevailed.

Yet only several miles from me, in South-Central Los Angeles where my cousins on my mother’s side lived and played, a very different American experience was taking shape.

In urban centers across America, where African-Americans have been shepherded over generations by desperate migratory escapes from poverty and racist elements in the south only to lead to over concentration in under-served areas constricted by discriminatory real estate and housing policies in the west and north, black Americans have lived lives not seemingly set in full view of the American dream.

From Harlem to Detroit to Minneapolis, Chicago and L.A. one finds stories of black families and individuals overcoming poverty and disparities to build rich and meaningful lives enjoying the full promise of America.

But the great arc of this story rises over slavery, terrorism in the Jim Crow south, neglect and oppression in America’s growing urban centers, the tumult of the Civil Rights Movement, the slaying of the African American communities foremost leaders, the expansion of the federal government in the lives of the black community beginning in ’60’s, the explosion of drugs and gangs in American streets in the 70’s and 80’s, the swelling of a massive and at times corrupt police response to genuine public concerns over law and order… and that takes us to the early 1990’s, when I start to remember.

My father has told me that the most frightening moment of his life came during the Los Angeles riots in 1992, exploding in the aftermath of the police beating of Rodney King.

We lived in Culver City – generally a peaceful area. But the unrest was spreading beyond its epicenter in South-Central. My mother insisted on going to work that morning, despite this. As she pulled away, so my father tells me, he had the sinking feeling that he might never see her again. “My God,” he thought. “Why did I let her go?”

I was five and a half years old at the time. I have a vague memory of something being wrong that day. Unease filled the air. But my mother came home. She had had a fright, I later learned. But all was well in my house. And life would continue.

15 miles away however, in the Jordan Downs projects of Watts, CA, the woman I would marry 15 years later was a little girl trapped in a war zone.

She remembers the unending gunfire. The explosions. The sirens and the impotent efforts of authorities to gain control as a community erupted in outrage against the brutality of a police department viewed as an occupying force with innocent people caught in the crossfire. With her waking eyes she saw hatred, violence and death consume her community.

And yet our stories would meet. My wife has seen more death over the course of her life than many soldiers who have served in Iraq and Afghanistan. She has seen poverty, the ambivalence of overworked social-workers, failure in the education system, and yes, the corruption of the police.

But she has also known police officers who have been kind, constructive members of her community. She would serve in the United States military and made friendships that will last a lifetime. She and I have raised a family in black Los Angeles where we have known LAPD officers whose passion it is to serve everyone in our community and who have dedicated themselves to restoring the trust that had been lost between members of our community and the police.

There are similar stories across America. There are similar stories in Minneapolis, where Braver Angels own Bill Doherty has developed the Police and Black Men Project which has successfully cultivated relationships of trust and collaboration between these Americans for three years. This is not the work that social media allows to go viral, sadly. But progress is real, and a part of the story.

And still, when my wife sees the death of George Floyd, and the violence that has followed, what she sees as a black woman is not the exceptional. What she bears witness to is the familiar.

Most black lives unfold somewhere between my wife’s story and my own. Neither the reality of her life or mine presupposes the answer to every question of policy and social justice in America. We need a political culture in America with the thoughtfulness to engage the true complexity of black life, police relationships, race and racism in our society. It is a culture that requires black and white, left and right – and everyone in between.

The beloved community demands it. It is achievable. The vision of King’s promised land grows on the horizon.

It is not so far as it seems.

John Wood Jr. is a national leader for Braver Angels, a former nominee for congress, former Vice-Chairman of the Republican Party of Los Angeles County, musical artist and a noted writer and speaker on subjects including racial and political reconciliation. He has a Center bias.