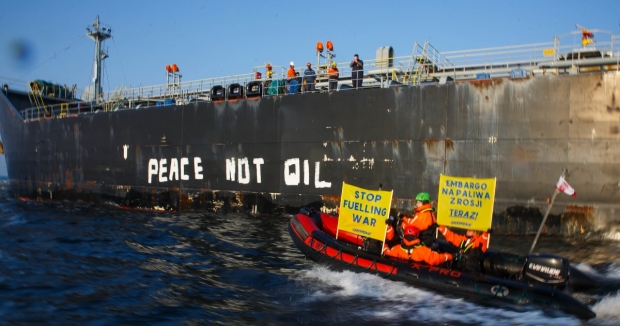 March 25th 2022, Bay of Gdańsk, Poland: Greenpeace activists from Poland painted "PEACE NOT OIL" on the side of a tanker transporting oil from Russia to Poland.

When all the niceties on both sides of the argument are stripped away, that admittedly unfair formulation is what stands at the core of Joe Biden’s most vexing policy and political challenge. From the beginning of his presidential candidacy, Biden has stressed his commitment to fighting climate change, often facing conservable skepticism from his party’s progressive base. Through his first year in office, as the pandemic-driven recession required him to balance economic and environmental priorities, many Democratic activists became increasingly dissatisfied with what they felt was his insufficient commitment to the transition from fossil fuels to renewable energy. Combined with his lack of progress on other issues such as voting rights, immigration and police reform, Biden entered this midterm election year in dire need of something that could motivate Democratic loyalists.

Putin was clearly in no mood to cooperate. His invasion of Ukraine has disrupted the world order in all sorts of ways that create difficult challenges for Biden and his allies, but the war has created an especially complicated domestic political predicament for Biden on his administration’s environmental policy. Rising inflation was undermining the American economic recovery even before Putin sent his troops into Ukraine, and now gasoline prices are skyrocketing even further. The political impact has been to send drivers – and voters – into a panic-induced sticker shock when filling their gas tanks and has sent Biden’s staff scrambling for solutions on how to bring prices back under control.

Biden has been unable to persuade most Western European countries to join a full embargo on Russian oil and natural gas and has also been unsuccessful in convincing Saudi Arabia and most other oil-producing nations in the Persian Gulf to increase their output. Meanwhile, governors and members of Congress in his country have debated a range of proposals for gas tax suspensions, rebates and other short-term measures with limited success. As a result, last week Biden announced a plan to draw down U.S. oil reserves to unprecedented levels, even while admitting that the move was unlikely to have a significant impact at the pump.

But all of these efforts presume that increased energy supply – and increased fossil fuel usage – is the Administration’s primary goal, which has enraged climate activists already chafing at the pace of Biden’s agenda. White House National Climate Advisor Gina McCarthy admitted recently that Europe’s energy needs have been prioritized over the Administration’s climate agenda. “We’re actually not balancing right now.”

Biden and McCarthy both have made it clear that the current crisis does not obscure the need for more aggressive efforts to combat climate change over the long term. The president still wants to accelerate the shift away from fossil fuels and somehow phase out the use of natural gas in power plants by 2035. And even while Biden pushes to increase energy supplies, he has still harshly criticized fossil fuel companies for prioritizing their profits (which does not create much of an incentive for them to respond to his call for more production.) This is not a “drill, baby drill” president by any stretch of the imagination.

But polling continues to show a marked enthusiasm gap between the two parties for this fall’s elections, and the Republican advantage on this front seems to be growing. The climate change warriors who grudgingly signed on to Biden’s campaign during the 2020 primary as the best way to prevent Donald Trump’s re-election don’t think the president is fighting for their goals, and all the conversation in the world about Joe Manchin, Kyrsten Sinema and the challenges of an evenly divided Senate are not changing their minds. Unless they hear something that stirs their hearts, they appear to be content to sit home in November.

But the photos of dead civilians lining the streets of Bucha tear at our hearts too, and offer a graphic reminder of the reason the fight for Ukraine is so important. Biden wants to win the war and save the planet, but right now, many members of his own party appear unwilling to allow him to accomplish those goals in that order.