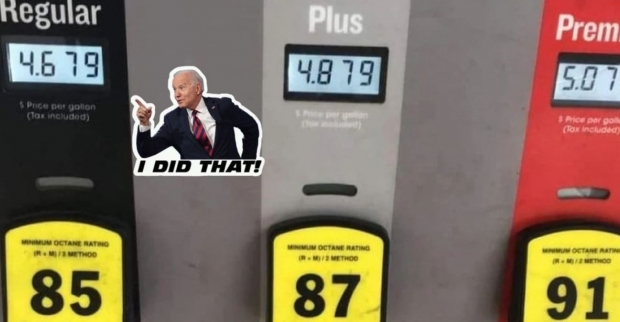 Stickers blaming Biden for high gas prices have been seen across the country. SOURCE: ENLIGHTCREATION VIA ETSY

Americans are now wearing pins with the colors of the Ukraine flag. Like good patriots, we’ve poured out our bottles of Russian vodka. And we grit our teeth without complaining when we’re filling our gas tanks.

For the first few weeks of the war, rooting for those plucky Ukrainians as they stand up to Voldemort Vladimir Putin has been fairly painless for most Americans. But it’s about to get a lot more difficult.

Continued sanctions against Russian oil exports mean that gasoline prices are only going to get higher in the weeks and months ahead, and the cost of transportation-dependent products like food, furniture and construction are going to increase too. The cost of our summer vacations, whether by plane, train, or automobile, will be noticeably more expensive too. Americans are rallying around the flag in the first days of the war — more than 70% say they are willing to pay higher prices for gasoline to support Ukraine’s war efforts — but Putin is counting on those numbers dropping steadily as the economic impact continues. It’s been said that a president is never more popular than on the first day or a war: Joe Biden is gambling that the nation’s willingness to pay more at the pump will sustain over a longer time period.

The most obvious way to keep energy prices under control in the short run is to expand supply. Even though only 3% of U.S. oil comes from Russia, prices are set on the world market and so removing that much gasoline from the global supply chain is going to drive costs upward unless alternative sources can be identified. To pull that off, Biden’s Administration is exploring a range of policy options that will test the depth of the president’s supporters to him.

Biden has already called for releasing oil from the nation’s reserves and his advisors are reaching out to the largest fossil fuel companies to encourage them to increase their production. Both steps to increase supply would relieve the pressure on gasoline prices, but would also represent major steps back in efforts to shift the country to alternative energy sources. The last thing Biden needs is disillusioned Democratic loyalists staying home from the polls this November because they don’t see the president maintain his commitment to renewable energy.

Even before the war began, rising inflation had become Biden’s biggest political obstacle heading into the midterm elections. The swing voters who Democratic candidates need to preserve their congressional majorities are telling pollsters that while they are concerned about climate change, inflation is a much more urgent worry to them. And Biden needs to find a way to relieve those anxieties even if it means easing off on his planned shift away from fossil fuels to solar and wind power. He and his advisors still believe that alternative energy sources represent the future, but green technology is still years away from being able to meet the nation’s energy needs. And Biden no longer has the luxury of waiting.

The even faster way to bring down gas prices is to cut the gas tax, and Biden is under pressure from a growing number of fellow Democratic officeholders to do just that. But once again, his environmentally-focused constituency knows that lower prices means greater consumption, and they are very disturbed by the idea of government policy that encourages more driving rather than less.

These policy choices are just as complicated on the world stage. If Russia’s oil is no longer available, there are plenty of other countries who can fill that gap for Western consumers. But dealing with those countries will require tradeoffs too, as human rights violations in places such as Venezuela, Saudi Arabia and Iran have been obstacles to greater economic engagement. But Biden Administration officials have already been in touch with Venezuela’s leaders, negotiations over the Iranian nuclear agreement are progressing, and Biden’s past criticisms of Saudi Crown Prince Mohammed bin Salman are quietly being downplayed. As the U.S. learned during the Cold War, human rights are an important consideration in a nation’s foreign policy, but rarely the only one.

An even bigger threat than gasoline prices and inflation is the geopolitical threat posed by Putin and Russia. If winning these fights requires scaling down efforts against climate change and human rights violations, then Biden’s political balancing act is going to require extraordinary skill from the president – and equally extraordinary patience from his base.