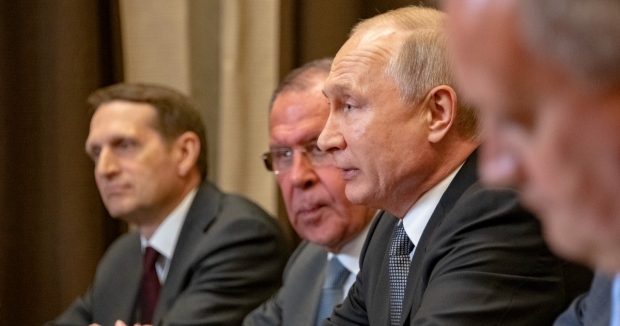 This week was going to be Joe Biden’s mulligan.

The president’s first State of the Union speech could help him turn the page from a difficult first year in office to a more purposeful focus on the nation’s economic challenges. Biden could talk about building infrastructure, fighting inflation, and rescuing some portion of his Build Back Better social spending and climate change plan, with maybe a low-key victory lap on Covid-related progress. Best of all, he’d be able to rally an unmotivated Democratic base by invoking his history-making nomination of the first Black woman to the U.S. Supreme Court in the nation’s history.

Instead, Hurricane Putin hit, with the intensity of a Category 5 geopolitical storm. When the Russian president ordered his nation’s troops into Ukraine last week, he not only upset the international world order that had been in place since the end of WWII, but he also completely overturned the carefully laid plans that the White House had been finalizing for Biden’s re-coming out party.

Biden will still talk about his domestic policy agenda in his Tuesday speech, of course. But it will receive only a tiny fraction of the public and media attention that it would have drawn during peacetime. He will still lavish praise on Judge Ketanji Brown Jackson, who will make history not only for the important demographic breakthrough she represents but because her confirmation will attract less news coverage for any nominee to the High Court since the invention of television. The silver lining for Biden is that minority voters and other progressives will still be energized by Jackson’s selection: they just won’t hear nearly as much about it.

Similarly, Biden will devote considerable time to his economic policy objectives, and they will still be the subject of extensive consideration and debate on Capitol Hill over the next several months. But the American people’s interest in these policies will be much smaller as well, given the understandable distraction of war in Eastern Europe for the foreseeable future. Even if Russia pulls back from its aggressions in the relatively short term, the window before November’s midterm elections is rapidly closing. Every day that Americans are watching the violence in Ukraine is a day that they are not reconsidering their options in congressional races. Given the deficit that Democrats are currently facing in the polls, the less time they have to change voters’ minds, the more challenging a task that is going to be. (This is not to say that Democrats can not maintain their House and Senate majorities, just that the competition for the public’s attention that Putin creates will make it much more difficult.)

The struggle to be heard over international military conflict is not the only added challenge that Biden and his party must consider. Even at a time of extremely low unemployment, consumers are extremely nervous about their economic prospects in the face of historically high inflation rates. Necessary sanctions imposed on Russia may or may not discourage Putin from further aggression, but they will almost certainly cause prices for gasoline, food and other necessities to rise even further for the duration of the war.

Biden will still realize some benefit from the rally-round-the-flag effect that all presidents receive at the beginning of a war. But polls show that Americans are not very enthusiastic about the U.S. playing a major role in Ukraine, and even less so when told that such involvement could result in higher gas prices. Putin understands that maintaining political support in a democracy for prolonged military conflict is not easy, and could decide that simply waiting out the West could be his best option. And even a decisive victory in Ukraine – whatever that looks like -- does not guarantee political benefits for Biden. The late George H.W. Bush, who won the first Iraq war and lost his re-election campaign shortly thereafter – could have attested to both the short memories and the domestic political priorities of most voters.

Biden’s midterm year has looked like an uphill fight from the beginning. Putin’s war now makes that challenge even steeper.