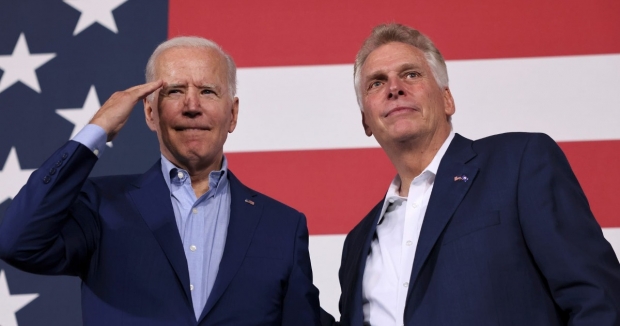 One of the most discouraging trends in contemporary American politics has been the almost complete disappearance of the political center. As both parties in Congress retreat further and further away from midfield toward their respective ideological end zones, the likelihood of Democrats and Republicans finding common ground from which to work has become vanishingly small. The same polarization now infects most state-level politics and government, where a similar scorched-earth mentality infects governors and legislators on the right and the left.

That’s why the final days of the campaign for governor in the Commonwealth of Virginia has been somewhat encouraging for those of us who lament the gradual devolution of our political process and who are being given at least some hope of the possible resurrection of the political center in our society. In case you haven’t noticed, the Virginia race this year has been the scene of a small outbreak of principled conduct.

The two candidates, former governor and longtime Democratic fundraiser Terry McAuliffe and wealthy Republican businessman Glenn Youngkin, are locked in a dead heat in most public opinion polls. But the most interesting and important aspect of the campaign to date is not the close margins or the inevitably increased invective, but rather the laudable efforts that both McAuliffe and Youngkin have made to distance themselves from the most extreme voices in each of their parties.

Not only did McAuliffe defeat more liberal opponents to win his party’s primary, but he has spent much of the fall castigating his fellow Democrats in Washington for their inability to pass President Biden’s legislative agenda. Youngkin, who won the GOP nomination over more conservative foes, has been attempting a much more delicate dance, as he tries to both distance himself from former President Trump without alienating Trump’s supporters. But regardless of who emerges victorious in the upcoming general election, Virginia’s next governor will be a leader who has been willing to reject their party’s orthodoxy on some occasions and who has frequently emphasized independence over lock-step partisanship.

Let’s not go overboard here. Neither McAuliffe nor Youngkin is the type of 20th century moderate that once populated the ranks of the two parties. McAuliffe’s ferocious attacks on Youngkin’s opposition to abortion and Youngkin’s equally vicious assaults on McAuliffe’s statements regarding public school curriculum are constant reminders that neither man is wasting much of their time on deference or decorum. But after first the Tea Party’s dominance of the GOP followed by Trump’s takeover, and given the increasing control that the emerging progressive caucus has achieved in the national Democratic party, it is reassuring to see the two candidates in the most important race in the country this year refusing to submit to their parties’ most demanding and uncompromising voices.

Since courage is not contagious, it’s unlikely that next year’s midterm elections will see an excess of either Republican or Democratic candidates who proclaim their independence from their parties’ bases. But while their numbers have shrunk, there are still principled centrists on both sides who could draw encouragement from the autonomy that McAuliffe and Youngkin have displayed this year and who may possibly choose to imitate it.

Biden promised in his campaign that he would work to restore bipartisanship to Washington, a task that is still far from accomplished. But enough voters saw the benefit in such an effort that he was rewarded with the presidency. Neither Youngkin nor McAuliffe has made such an ambitious pledge. But a rejection of mindless partisanship is almost as good as a pursuit of bipartisanship. And whichever of the two becomes governor, the citizens of Virginia will benefit from a leader who is willing to even occasionally prioritize the voters’ interests ahead of blind partisan loyalty.

It’s a mark of how poisonous our politics has become that the tentative steps toward individual thought and self-determination that McAuliffe and Youngkin have taken this year are so noteworthy. But it’s better to be a mile outside of hell heading out, and so let’s applaud these two men for reminding us that better and braver approaches are still possible. Only one of them will win the election, but both have already achieved some admirable success.