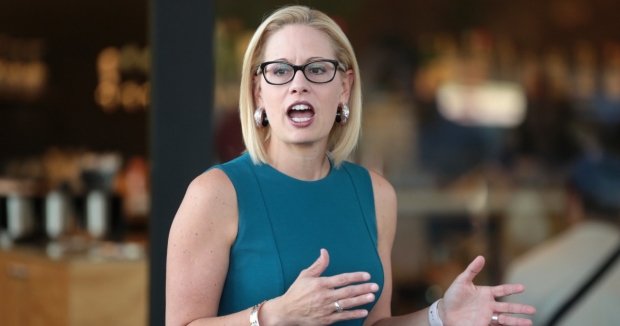 I’m still deciding what I think about Kyrsten Sinema.

The Arizona Democrat is a centrist on a political landscape that needs more of them.  She’s an unpredictable free spirit in a staid and polarized U.S. Senate that certainly benefits from her willingness to flout stylistic and partisan traditions. And she seems to be a workhorse rather than a showhorse, one of those rare politicians who digs deeply into policy details and eschews most news media opportunities.

On the other hand, it’s not entirely clear what her policy priorities and legislative goals might be. The Arizona mavericks who have preceded her in Congress over the years, Barry Goldwater and Morris Udall and John McCain, were quirky iconoclasts willing to flout convention and ignore party orthodoxy. But they used unconventional methods to achieve identifiable objectives. Sinema is definitely a fighter, but it’s often hard to tell exactly what she is fighting for.

But I have come to one very strong conclusion about Senator Sinema. She should be allowed to visit a public restroom in peace. I will admit that it never occurred to me before that such a statement would be controversial, but in recent days we’ve learned that a formidable portion of the electorate believes that following, interrupting or recording an elected official when she uses the toilet is an acceptable form of advocacy.

Sinema is a lecturer at Arizona State University, and when she left her classroom last week, a group of immigration reform advocates accompanied her to the door of a nearby women’s bathroom, a smaller number went inside with her, and at least one actually recorded her (thankfully through a closed door) while the Senator was inside one of the stalls. The activists were unapologetic, arguing that Sinema had not made herself available to meet with them under more conventional circumstances and that this was their only opportunity to try to convince her to support President Biden’s social spending and climate change bill as a way of accomplishing comprehensive immigration reform.

Biden himself was oddly dismissive of the incident, agreeing that such conduct was inappropriate before saying “it happens to everybody”. The president is correct that public protests have become increasingly confrontational – anyone who watched the riot at the U.S. Capitol last January or smaller violent uprisings on the margins of protests after George Floyd’s death the previous summer understands that. And it has become increasingly commonplace for local officeholders and even non-elected election officials across the country to face both threats of violence against them in their workforces and angry protests outside of their homes by dissatisfied constituents.

Angry voters from both the left and the right explain their belligerence by saying that they have no other way to have their voices heard. That’s not entirely true. The mechanism of voting in regular elections provides frequent opportunity to replace their elected representatives without threats, violence or harassment. But that requires a level of patience and a willingness to abide by election results even if they don’t come out the way we’d like.

The more immediate and combative approach has certain benefits: it’s cathartic for some to howl at the moon even if no one is listening, and it’s reassuring to be part of a group whose members are just as committed as they are to disruption and anarchy. Practically speaking, though, the likelihood of changing a target’s mind on the issue at hand is slim at best. Sinema is no more likely to vote for Biden’s legislation in its current form than Mitt Romney would have voted against Donald Trump’s impeachment after being harassed by Capitol protestors on his flight back to Utah on January 6. If anything, this type of aggression is more likely to cause a Sinema or Romney to dig in their heels in defiance rather than acquiesce.

More importantly, such behavior also makes politics even uglier, leaves the public square even less hospitable, and makes functioning democracy even more difficult to achieve. On a hyper-polarized landscape, collegiality and compromise are already painfully rare. Attempting to change an adversary’s mind through intimidation rather than persuasion creates additional obstacles to coherent governance and to civil society. Drawing the line at the bathroom door seems like an odd place to take a stand. But sometimes we choose the battle and sometimes it chooses us.