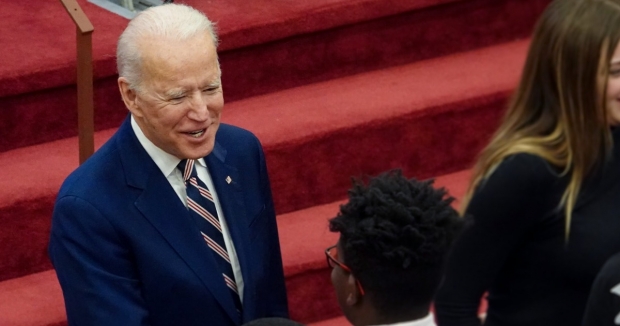 Joe Biden is a traditionalist caught in a transformational era. He’s doing his best to keep up, but sometimes the old-school politician gets in the way of his most ambitious progressive allies. His frequent references to Franklin Roosevelt and Lyndon Johnson allowed him to combine those two impulses advocating for the COVID-19 relief package, but there are challenges ahead on which the president and his party may have a more difficult time reconciling.

We’ve seen recent evidence of this tension in the rapidly intensifying debate over the Senate filibuster, as increasing numbers of restive Democrats are calling for the 60 vote requirement for bill passage to be abolished. Biden dodged that fight in the effort to pass the COVID-19 legislation by turning to the reconciliation process to temporarily lower the vote threshold for passage down to 51 votes. But reconciliation can only be used sparingly, and with bitter partisan fights over taxes, immigration, climate change and voting access stacking up, the pressure had been building on him to reverse his historic support for the filibuster.

So this week, Biden took a half-step in that direction. Rather than joining the call to eliminate filibuster altogether, Biden instead turned backward in time to instead suggest that the old-fashioned “talking filibuster”, in which a Senator had to remain on the floor for extended periods of time to forestall a vote. This tactic has been memorialized by Jimmy Stewart and Strom Thurmond, among others, and the presumption is that the Senate minority would utilize the filibuster much less frequently if it were that much more difficult to employ.

But even a return to this requirement would not eliminate the need for 60 votes to stop debate and force a vote, and a return to a talking filibuster would mean that no Senate business at all could take place until the standoff is resolved. (That’s why the Senate moved away from that approach to the current system in the 1970’s when the threshold to end debate was reduced from 67 votes to 60.)

Republican Senate Leader Mitch McConnell has threatened to dramatically slow down all Senate action if the filibuster is eliminated. He also offers a warning about how a GOP majority would use the same lower threshold to accomplish its own policy goals when the opportunity presented itself in the future. McConnell reminded us that this is what happened when the Democrat-controlled Senate lowered the threshold for confirmation of appellate judges during Barack Obama’s presidency to a 51 vote majority: the result was Republicans making the same change to confirm three of Donald Trump’s appointees to the U.S. Supreme Court. Democrats have begun making the case that the filibuster has become an obstacle to voting reform and climate change legislation, but Republicans would be able to move just as quickly on immigration, abortion, and gun policy the next time they control 51 vote

Biden has long supported the filibuster for just this reason. But he now sees his entire policy agenda at risk. With no good options, he has chosen a half-measure that would neither unclog the logjam or preserve Senate tradition. While it’s not clear if this compromise could win enough votes to enact the change, it’s easier to assume that a talking filibuster would make a great deal of difference.

A more intriguing idea that has been circulating would be the possibility of requiring all 41 of a bill’s opponents to remain on or near the Senate floor at all times, rather than one or two determined Senators being able to hold the chamber at a standstill. This would require every single resistor to cancel all non-floor obligations for the duration of the filibuster. One Senator can talk all night. A small number of them could maintain a filibuster for days. But convincing more than 40 members to forego all meetings, fundraisers, meals, personal and family time for an extended period would be much more difficult.

Of course the best way to break the gridlock is not to change rules but attitudes. As a candidate, Biden promised to work across party lines. After an initial meeting with ten Republican Senators on the COVID-19 bill, neither he or his advisors attempted any further contact and instead chose to pass the relief package through reconciliation. Perhaps another possibility for achieving policy goals could be making another effort to work with the other side. There’s never any guarantee of success, but if memory serves, negotiation and compromise have often been successful tools in the past.

Want to talk about this topic more? Join Dan for his weekly webinar “Politics In The Time of Coronavirus” on Tuesday mornings at 11 AM PST. You can register for it here. https://lawacth.force.com/LightningMemberPortal/s/lt-event?id=a1Y3h00000.... Or read more of Dan’s writing at: www.danschnurpolitics.com.