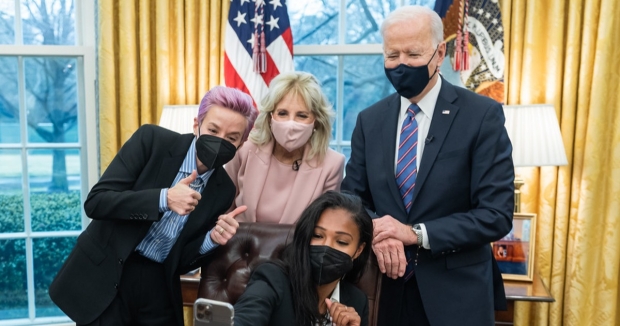 Joe Biden would not be the first president whose party lost Congressional seats in his first mid-term election. Nor would he be the first president to lose seats in Congress during his first midterms and then win re-election for himself two years later. But as Biden’s poll numbers continue to decline, nervous Democrats are worrying greatly about how their party can hold onto the White House in the face of what looks like an increasingly likely Donald Trump comeback bid in the not-too-distant future.

Many Democrats have already begun to talk in fatalistic terms about their chances of maintaining their majorities in Congress next year, but their greater concerns are about keeping the presidency in 2024. Biden’s age has exacerbated these worries, and despite the assurances of the president’s closest advisors, large numbers of Democrats are now wondering not only about Biden’s own potential vulnerabilities in a re-election campaign, but whether he will even seek a second term in office.

Questions about Biden’s potential successor have triggered another round of Democratic hand-wringing, as many party stalwarts (include some in the White House) have voiced skepticism about whether Vive President Kamala Harris would be up to the challenge of serving as her party’s standard-bearer if Biden did step aside. There is growing buzz in Washington that Transportation Secretary Pete Buttigieg would be a stronger candidate than Harris, and despite both Buttigieg’s and Harris’s efforts to discourage the speculation, these questions are likely to persist all the way to the 2024 Democratic convention and possibly beyond.

But the bigger challenge than the identity of the party’s nominee could very well be the large and growing divide between Democratic moderates and progressives. Biden was able to scotch-tape a coalition of the two factions in 2020 largely because of widespread fears among party regulars about the prospect of a Trump re-election. But just over a year later, progressives are restless and polls show that young people and minority voters are losing their enthusiasm for him.

The intra-party tensions will grow even more dangerous if Democrats lose their congressional majorities next November, as the finger-pointing and blame-laying will rise to unprecedented levels. But with an incumbent president on the ballot, such fissures can be repaired. The prospect of another Trump presidency would be of immense help to Biden in his efforts to unify the party, much the way Bill Clinton and Barack Obama (and Ronald Reagan, for that matter) recovered to gain second terms in office after ugly midterm defeats.

But that’s if Biden does decide to run for re-election. Should the then 82-year old president choose instead to step aside, the selection of his replacement will divide his party even further. The nomination of either Harris or Buttigieg would almost certainly alienate one wing of the party or the other, and there is no other plausible Democratic presidential candidate on the horizon who appears capable of rebuilding those bridges.

The one political figure who can bring Democrats together, of course, is Trump himself. But progressives may feel that they sacrificed their ambitions for Biden in 2020 and could be less likely to do it again for an establishment figure like Buttigieg. Centrist Democratic party leaders would be more likely to fall in line behind a progressive candidate like Harris, but it’s an open question whether those working class white voters who shifted from Trump to Biden would switch back.

The biggest difference between Trump’s two candidacies in the eyes of many Democrats is that the theoretically prospective danger of 2016 had become a proven and tangible force after four years in office. There were already signs in this year’s Virginia and New Jersey gubernatorial campaigns that Trump was not nearly as effective a political weapon for Democrats as he had been a year ago. But while his name was not on the ballot in those races as would be the case in 2024, by then four years will have passed to potentially dull the memory of his presidency.

Harris and Buttigieg may both ultimately become top-flight presidential candidates at some point in the future. But right now, Biden is by far the Democrats’ best bet to keep the party together as it prepares for the possibility of a third consecutive face-off with Trump. So assume that the speculation about the president’s age, health and resolve will keep growing.