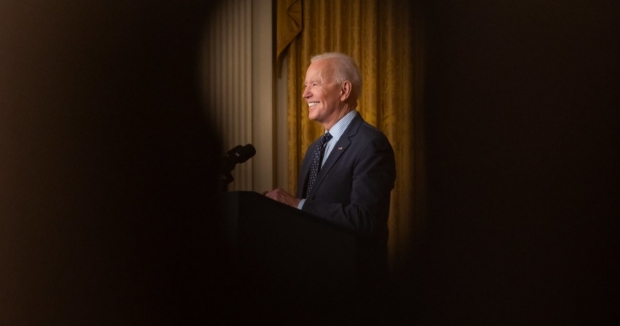 President Joe Biden spoke at the National Constitution Center in Philadelphia this week, where he called the debate over voting rights “the most significant test of our democracy since the Civil war.” The next day he went to Capitol Hill for his first closed-door session with Senate Democrats to rally them in support of his legislative goals on… infrastructure.

This isn’t intended to minimize the importance of the multi-trillion dollar plan that Biden has fashioned to move the country toward economic recovery, and certainly a president can and should have more than one policy priority for which he advocates. But in addition to infrastructure, Biden has allies who would argue that climate change, immigration, police reform, health care, education policy and the coronavirus are all top tier goals for this administration. Which creates a very crowded agenda and an equally complicated messaging challenge, the combination of will make it much more difficult for him to mobilize the country toward action on rules for voting and voter registration.

The question is whether Biden does actually consider voting rights legislation to be an existential matter for our democracy, or whether he is simply pacifying those voices in his party who do believe that voting reform rises to that level of consequence. Comparing a nation’s challenge to the Civil War is pretty big stuff, and it would logically follow that a president would spare no effort to move us toward wartime footing. But while Biden has raised the volume on this issue in recent days, there’s little evidence that the president and his administration are willing to take the necessary steps to accomplish that goal.

What would be required to pass this version of voting legislation through Congress? The only plausible path would be the suspension or elimination on the filibuster. Growing numbers of Democrats, including Biden’s former employer Barack Obama, have argued that the historic traditional Senate rules that require 60 votes to move a bill forward should be abandoned. Biden does not share that belief, which is certainly his prerogative, but that decision does eliminate the only realistic path for passing the bill in its current form.

Biden’s other option would be to negotiate with Republicans in an attempt to find out if there is any potential for common ground that would allow him to accomplish some portion of his goals. In marked contrast to his efforts to forge bipartisan compromise on a traditional infrastructure bill, Biden’s team has made no apparent effort to explore such possibilities to stave off a Civil War-level threat to democracy. Senator Joe Manchin (D-West Virginia) did attempt such a negotiating strategy earlier this spring, but received little encouragement or support from either the White House or Senate leadership. Meanwhile, Vice President Kamala Harris, who Biden had appointed as his point person on voting reform, had almost no involvement in the Senate’s deliberations and instead spent most of her time on the issue meeting with activists who were already supportive of the bill.

Motivating supporters is an essential component to passing legislation. But Biden lacks a sufficient base on voting rights to either pass the bill itself or to suspend the filibuster. So it would make sense for the administration to also be looking for ways to bolster their ranks. That type of thinking has been completely absent from Biden’s approach on this issue, which is even more noticeable when contrasted with his broader inclination toward bipartisanship.

The alternative explanation is that Biden recognizes that there is no real path for this version of voting reform to ever pass in the current Congress, and that he is simply using the issue to excite progressive activists as he works through messy compromises on other matters. The proposal includes expanded public financing of campaigns and other long-held liberal goals, but does not address the confusing rules regarding vote counting and election approval that arose after the 2020 vote. And if Biden believes that the filibuster is an important instrument of compromise, it would be understandable why he does make an effort to get rid of it.

But at some point, Biden will be forced to either fight this battle with every weapon in his arsenal, or acknowledge that the voting rights debate has more to do with symbolism than substance. Language about the Civil War has tremendous emotional resonance, but Biden will ultimately have to put more political capital behind this effort or scale back on the heightened rhetoric.

Want to talk about this topic more? Join Dan for his weekly webinar “Politics In The Time of Coronavirus” on Tuesday mornings at 11 AM PST. Or read more of Dan’s writing at: www.danschnurpolitics.com.