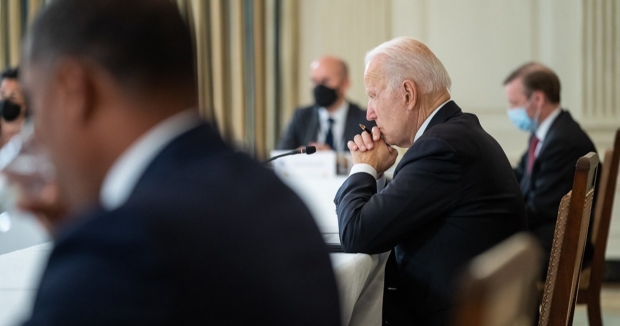 It hasn’t been a good month for Joe Biden.

Voters overwhelmingly disapprove of the way his administration conducted its withdrawal from Afghanistan. There are wildfires in the west, hurricanes in the east and the growing potential for congressional gridlock in Washington. The economy seems to be stagnating and school re-openings around the country have been marked by confusion and disarray.

But the big problem – both for the president and the country – is the coronavirus. It was only a few months ago when most of us believed that vaccines made us invulnerable. But the emergence of the Delta variant and the speed with which it has swept through the unvaccinated population has led to immense increases in the number of cases, hospitalizations and deaths. Even though the outbreak has not reached previous heights, it has now outpaced the rates that were seen in this country last summer.

The effect on Biden’s poll numbers has been predictable. His popularity among independent voters has fallen precipitously, both because of specific concerns about the economy and the virus, but also because these challenges have begun to undermine Biden’s broader message of competence and experience that elevated him to the White House last year and sustained him through his first months in office.

Biden and his advisors have come to realize that as long as the country is not making more progress in the fight against the coronavirus, the rest of his policy agenda will be even more difficult to achieve. And if he is not able to reverse his slide in the polls, the likelihood of Democrats maintaining their narrow congressional majorities in next year’s midterm elections will shrink as well.

So Biden needed to do something dramatic in order to shake up the landscape, to lay out a far more aggressive strategy for fighting the pandemic than he had to date — even if it meant risking a strong pushback from his political opponents. The president has been encouraging conservative voters in red states to get vaccinated for months now, but has made only incremental progress. Now, for reasons having to do with both public health and political survival, Biden realized that he had to get much tougher, much louder and much angrier.

The result was a highly-touted six prong strategy for fighting the virus that he laid out on Thursday night in a national television address. Five of the six prongs, while substantively important, will receive relatively little attention from the political class. Booster shots, school openings, increased testing, small business loans and improved care for those with COVID-19 are all reasonable steps which will provide some health and political benefit.

But the big ticket item was Biden’s call for vaccine mandates, not just for government employees and contractors, but for tens of millions of Americans who work for private sector companies with more than 100 employees. His vaccine mandates for government employees no longer allow for the option of frequent testing, an alternative which most state and local mandates had allowed. And his far-reaching order was accompanied by newly antagonistic language toward the unvaccinated. The calm and encouraging president of the last several months was gone, replaced by an exasperated and angry chief executive who had finally had enough.

“We’ve been patient, but our patience is wearing thin,” Biden said. “And your refusal has cost all of us.”

The White House staff knew that their strongest adversaries, Republican officeholders and conservative leaders across the country, would be furious. GOP politicians quickly vowed to fight the mandate and their supporters will be newly energized in their animus toward Biden. But the president and his advisors recognize that along with the surge in cases over the last few months has come a similar growth in the level of resentment that the vaccinated are feeling toward those who have resisted or refused the shot.

Biden’s team understands that Donald Trump’s loyalists will never come around on this issue, and they have decided that picking a fight on vaccines with Republican political leaders could be an effective strategy to regaining their footing in the political center. Those same swing voters who have strayed from Biden over the last several weeks are tired of the coronavirus too, and maybe picking a fight with the vaccine resistors can allow Biden to win back those lost independents and get his presidency back on track.