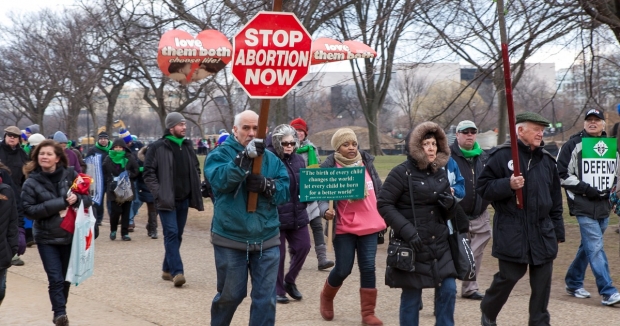 Perhaps the greatest political irony of recent times may soon come our way, in the aftermath of the Supreme Court’s decision on the fate of Roe vs Wade next summer followed by the outcome of the congressional midterm elections a few months later.

Up until now, it has appeared that a combination of historical trends, Covid persistence and dramatically-altered debates on issues like crime, immigration and inflation have conspired to make a Republican takeover seem almost inevitable. But as the nation’s highest court considers the future of legal abortion in this country, an extraordinarily incongruous question is emerging:

Is it possible that Donald Trump’s court appointees could save the Democratic majorities in Congress?

For many years, public opinion polling has shown that pro-life voters are more likely to be motivated to turn out on issues relating to abortion than pro-choice advocates. While the balance nationally between pro-choice and pro-life voters is roughly equal, and while a majority of Americans support the preservation of Roe vs Wade, Republicans have generally been more successful at energizing their socially conservative base on this issue.

But with the existence of Roe potentially at stake next year when the Court rules on a challenge from the state of Mississippi, many abortion rights activists believe that such an existential threat could tilt the odds in their favor and create a groundswell in support of Democratic candidates.

In the hours after the justices heard arguments on the Mississippi case, Democratic leaders did sound much more invigorated by the prospect of a high-profile abortion fracas next fall than their GOP counterparts. While Democrats predicted that their candidates would rouse like-minded voters by promising to codify Roe’s abortion protections into legislation, Republicans offered a much more cautious response, suggesting that economic and pandemic-related issues would still be top of mind for most voters. But while there’s certainly no guarantee that midterm elections driven by abortion politics will save the Democratic majority, it does represent the most plausible path toward that outcome than has been evident for many months.

The question to consider, though, is whether such results next November require a complete elimination of Roe, or whether less dramatic restrictions on abortion would have the same effect.

The six Republican-appointed justices all seem eager, to varying degrees, to impose stricter limitations on legal abortion. Chief Justice John Roberts, as always seeking potential common ground, floated the idea of allowing Mississippi’s 15 week limit to stand without confronting the core concept of Roe. And polling shows that a majority of Americans believe that abortion after the first trimester should be restricted (although not completely eliminated)

While a ban after 15 weeks would shrink the current viability threshold of 22-24 weeks by as much as two months, such a reduction would fall squarely within the parameters of public opinion. Which means that weakening Roe vs Wade, as opposed to a complete reversal of the decision, might not be the golden ticket that many Democrats anticipate. This raises the question of whether the majority’s true target is not Roe, but rather the 1992 Planned Parenthood vs Casey decision which established the concept of an “undue burden” standard to assess abortion restrictions. The distinction between legal and illegal conduct is an extremely stark one, but whether the obstacles to abortion access are overly burdensome is much murkier, and may offer some protection against backlash.

But suppose that the other five conservative justices ignore Roberts’ efforts toward compromise and vote to completely overturn the original decision. Then it becomes easier to see how an aroused Democratic base combined with a pronounced shift of suburban women swing voters to the left could keep Nancy Pelosi and Chuck Schumer in their current jobs. The end result by this time next year would be the elimination of national abortion protections, in exchange for continued Democratic congressional majorities. (It would be interesting to poll both pro-choice and pro-life voters to find out which of these two outcomes they find more important.)

The fight would then quickly shift from the courts to Capitol Hill and to state legislatures across the country. Most estimates suggest that roughly half the 50 states would move to outlaw abortion while the rest would keep it legal. Which would divide Red and Blue America even further into even angrier warring factions.

But let’s save that conversation until the Court makes its decision. In the meantime, there are plenty of more immediate and tangible arguments to drive us apart.