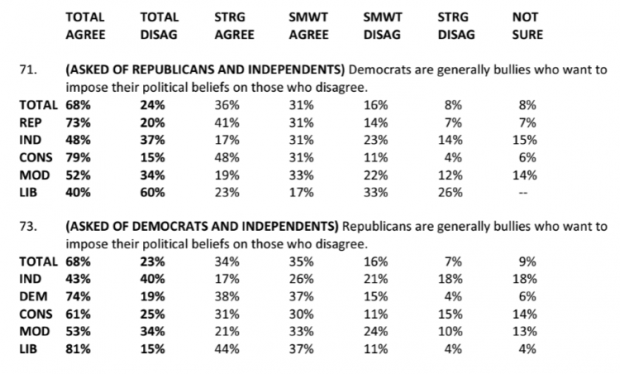 data from University of Chicago

The University of Chicago Institute of Politics recently released data that shines light on the state of political polarization and discourse in the nation.

Many of us feel the toxicity of our current political landscape, and the polling data reflects this in a few ways. Forty-nine percent of respondents say they avoid talking about politics with others entirely because they are unsure where other people stand on issues, while 16% have considered moving to someplace that shares more of their values — 4% actually moved somewhere more aligned with their beliefs. Some people report uprooting their lives and routines in order to relieve political tension, and it isn’t limited to their local lives.

Twenty percent of people polled said they stopped using social media because of the tone of the political conversation online, and a quarter have considered doing so.

The effects don’t stop there — 25% of respondents say the political climate in the country has made them physically ill.

It’s a well-known fact of human nature that we surround ourselves with people like us — but how much does this apply to political ideology? Apparently, a lot:

When asked, “Generally speaking, do you have friends or relatives who you believe have changed because of the media they consume?” 49% answered yes. Among this cohort, some say they have seen relatives succumb to conspiracy theories and what they consider to be offensive beliefs. Thirteen percent of respondents have stopped speaking to a relative because their political views are too offensive, and 20% have considered doing so.

When we retreat from those who hold different political beliefs — or even beliefs we consider extreme — we can overrepresent them in our minds. We start to believe they are malicious and untrustworthy. If we don’t interact with them, we have no way to humanize them and counteract that narrative.

The UChicago data shows that 68% of Republicans and Independents think “Democrats are generally bullies who want to impose their political beliefs on those who disagree.” The number was also 68% when Democrats and Independents were asked the same statement about Republicans. This demonstrates the malice we so often imagine of the other side.

We can see the impacts of this mistrust in the following data:

Further, when asked, “Thinking about people who you disagree with on political issues, do you believe that the root of the problem is that they are misinformed because of where they get their information or just an honest disagreement?” 53% of people said the other side is misinformed.

Some may see people in the opposite party as a mix of malicious and misinformed. When Republicans and Independents were asked whether “Democrats are generally untruthful and are pushing disinformation,” 65% agreed with the statement.

Democrats responded similarly. When democrats and independents were asked whether “Republicans are generally untruthful and are pushing disinformation,” 64% of Democrats and Independents agreed with the statement.

A Reason for Optimism

Amidst the political turmoil of the country, 18% of Americans say they have actively sought out relationships with people who hold different political views from them.

This data highlights the rocky position of our current political discourse, but it also shows that people want change. People want to trust their close family and friends again and be able to understand them. We can only hope that those wants soon become a common reality.